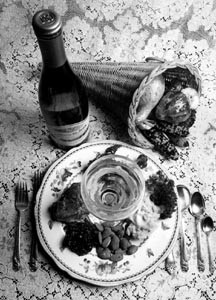 Centerpiece: Give thanks for fine wine.

Popping corks for turkey, ham, and other holiday fare

THE ANNUAL transformation of otherwise vacant expanses of land from pumpkin patches to Christmas tree lots is under way throughout Sonoma County, and that can mean only one thing: The time has arrived to begin planning the traditional Thanksgiving meal.

Ever since President Washington proclaimed the first Thanksgiving Day on Nov. 26, 1789, turkey has been the main course of choice among most families. The waist watchers among us know that a three-and-a-half-ounce serving of white turkey meat sans the skin contains only 115 calories. So how come we’re always reluctant to step on the scale the morning after Thanksgiving? The responsibility lies with all those other mouth-watering dishes that blanket the table: stuffing, mashed potatoes and giblet gravy, candied yams, cranberry sauce, corn bread …

This eclectic combination of flavors and spices not only causes the calorie count to soar, it also makes selecting the “perfect Thanksgiving wine” next to impossible.

A soft, buttery chardonnay might match well with the turkey, but its delicate flavors would dissipate when consumed with the yams. Likewise, the subtle nuances of a well-aged cabernet sauvignon would go nearly unnoticed because of all the food flavors with which they’d be competing. Substitute ham for the turkey … or add ham to the mix … and the “matching game” becomes even more challenging.

Generally speaking, wines with bright and lively fruit flavors make the best Turkey Day dinner companions. Younger wines, though they may lack the complexity that develops with time in the bottle, typically are very fruit-forward.

No wine better defines “fruity” than Beaujolais Nouveau, the first-of-the-vintage wines from France that hit American soil about this time each year. A growing number of California wineries are releasing similar bottlings, and meeting with solid commercial, if not artistic, success. For me, nouveau wines–whether imported or domestic–are pleasant quaffers, but they’re nothing to write home about. A special day like Thanksgiving demands special wines.

So what’s a Thanksgiving dinner host to do? Pick up not one, but three or four bottles of different wine varietals to match the various dishes you plan to serve.

The shopping list that follows utilizes a scoring system of one to four corks for the wines: one cork, commercially sound; two corks, very good; three corks, outstanding; and four corks, exceptional.

Stonestreet 1995 “Upper Barn Block” Alexander Valley Chardonnay
A big wine (its 14.2 percent alcohol is among the highest I’ve seen in a chardonnay) with an apple butter flavor and a long, lingering, buttery finish. 4 corks.

Trentadue 1994 Old Patch Red
A blend of zinfandel, cabernet sauvignon, and various Rhône varietals from several vineyards around the county, this is a pleasing wine with lots of bright red fruit flavors. Another good value. 3 corks.

La Crema 1995 Sonoma County Reserve Zinfandel
Spicy red raspberry aroma and flavor, with a touch of black pepper in the back end. Rich and racy. 3.5 corks.

Pedroncelli 1995 “Mother Clone” Dry Creek Valley Zinfandel
Spicy vanilla and concentrated red fruit flavors, accompanied by a sweet berry aroma that makes the wine almost as much fun to smell as it is to drink. 3 corks.

And with those spicy side dishes, try the Edmeades 1995 Eaglepoint Vineyard Zinfandel (3.5 corks) or the Beringer 1996 California Gewürztraminer (3 corks).