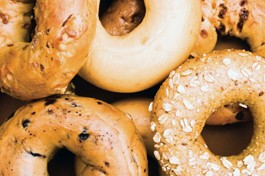 Our (fairly silly) search for perfection in the bageling arts

When you scarf a bagel virtually every day of your life, it damned well better be a good one. I do such scarfing, and when my beloved Marin Bagel Co. all of a sudden went kaput, I was forced to mount a desperate bagel chase that stretched from Sausalito to the hinterlands of Santa Rosa and sideways to Napa.

I am here, however, to discuss a matter of much nearer importance. Where do the best in the North Bay come from? And can they hope to touch Cleveland? Ours come close, but no touching, please.

The exogenous bagel was either birthed in Poland, where beygls were first given in 1610 as gifts to women in childbirth, or in Vienna, where a Jewish baker created the delicacy in 1683 as a gift to the ruling king. The Viennese story claims it was shaped like a stirrup (or a horseshoe—tales vary), which in German is beugel. Thus sort of comes the word. (Some say that better than a bagel is a bialy, a smaller, drier, oniony version of its bigger brother, too rare around here to be treated further in this less than scholarly treatise.)

These beygl / beugel stories may be apocryphal. What we know, more prosaically, is that the word came from the Yiddish beigl, the familiar torus traditionally made of a yeasted wheat dough, perhaps sweetened with brown sugar, rolled then formed into a ring, boiled in water and baked. And if it ain’t done that way, it ain’t a bagel. Not a real one, anyhow. Not a real good one, for sure.

One selects a bagel first by hefting it as one would a nice book. Since it’s unlikely to be available for this purpose, this must be done by eye. Though perhaps small, it should at least look heavy. Lightweight bagels are for lightweight-bagel persons. Its size and shape and the curve of its hole, even the lack of a hole, are of little importance. For the seed-seeking bagelophile, seeding on both sides is a definite plus. If you don’t believe me, try offering an unseeded bottom to a loved one as you munch the top. But ultimately, the only test that really matters is taste.

Healthiness? Must we really talk about that? Well, not without comparing bagels to doughnuts, difficult to do because, with all the varieties of one versus the other, you’d be comparing apples to oranges.

Wanting to compare apples only, I chewed only one type of bagel, the sesame, on my searing search for the best, eschewing poppy seed, garlic, onion, rye, everything, salt, cinnamon, raisin, pumpernickel, blueberry, egg (echhh!), sourdough, asiago cheese—I haven’t the space or the stomach to list all that are available. The test was not blind, but you should know that no one paid me to eat these bagels except the Bohemian itself. I can’t be bought by bagels alone.

I preferred, but didn’t demand, that the bagelry be a place with “Bagel” in its name, and be artisanal, not a chain like Noah’s, not a supermarket, coffee shop or patisserie.

Also, whether the bagels are hand-formed or extruded by machine, water must be used in their making. That cakey, fluffy, lightweight, waterless bagel you find in the freezer section at your super? Feh and double feh!

Never having speed-dated bagels before, I was surprised to find myself—if underwhelmed by a few—seriously knocked out by several. My choice of the top was not far from the bottom. Translation: while our best are awfully damn good, our worst aren’t far off. And geography has nothing to do with it.

But our single best, in one man’s highly subjective opinion? The one I’m going to down for the next 364 breakfasts? Barton’s, San Anselmo’s little storefront bagelier. Barton’s bagels are medium-sized, nicely seeded top and bottom, and they’re wonderfully dense and chewy for bracketing lox and cream cheese when untoasted, and perfect when they are, giving up the kind of sweet that your mother ascribed to things like potatoes and Brussels sprouts.

Almost as good are Sonoma’s Homegrown and Sonoma Valley Bagel, Napa’s Golden and Sausalito’s smaller but delicious offerings from Bridgeway Bagel. All told, our Left Coast Bay-gels roll well with the Right Coast’s. Try one. It’ll lift your life up a nosh.