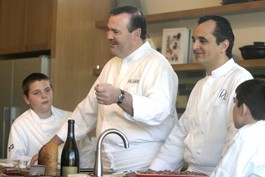 At the recent Pigs & Pinot event, chef Charlie Palmer dissects the elements of an elegant pig

F rom snout to tail, rustic pig is all the rage these days with top chefs. So celebrity chef Charlie Palmer, founder of the all-things-hog Pigs & Pinot festival held March 14–15 in Healdsburg, had a pivotal tip for would-be cooks hoping to duplicate his exquisite porcine cuisine at home.

“Become a good client in a very good restaurant,” he said, looking up from a pan of veal stock he’d been reducing for a sauce to serve over slow-roasted pork cheeks. “Spend a lot of money there and make friends with the chef. Then, when you need special ingredients, like a couple of pounds of cheeks or a few quarts of stock, he’ll give them to you.”

He flashed a grin to show he was joking. Or maybe that he wasn’t.

It may have been an odd thing for a chef to say in the middle of a Saturday-morning cooking class he hosted as part of Pigs & Pinot—particularly one where attendees had paid $150 for the privilege of uncovering a famous kitchen master’s deepest secrets—but it was refreshingly realistic.

Because, while the premise of the class, staged as a centerpiece to the third annual gala, was to demonstrate how to turn inexpensive cuts into something sublime, what students really learned was this: Crafting rustic pork parts into something special can be pretty hard work. As Palmer led students through two hours of slicing, dicing, mixing and mashing, it became increasingly clear that the reality of transforming trotters to estouffade might be better left to the professionals.

As pig offal—those oft-tossed parts like cheeks, head, feet, tail and internal organs—has become increasingly popular on expensive restaurant plates, its recipes have garnered great appeal. What was once peasant food is now immensely popular with the high-end set, showing up at such classy spots as Bovolo (Healdsburg), Zazu (Santa Rosa), Santi (Geyserville), Syrah (Santa Rosa), Madrona Manor (Healdsburg) and Palmer’s own eatery, the Dry Creek Kitchen adjacent to the Healdsburg Hotel. The Secret Eating Society hosts its own take on offal from a wide range of animals April 12 in conjunction with Amphora Winery.

And why not? The idea of filling our kitchens with excellent, savory, piggy-rich smells is seductive; impressing our friends with homemade pâté is noble. Except how many typical home chefs really want to spend hours doing what the chefs do: slaving over a hot stove making stock (roasting bones and vegetables, skimming froth, simmering up to 14 hours, sieving and such)? And if we did, how many typical grocery stores keep offal in their coolers for an impromptu meal of blood sausage? (Santi chef Dino Bugica, for example, crafts his with pork skin, back fat, pine nuts and currants.)

Working with his partner chef Philippe Rispoli (trained at Daniel Boulud Brasserie at Wynn, MGM Mansion and Charlie Palmer’s Aureole of Las Vegas), Palmer demonstrated the long road taken to turn leftovers into luxury. A pâté de champagne blends boneless pork shoulder, pork belly fat, veal escalope and chicken livers with pistachios and cognac under a thick, glistening cummerbund of barding fat. He made it look easy at first, feeding the chunked meat into a big, shiny red grinder set up on the counter of the new Relish Culinary Adventures cooking center that’s opened in a beautiful building next door to the Healdsburg Hotel. The recipe is also a great way to use up scraps of venison, duck, what-have-you from your hunting trips, he said.

Yet after its approximate three-hour prep and cooking time, the pâté should sit for at least three days, so its flavors can intensify.

“Make it Sunday,” he shrugged, sprinkling quatre épices into the meat mixture for a heady aroma of cinnamon, clove, nutmeg and pepper. “Make a lot. Eat it all week, and give a couple [terrines] to your neighbors.”

Then call the paramedics. Because while savoring old-fashioned pork isn’t easy, Palmer isn’t pretending it’s healthy, either. Acidic pairings are necessary to cut the pure grease and make it so delicious, he explained, which is why many countrified pig plates come with cornichons, powerful mustards (homemade, of course) or, naturally, a perfect Pinot.

The best way to make a dish like Palmer’s braised pork belly with caraway and sauerkraut is to start with belly (bacon that’s uncured and unsmoked) from a heritage farmer, Palmer and Rispoli said. Heritage pigs are allowed to roam free, feed their natural omnivorous diets and develop deep-red, fatty meat. Commercially raised pork becomes “the other white meat” only from anemia, which is why it’s lean yet often dry, bland and tough. (A recent Cook’s Illustrated test, in fact, found that heritage breed pork butt has 50 percent more fat than supermarket butt, while old-fashioned pork chops tip the chart at 210 percent more fat than the usual grocery staple.)

Asked where to locate the specialty meat, Rispoli held up a snapshot of two handsome, spotted Berkshire pigs and pointed to a gentleman sitting in the back row of the class. His family farm raises boutique animals in Missouri, and what the students had been sampling was donated by a six-month-old pair weighing in at about 225 pounds each.

After securing the belly, the intrepid chef needs to cure it. After a deep caramelizing in oil, the meat, so fatty that it’s self-basting, is slow-braised for several hours until it emerges from its bath of white wine, onion, potatoes and sauerkraut gorgeously succulent; it bites tooth-tender then melts into the mouth with a rich, creamy center.

Palmer arranged the finished cheeks on a dollop of ultrasmooth polenta, which had magically appeared from Relish’s rear kitchen. The meat had been braised in Pinot, chopped heirloom tomatoes and a flurry of plucked-from-the-earth root vegetables, and its savory juices seeped into the grits. Barely two ounces of meat made each serving, yet it was lusty enough to almost make a full meal.

These aren’t dishes he makes at home, he admitted as the students devoured his handiwork. Rather, a quick meal at casa de Palmer might be a much simpler crispy panko pork schnitzel with fresh-squeezed Meyer lemon. He also doesn’t use lots of gadgets like he had in the Relish kitchen, or numerous pots and pans, because someone (him) has got to clean it all up.

Palmer didn’t need to voice his final tip. After all, the current “spring neighbor menu” at Dry Creek Kitchen features a course of slow-braised kurobuta pork cheeks in a Szechuan pepper-corn-infused pork jus. The only thing required to make? Reservations.

H ere’s an elegant riff on pork and beans that’s far removed from Van de Camp’s. Yet the premise still holds for that wonderful pairing of legumes and pure pork blubber: the fat rounds out the beans’ earthy flavor and makes a simple dish impossibly rich and savory. The boiled technique utilized below is a riff on the Italian “bolliti misto” style of cooking that adds extra flavor to the lentils. The recipe comes from Charlie Palmer’s “try this at home” recommendation.

Serves: a lot. Plan a dinner party, or freeze in small batches for multiple meals.

Thickly slice all the pork, except for the spare ribs. Place all the pork, spare ribs, salted loin, ham and pork belly in cold water for at least two hours. Rinse all the pieces, place in a stock pot and cover with plenty of cold water, bring to a boil, skim thoroughly and reducing heat to simmer for one hour. Pick over lentils, then wash, drain and place in a saucepan. Cover with water and cook for 15 minutes. Drain lentils and add to the meat. Add onion, carrots, leeks, bouquet garni and peppercorns. Simmer for 45 minutes, skimming from time to time. Add sausage, then cook for another 40 minutes. Remove all the meat and reserve in a warm place. Discard the bouquet garni and drain the lentils. Place in a large serving dish and arrange the sliced meat on top; drizzle with reduced balsamic vinegar (see below).

Put vinegar in a small saucepan and reduce over medium heat until vinegar is thick and syrupy. Drizzle over sliced meat and lentils.