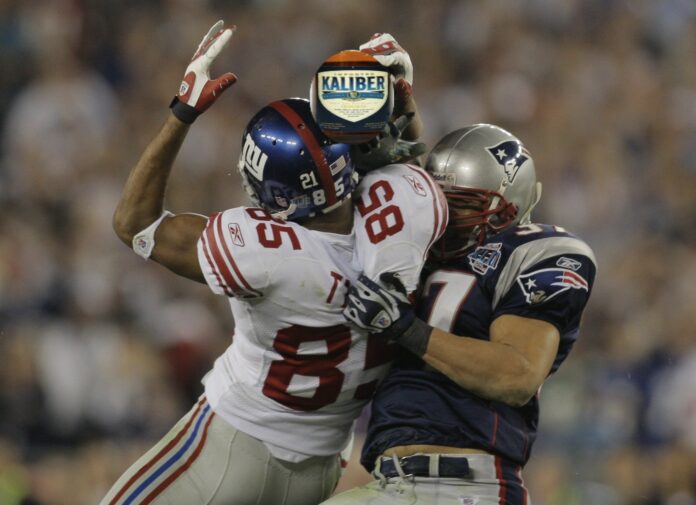 Catching a game of football with non-alcoholic beer

The year was 2008 and the New York Football Giants were in the Super Bowl. I was sober and single, living in New Haven, Connecticut, and I settled in for the game.

And what a game it was!

On the menu: A six-pack of Kaliber non-alcoholic beer, and a bag of peanuts in the shell. A pile of socks and other random stuff next to my chair, to throw at the television as the incredibly tense game wore on.

That was, perhaps, the greatest night of my life. Sad, but true. The New York Football Giants won the game, now considered one of the Greatest Super Bowls Ever. A true nail-biter. I must have thrown 50 socks at the TV that night.

(Oh, you say: “The Catch” in these parts refers to the Joe Montana to Dwight Clark end-zone game capper in the 1982 NFC championship. Nice catch, Clark, and thanks for beating the hated Cowboys—but that was no Tyree grab. I’ll fight anyone for bragging rights to “The Catch.”The loser’s on the hook for some tasty fake beers.)

I drank that whole dang six-pack of Kaliber that night and felt like a drunken reveler when those last seconds ticked off and the Giants had, very improbably and with the miracle of The Catch, won the game. I toasted the Boys in Blue with that final Kaliber, collected the socks, and went to bed. In the morning: No hangover!

Hangovers suck, I try to avoid them whenever possible, and, as such, I’ve tried just about every available non-alcoholic beer there is on the market. My taste for the stuff is split across two poles: I love the extremely bland Busch non-alcoholic beer, mostly because you can drink ninety cans and feel you’ve done a fine job of hydrating yourself. It’s healthy!

On the other end, the delicious, nutritious Kaliber, which is made by the Guinness folks, has that same rich, creamy and slightly bitter backbite that characterizes the stout. It’s the upper-class non-alcoholic beer, and for my money, anyway, it blows all the other high-endish non-alcoholic offerings out of the water.

The popular St. Pauli Girl non-alcoholic version is one that comes to mind, and I’ve tried it. I’m a pretty bitter person at times, but even that stuff is too much for me.