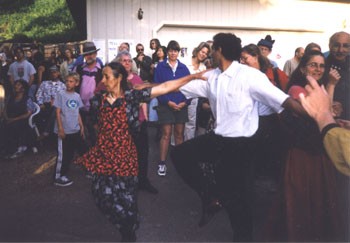 Roma Around the World: The Herdeljezi Festival celebrates Roma culture.

In the West, Gypsies have long been the stuff of fairy tales, horror stories, and misconceptions. Mythologized in films and folktales as spell-spinning loons or dirty street riffraff, modern Gypsies–or Roma, as they are properly called–have a public relations nightmare on their hands.

And sadly, the lives of the Roma are stricken with poverty, persecution, even genocide in their native land of Kosovo.

Roma culture travels annually to West Sonoma County in the form of the Herdeljezi (hayr-je-lay-see) Festival, now in its seventh year. The Sebastopol group Voice of Roma, whose mission, according to founder Sani Rifati, is “fighting the stereotypes about Roma,” coordinates this annual celebration of spring. There are 20 million Roma all over the world (“the second largest people without land, after the Kurds,” according to Rifati), and one million in North America.

The festival originated in Graton as a backyard party at the home Rifati shares with his wife, Carol Bloom, “because it’s the beloved holiday of the Romani people and he missed it,” said Bloom. The first was attended by 96 neighbors.

“It’s important to know your neighbors,” says Rifati, speaking of the close-knit community of the Roma.

“People were expressing that to him in many ways,” adds Bloom. “They loved the preparation as much as the festival itself. Coming together, cooking together, dancing, telling stories, and making things happen together, not on the clock–they felt that was lacking here.”

The following year, the party was held as a fundraiser for the Romani people; $2,500 was later delivered to Kosovo by Rifati and Bloom, mainly for wheat and firewood. All the money raised by Voice of Roma is given directly to the people there.

In 1999, when it was becoming clear that NATO was going to attack Kosovo, Rifati’s mother visited Graton, directing the cooking for 500 people. The festival that year included political speakers such as Michael Parenti.

Since the war, the population of Romani in Kosovo has been reduced from 120,000 to 20,000, says Rifati. Many are homeless refugees interned in “internal displacement camps.”

“In a free, ‘democratic’ Kosovo, Roma cannot go out to shop, cannot speak their mother tongue, children cannot go to schools, parents cannot work, they have no healthcare,” says Rifati. “If you don’t have a birth certificate, you count for nothing. In a country run by Albanians, they do not provide birth certificates to Roma.”

With the need so great, this year’s celebration is more ambitious than any preceding it. To be held May 2-3, the festival includes a Friday night concert at the Sebastopol Community Center and a daylong festival on Saturday in Ives Park.

Unfortunately, the anticipated headliner, celebrated musician and remarkable Romani humanitarian Esma Redzepova, will not be there. Voice of Roma felt it was not safe for her and her ensemble, a band of master Macedonian Romani musicians, to travel. The U.S. Embassy in Macedonia closed at the start of the war (it has since reopened), making visa arrangements difficult.

Worse was the possibility that the visitors might be stopped at the border or even arrested. “They are all fairly dark-skinned and have Muslim surnames,” says Bloom. “We were worried that they would be targeted by the INS or customs or airline security because of the color of their skin and because they would be carrying instruments, arousing suspicion and more scrutiny.”

With that decision, months of preparation went down the tubes.

In addition to the Sebastopol event, the “queen of gypsy song” and her ensemble were scheduled to go on to a 25-location tour of the United States, raising funds for the people at home.

“She’s one of the first women in the Balkans to perform as a singer, let alone Romani. She’s very outspoken,” said Rifati. “When Macedonia wouldn’t let in refugees from Kosovo, she made a scene in the government office and brought them in.” Redzepova has twice been nominated for the Nobel Peace Prize.

On the cancellation of the tour, Redzepova told Rifati, “I am very sad not to be able to come to America. . . . I am wishing that the day will come soon when we can all sing and dance together in peace.”

The Herdeljezi Festival, featuring performances by Kitka, Edessa, Anoush, and more, runs May 2-3 at Sebastopol Community Center and Ives Park. Proceeds will benefit the Roma people.