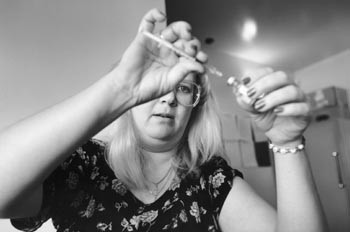 Shot in the Dark: After 10 years of intravenous drug abuse, Carly McFarland has turned to regular alpha interferon injections to control a potentially fatal liver disease.

C LEAN FROM intravenous drugs for 10 years, she thought that months of always feeling tired were the result of turning 40 years old. But after she got blurred vision, extreme nausea, insomnia, and pain in “the upper quadrant of the abdominal area,” Carly McFarland saw a doctor, was diagnosed with hepatitis C–a potentially fatal liver disease–and began treatment with alpha interferon.

“It is working,” says McFarland, a parts manager in a Santa Rosa copy company. “I passed the three-month test. It had decreased my viral load from 2 million to 5,000.

A large protein produced by virus-infected cells, interferon inactivates viruses. But boosting this natural resistance to infection hasn’t been easy.

When asked if she has side effects from alpha interferon, McFarland says, “Oh, yes, lots. General anxiety, joint pain, I feel like I have arthritis all the time. Nausea, major nausea: the first few weeks I threw up a lot, but that passed. A lot of tiredness, sickness, achiness; you feel like crap all the time. But, hey, if it’s going to work, I can deal with crap for a year.”

The recent deaths of two local HCV-infected drug treatment workers and the ominous results of newly available blood tests have put hepatitis C virus center stage in the minds of Sonoma County public health officials, who say they are in dire need of federal and state money for public education and testing.

HCV spreads through contact with blood and causes death through cirrhosis of the liver. Unlike with other types of hepatitis, no vaccine or cure exists for HCV. The only known treatment is expensive and ineffective in more than 50 percent of patients. Five to 10 percent of those infected are expected to die from virus. People commonly contract HCV from contaminated intravenous drug injections and blood transfusions.

Country singer Naomi Judd, who retired from the stage in 1991, is the most famous victim of the potentially fatal liver disease.

Last month, a symposium about HCV, hosted by local public and non-profit health agencies and held “by popular demand” on a rainy weekday afternoon at the Santa Rosa Veterans Building, drew over 100 people, including many from the drug-abuse recovery community. The event was inspired partly by the deaths of Doug Patricks, former director of the Santa Rosa Treatment Program, a methadone clinic treating heroin addicts, and Ronnie Ruggles, a psychological technician at the Drug Abuse Alternative Center.

“It feels like where HIV was 15 years ago in terms of knowledge,” says Michael Spielman, DAAC’s executive director.

The largest group of people highly at risk are those who have taken drugs intravenously anytime in the last 30 years. A smaller but equally at-risk group includes hemophiliacs and other recipients of clotting-factor concentrates before 1987. Other groups at risk include a broad swath of mainstream society–anyone who received a blood transfusion or solid-organ transplant before 1992 has a 6 percent chance of infection. And for nearly half of all transmissions of HCV, there is no medical explanation.

Evidence shows that HCV can be contracted also by snorting cocaine if infected blood gets onto a straw used for inhaling cocaine and then passed around.

HCV makes even sharing a shaving razor or getting a tattoo a possible health risk. “Tattooing is a potential risk of transmitting the virus, of course, if the person doing the tattooing doesn’t clean his needles properly, tattoos somebody who has hepatitis C, and then tattoos you,” says Dr. David Staples, a physician who specializes in the treatment of HCV.

Because HCV has a latency period of 20 to 30 years, officials say people who experimented even just a few times with intravenous drugs decades ago may only now be feeling symptoms. About 1.8 percent of the population is thought to carry the virus.

In Sonoma County, of 280 cases detected last year, 10 were acutely ill. In all, fewer than 1,000 cases of HCV have been officially tallied in the county, but thousands more residents are thought to be unknowingly HCV-positive. Nationally, 4 million people are infected, and 30,000 new cases are identified each year. HCV is now the leading cause of liver transplants. The 8,000 yearly deaths from HCV are expected to triple in the next 10 to 20 years.

The cause for concern among health officials is the lack of awareness and late-breaking knowledge of HCV. Blood tests have been available only since 1990–a very brief period from a medical perspective.

Lee Tillman, director of the Santa Rosa Treatment Program, says his facility inadvertently began testing methadone clients for HCV only a year ago. Tillman says a survey of methadone clients revealed much ignorance and denial of HCV.

“We are making a lot more diagnoses because we are able to make a diagnosis now and we weren’t able to before,” says Staples. “And there is a tremendous population out there that were infected back in the ’50s and ’60s, when they were doing drugs for a short period of time, got infected then, and are being detected now.”

Spielman says about 85 percent of Sonoma County’s estimated 10,000 intravenous drug users, past and present users of heroin or methamphetamine, are probably HCV-positive. “Those people would be highly at risk, and they are not being regularly tested,” says Spielman, “It’s a rare, rare case when you hear about a person who cleaned up 10, 15, 20 years ago who doesn’t have hep C.”

The county public health department does not offer testing.

“We don’t have the resources to go out and test all of the populations that need to be tested,” says Dr. George Flores, the county’s public health officer. “We don’t even offer hepatitis C testing through the public health department in this county. We refer people to their own physician for that testing. That could be costly. Especially people who don’t have insurance have a barrier there.”

The two tests for HCV cost over $100 each, adds Flores.

“The federal and state government needs to step on board with this and make resources available,” insists Flores. “This is not just a county issue. In fact, it’s a nationwide issue, or international issue. We’re finding that many countries around the world have the same problem.

“Hepatitis C is like an iceberg. We’ve only seen the tip of this iceberg.”

In fact, the state government has joined the fight against HCV. State Sen. Richard Polanco, D-Los Angeles, introduced Senate Bill 694 in late January “to develop a statewide strategy that encompasses diagnosis, prevention, and treatment,” according to legislative assistant Chris Flammer. “This bill includes the public health side of hepatitis C , as well as folks who are incarcerated. There is a tremendous problem among the incarcerated,” he says. “With our legislation we want to have some medical protocol on the treatment side, a decent state-wide game plan in respect to education about hep C, and for diagnosis. We want this to be a very encompassing, comprehensive piece of legislation.”

Flammer says the bill should be ready for the governor’s signature or veto by the end of August. Meanwhile a cure is “not on the immediate horizon,” and HCV patients must survive with less-than-perfect treatment. Doctors administer the expensive drug alpha interferon for an initial period of six months to reduce the “viral load” in some HCV patients.

“We are trying to develop a treatment that is more effective than what we presently have,” says Staples, “because I would be the first to admit that alpha interferon is not ideal treatment. It’s expensive. It has side effects associated with it. It doesn’t work nearly as often as we’d like to see it work.”

STAPLES recommends stress reduction and a high-fiber diet to all of his patients, but notes that healthy living is not a proven cure. “It makes common sense to lead that kind of lifestyle, but I can’t say it clinically makes a difference.”

For Rickey Summerfield, 43, a carpenter and drug addict hailing originally from Georgia, and suffering from advanced cirrhosis of the liver, only an organ transplant in August of last year could make a difference. “The hepatitis took me down,” says Summerfield with a gentle Southern accent. “Within a year’s time I went from healthy to ‘probably not going to last but a couple more months.’ If I hadn’t had a transplant in August I doubt I’d be speaking to you right now.”

Summerfield says his symptoms included severe mental confusion and water retention that caused him to gain 40 pounds in two weeks. Doctors had to literally drain the water out of his body. “It was really uncomfortable,” recalls Summerfield. “But it was a lot better than having the water inside you. I woke up one night and couldn’t breath. The fluid had backed up to where my lungs weren’t working correctly.

“For me, with the hepatitis and advanced cirrhosis, I compared it to rotting to death. My body was rotting on the inside–a real bad ugly feeling. I don’t think anything could be worse.”

One local drug treatment official said Summerfield was “extremely lucky” to get the liver transplant and patient-advocate doctor at UC Davis. Former drug addicts, he says, have virtually no chance for an organ transplant at San Francisco hospitals that have serious bias against such individuals. Death from cirrhosis, also called end-stage liver disease, comes from a variety of complications, including internal bleeding, infections, coma, kidney failure, or “just wasting away because the people become so weak and the liver fails to support them any longer,” explains Staples.

Staples says HCV is not a virus that is transmitted through casual contact, and people don’t have to be afraid of being around other people who have HCV unless they have some kind of intravenous exposure.

Without a cure, vaccine, or effective treatment to look toward, Spielman and Flores bang the drum of education and testing.

Spielman emphasizes that people who fit in any of the high-risk categories should get themselves tested. He also proposes needle-exchange programs. “If they have HCV, they can start living a more healthy lifestyle, just like with HIV,” he reasons. “There’s not really a cure for HIV, but there are things you can do. Alcohol is certainly the killer. If you have hep C, first you should stop drinking.

“HCV ties right back into needle exchange and the importance of stopping the spread of HCV, because it is a stoppable and preventable disease if people don’t stick their heads in the sand. Now that we have the test and HCV is out of the blood supply, the next step is to cut HCV out of the addict population by needle exchange.”

Flores warns against perceiving HCV as a disease that only drug addicts have. “Public awareness is very important around this,” pushes Flores. “Hepatitis C virus is not just a thing to say is confined to the substance-using population, because indeed it’s not. We need to become more informed across the board.

“Those who need to be tested include grandmothers and grandfathers, many of whom are in advanced stages now, having had a transfusion years ago.”