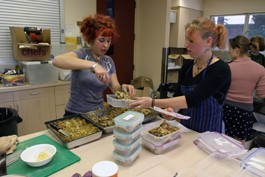 Cathryn Couch stands on the back deck of a professional kitchen on a recent chilly December afternoon while partygoers stream past her. As guests arrives, Couch hails each by name and offers hugs. “Do you still need lemons?” one woman asks. “Oh, my goodness, yes!” Couch exclaims. “Can you drop them off at my house?”

“No problem,” the woman says. “I have so many! I’ll stop by tomorrow.” She gives Couch another hug before going into the warm, fragrant kitchen, party sounds and good smells spilling out behind her onto the deck.

This party is a twofold celebration of chef Patti Stack’s new catering venture, Capers & Co., and an informal launch for Couch’s nonprofit, the Ceres Community Project. As with so many things in Couch’s professional life, the two intertwine to support each other perfectly. Stack can’t yet afford the full rent on the space that formerly housed the Patty James Cooking School in Sebastopol, and Couch needs a place for her team of some 100 teen volunteers to cook three days a week preparing nutritionally dense organic meals for 34 area cancer patients and their families. Also natural in Couch’s web of good karma, an “angel” has paid Ceres’ share of the rent in Stack’s kitchen for the next year, taking that one necessity off her plate as she moves her project forward.

A professional chef with over 15 years of experience, Couch is also an avid horsewoman. When her dressage instructor asked her to mentor her daughter in the kitchen, Couch cast about for a way to make the young woman’s time at the stove of wider benefit. Couch took the girl on one afternoon a week for seven weeks, and they cooked for a Sebastopol family in which the mother had breast cancer. Then they added another family where the mother was battling breast cancer. Then they added a man felled by a stroke. “The gratitude that people showed when they came to pick up the food really touched us,” Couch says. It also led to a terrific idea. “I woke up two weeks later and had a vision of the whole project. Nine months later, it was complete.”

On March 29, 2007, Ceres began. They had four families to feed and four students to help them do it. Drawing students from the Summerfield Waldorf high school simply because Couch knew some of the families there, they served 4,500 meals in 2007. By the end of 2008, they expect to have cooked, packaged, delivered and cleaned up some 20,000 meals. Today, students from 12 different schools ranging from homeschool programs to traditional area high schools to high schools for at-risk youth to culinary students from Santa Rosa Junior College participate.

Not that the Ceres Project isn’t a work in progress; it certainly is. Couch dreams large, and her dreams tend to vigorously come true.

In this instance, the dream is a reality with three goals. “We’re looking for foods that are maximally healing, organic and whole grain,” Couch says. But this is no sorry salad of broccoli and bulgur. Ceres’ recent Thanksgiving menu featured free-range turkey tenderloins with a plum sauce, stuffed portobello mushrooms and chard, filet of soul with mushrooms and greens, puréed kabocha squash with apples, and numerous other gourmet treats. Recipients indicate whether they’re able to eat dairy or other complex foods on a given day, as cancer treatments wreak havoc on appetites and retention.

Area businesses have been extremely supportive of Ceres, Andy’s Produce extending a $5,000 line of credit to get them started, Oliver’s Markets offering half-price discounts on meat and seafood, Gourmet Mushrooms providing free fungi, Redwood Hill Farms giving storage facilities and three Sebastopol farms donating produce: Dan Smith, the retired software entrepreneur who with his wife owns the French Garden Restaurant and Brasserie; the Lynmar Estate, an organic and sustainable family winery that maintains seven separate garden plots unrelated to winemaking as well as a head gardener in order to enhance their own lives and those of their guests; and Sebastopol’s biodynamic First Light Farm, a new west Sonoma County CSA.

“The only thing we need to buy at this point,” Couch says, “are onions and sweet potatoes. Everything else comes to us.” The Bread for the Journey granting nonprofit gave Ceres $1,000 to buy pots, pans, knives and other kitchen necessities.

But the emotional necessities mean almost as much to Couch. “The food needs to be beautiful, delicious and nourishing,” she says, remembering a story from a client who had lain in bed one night running down her day’s diet and wondering if she had eaten enough vegetables for good health. She went down to the fridge, opened the Ceres containers there, and took a forkful of each. The next day she told Couch, “Every bite sang an aria in my mouth.” That’s not a compliment easily forgotten.

“We’re also here to empower young people about healthy bodies, healthy foods and leadership,” Couch continues, speaking quickly in the cold afternoon air. “I also want them to see how simple it is to contribute. You can be 14 and still give something.

“Thirdly,” she asks rhetorically, “how can we make a maximum impact that’s creative and led in a way that’s truly sustainable?”

Couch would eventually like to form a teen speaking bureau. She envisions a two-acre land plot for growing, a teaching kitchen and Ceres Projects in other areas. There’s already a burgeoning model coming up in Marin. Its needs and aims will be slightly different than the Sonoma County nonprofit, but that’s OK with Couch, as long as they focus on the big three.

Eager to return to the party and the warmth inside, Couch stops her rapid-fire delivery for a moment and pauses. “It’s been astonishing to me,” she says, “to bring this into existence. It’s required so little other than the willingness to say yes.”