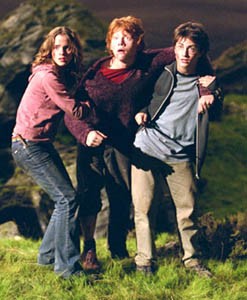 ‘Harry Potter and the Prisoner of Azkaban’

Teen Trio: Are wizarding powers merely a metaphor for the inner Hercules? Who the heck knows.

Educator Mavis Jukes on the strength of self

“I didn’t really have any idea I’d respond to the film this way,” says author Mavis Jukes, wiping away a flood of tears as the end credits roll on the unexpectedly moving–and surprisingly satisfying–Harry Potter and the Prisoner of Azkaban, based on the book by J. K. Rowling, which Jukes has never read.

“But,” she says, somewhat recovering her composure, “I will thank this writer and the people who made this film for the rest of my life, because for once someone has portrayed teenage kids with respect and appreciation, showing the power they can have to act with courage and integrity. Just for that reason alone, I’d love for every kid in the eighth and ninth grade to see this movie. It’s very powerful.”

No kidding. For the record, Jukes isn’t the only one who’s all choked up. Blame the final 30 minutes of Azkaban (imagine an especially sly, above-average Hallmark card, but with magic and mayhem and mystical flying beasts), and the well-crafted cinematic moment when Harry discovers that he’s a much more powerful wizard than he’d ever believed himself to be. It is a sequence of events that, according to Jukes, actually made her skin crawl.

The author of numerous award-winning fiction books for children (Blackberries in the Dark, Like Jake and Me, Expecting the Unexpected, No One Is Going to Nashville, Cinderella 2000), Jukes has also created a bestselling series of influential and very funny health guides for teens and preteens, including It’s a Girl Thing: How to Stay Healthy, Safe and In Charge; The Guy Book: An Owner’s Manual; and Be Healthy! It’s a Girl Thing: Food, Fitness and Feeling Great. She ostensibly knows what makes kids tick and what gets under their skin, but she was unprepared for the way this new Harry Potter film got under her own skin.

“It was amazing and weird, that sensation I had at that precise moment in the film,” she says. “It was like the hair standing up all over, my skin got all prickly, it was like my skin actually crawled. I guess that really happens to people, but I’ve only read about it. So there’s another surprise–my first official skin-crawling moment happens at age 56, in a Harry Potter movie, when Harry figures out that the power he thought was centered in another is actually coming from himself.”

The whole “discovering the power within” thing is a theme that’s been explored in stories since the beginning of time. But the way it plays out in Prisoner of Azkaban is very effective.

“For kids,” Jukes points out, “this can be a pretty astounding revelation. I think Harry’s magical powers are a metaphor for his inner strengths. Kids don’t know how much power they can have, or how to use their strengths. I think the reason you and I reacted so emotionally to that scene is because it reminds us of what it was like to discover our own inner power–that whatever-it-is, that whatever-it-takes–that comes from inside us, that makes it possible to do what we sometimes doubted we could accomplish.”

“But what exactly is that ‘power’ that we’re talking about?” I ask. “Assuming Harry’s magic is a metaphor, what’s it a metaphor for?”

“The ‘power’ makes it possible for him repel the most negative, scary, terrifying, threatening imaginings–of course, in the movie they’re not imaginings, they’re real,” Jukes muses. “So I guess the power is . . . the power is . . . What is that power? It’s probably something corny like ‘thinking positively’ or ‘believing in yourself.’ People sing sentimental songs about it–you know, ‘The hero lies in you,’ that kind of thing. But on a personal level, there are no words attached to it, no words that describe it. Inner power is inner power.

“And when you have it, when you’ve experienced it,” she says with the smile of experience, “it really almost is like magic, isn’t it?”