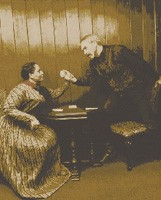 Opera is a fundamentally silly art form, and its silliness is its essential strength–though many of its fans take opera much too seriously to agree. Like Japanese animé, another fundamentally silly yet dependably entertaining medium, those elements that first-timers might see as weaknesses are, in fact, the medium’s primary appeal. In both art forms, people tend to express themselves differently than in real life; artificiality replaces realism from the first note sung or the first line delivered; the plots are always far less important than the poignancy and colorfulness of the characters; and every single emotion is played way over the top.

In spite of these excesses and eccentricities–or, more likely, because of them–both animé and opera are able to reach in and move us, take control of our brains and hearts, and spin them like tops in ways that are profoundly satisfying. Someday, enterprising folks will realize this and we will see splashy animé versions of Madame Butterfly, Carmen, Don Giovanni and the Ring cycle. Until then, we who appreciate both opera and animé must experience our art forms separately, one at a time.

Puccini’s Girl of the Golden West–currently playing at the Cinnabar Theater–is not as well-known as many of Puccini’s other masterworks and is not among his most lyrically memorable creations, musically speaking. But it has an inherent charm that keeps it from disappearing from the opera repertoire, and, much like the notion of an animé version of The Flying Dutchman or Die Fledermaus, the very idea of an Italian opera set in the Wild West is enough to induce curiosity.

Since its inception, Cinnabar has been committed to making opera accessible to new audiences–largely by presenting them in English–and this production, directed by Elly Lichenstein with musical direction by Nina Shuman, is a fine example, for which Shuman has contributed a new English translation. It’s a crowd-pleasing trifle packed with barroom brawls, high-stakes poker, angry lynch mobs and a dash of frontier bad language. There is no way to describe the perverse delight of hearing an operatic baritone singing the phrase, “You son of a bitch!” It’s not exactly Deadwood, but it’s kind of a kick, and the opening-night audience reacted to each random instance of cowboy-opera profanity with appreciative laughter and applause.

The opera, which first appeared in 1910, was based on a play by David Belasco, the American author who also wrote the play on which Puccini’s Madame Butterfly was based. The story is reasonably predictable, and unlike some operas, it is pleasingly uncomplicated. In a mining camp in the California Sierras, rifle-toting Minnie (impressively portrayed by San Francisco-based soprano Kathleen Sisco) is one of the town’s few females, so her barroom is the most popular drinking and gambling establishment for miles around. All the men have proposed marriage, none more forcefully than the local sheriff, the dark and dangerous, occasionally violent Jack Rance (a believably grounded William Neely, who looks like Burt Reynolds and sings with a soothing baritone that could lull a bear to sleep).

Insisting that she will only marry for love, Minnie manages to keep her suitors and customers in balance until the unexpected arrival of legendary bandit Ramerrez, disguised as a dashing Marlboro-man-type known only as Dick Johnson from Sacramento, a fine fit for tenor John Davey Hatcher. Minnie falls for him instantly, and as the hard-bitten salty Wells Fargo agent Ashby (Sonoma’s John Bonnoitt) rallies the miners to join his Ramerrez-hunting posse, Rance becomes increasingly jealous of Dick Johnson from Sacramento.

Working with an impressive set by John Connole (especially splendid in the first act barroom scene), director Lichenstein has created a believably seedy world for her ensemble, who look the part down to the last dirty jacket and grizzled beard. With one of the best blends of voices and actors in recent Cinnabar memory, Girl of the Golden West–silliness and all–is worth gambling on, even if you’ve never seen an opera before.

After all, who knows how long you’ll have to wait for the animé version.

Of Pirates and Elves