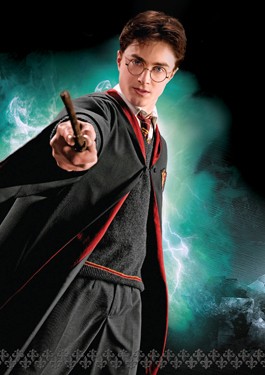 It's the end of an era—and still, 14 years on, the 'Harry Potter' series defines coming-of-age for an entire generation

Every generation has its defining moments. In the same way folks of a certain age remember exactly where they were when J.F.K. was shot or when they watched Princess Diana walk down the aisle, I remember where I was at 10 minutes to 8am on July 21, 2007: the parking lot of a Target, off I-5, somewhere in the Central Valley.

Harry Potter and the Deathly Hallows, the last book in the Harry Potter series, came out the summer after my sophomore year of college. I had an older boyfriend, and that weekend we were meeting a group of his friends in Lake Tahoe to celebrate his birthday. I spotted the bullseye from the freeway and insisted that, no, I was not joking, we had to pull off right now. When we drove up, there was already a handful of bleary-eyed, pajama-panted individuals queued up, presumably because they couldn’t wait until their pre-ordered copies arrived in the mail to start the final chapter of a saga that, if they were like me, had spanned exactly half their lives.

People who have never known the magic of J. K. Rowling’s world, like my boyfriend behind the wheel that morning, sometimes have a hard time understanding the devotion the books have inspired in longtime fans. To truly understand what it meant to grow up with Harry Potter, you have to start at the beginning.

I was 10 years old in 1997. I liked Hanson, the Spice Girls and the movie Titanic. Ten going on 11 was the same age, incidentally, of the boy wizard protagonist of a new book, Harry Potter and the Philosopher’s Stone, released that year in Britain. It didn’t come out in the States until a year later, and it was still another year before the book battled its way past MTV’s Total Request Live, Tamagotchis, Britney Spears and Blink-182 and into my pre-teen consciousness.

I don’t remember the first time I heard about Harry Potter, but I’m sure my response was to roll my eyes and say something along the lines of, “There is no such thing as magic. Sheesh! Call me when the mail comes. My copy of Seventeen should be here today and Topanga from Boy Meets World is on the cover this month.”

Like just about every other middle schooler in the history of middle school, I spent the majority of those three years wanting, and waiting impatiently, to be older and cooler than I was, mining the pages of teen magazines for clues (“Get Glam Hair and Makeup!” “Quiz: Is He Crushing Back?”) on how to reach that pinnacle of sophistication. I initially dismissed Harry Potter out-of-hand because of the childish cover, a goofy pastel cartoon of a dorky kid with thick glasses falling off of a broomstick. I wasn’t totally sure what cool was, but I knew that guy wasn’t it.

Bowing to parental prodding, though, I eventually picked up the book. The first thing I learned was that on Harry’s 11th birthday, he is informed that he’s a wizard and whisked from the cupboard under the stairs to Hogwarts School of Witchcraft and Wizardry. Eleven years old is the upper limit for magic—by that age, there’s no more Santa Claus, no Easter Bunny, superheroes are fiction and magicians are merely masters of deceit. For people my age, Rowling’s book came along at precisely the right time, reintroducing us to imagination at the exact moment that magic was being drained from our world. Instead of telling us to spurn make-believe, Rowling showed us its utility, creating a world that was expansive, crafted with rich detail and populated with characters we related to. We were allowed to immerse ourselves in it, and we did.

Once I started, I devoured books one, two and three in almost immediate succession. When the fourth book came out, the summer before I entered high school, I attended the first of what would turn out to be several midnight release parties over the years.

Sept. 11, 2001, fell on the second Tuesday of my freshman year, and the sheer impact of the day seemed to shatter whatever concept I had of how things were or would ever be. When the next book, Harry Potter and the Order of the Phoenix, came out in 2003, it reflected the changed world: more violent, more sinister and more reflective of the unimaginable. The hero Sirius was dead, Voldemort was alive (and activating a cell system of Death Eaters), and the wise Dumbledore’s power was faltering.

Like us, Harry had changed, too. He was moody, brooding, angsty. He fought with his cousin and his best friends, struggled to understand romantic relationships, drank butterbeer and lashed out at the adults in his life. At Hogwarts, they were taking OWLs or NEWTs, while I had SATs, APs and an extracurricular agenda to rival Hermione’s.

There was one club that I left off college applications, though. Formed my junior year by a handful of students, it was called “the DA” after the secret club that Harry and his classmates form at Hogwarts. In the books, the students in Dumbledore’s Army meet in secret to teach each other things that the school (under the iron fist of interim Headmistress Umbridge) refuses to.

There was nothing subversive about our group—we met, albeit secretly, to talk about the books, parse their subtexts, quiz each other on trivia, make predictions and drink tea. There was something, though, about getting together to obsess over a children’s book series instead of drinking, experimenting with drugs and sneaking out of the house (or in addition to that stuff) that felt like an act of rebellion. We were subverting a cultural dialogue that dictated who we were supposed to be, or at least who we were supposed to want to be.

After graduation, the DA disbanded. (No one, including three members who remain close friends to this day, responded to my message for this piece. We are that serious about secrecy. Or something.) I think, over time, the excitement that the books sparked in us when we were young melted away, but it left an enduring loyalty to the characters with whom we’d gone through so much. The summer the sixth book came out, I had graduated from high school and was working as a summer camp counselor. I still read the book in one sitting, but only because I was afraid that major spoilers would slip if I didn’t finish it before my 10-year-old campers did.

Yet the old loyalty drew us back one last time. For me, and a handful of other stragglers, there was that Target on the side of I-5. We were there when it opened, pulling copies from the towering display of books, shuffling single-file to the lone open checkout stand and cracking the binding while we drove away—in my case, toward a weekend of debauchery in Lake Tahoe.

Or that was the plan, anyway. Once I started reading, I might as well have been 12 years old again, under the blankets with a flashlight, for the embarrassing amount of time I spent tucked away in the cab of the truck with my headlamp on, turning page after page of the final book while my boyfriend and his friends, all college graduates, played drinking games around a campfire.

As you might imagine, dear reader, that relationship only lasted so long after it became clear that finishing the final Harry Potter book took precedence over the birthday festivities, and, yes, I still feel a pang of guilt thinking back on it. When all’s said and done, though, this other relationship of mine had spanned 4,100 pages, 1,179 minutes of film, countless hours spent reading, rereading, parsing and debating the respective merits of the books and movies—14 entire years of my life—and if a person can’t understand that, well, I knew a few other people who could.

Even among the most loyal readers, there is one literary choice Rowling made that is more contentious than any other: the decision to include an epilogue to the final book. That chapter, “Nineteen Years Later,” depicts Harry, Ron, Hermione, Ginny, Neville and Draco as adults, now married and sending their own children off to Hogwarts. For some readers, it would have been enough to see Harry vanquish Voldemort and imagine how the rest of his life played out (if nothing else, Rowling had taught us how to do that much). We understand why she did it, but it doesn’t make us any less uncomfortable reading it.

It is a reminder that sooner or later, we’re going to have to grow up too—and we don’t want to know how it all ends quite yet.