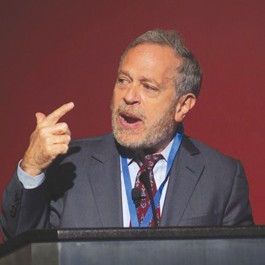 A child of the ’60s, I find it hard to embrace terms like “American dream,” even when a brilliant guy like Van Jones invites me to join the American Dream Movement. I’ve emotionally segregated the words “America” and “dream” since the Rev. Martin Luther King Jr. was killed for speaking out on behalf of blacks and organized workers. King had a dream for America: social justice.

As you read this, I am in socialist Sweden with my 10-year-old son, who will be seeing the world outside the United States for the first time. Over here, it’s clean, people have enough to eat, it’s legal to hike on anyone’s land, and it’s safe to drink from the streams. Shared equally, taxes are high and provide a high level of prosperity and education. Most Swedes own a summer home where they spend all of July.

When I was my son’s age, I was mesmerized by the first lunar landing. But it could not eclipse the horrors of the previous summer when Robert Kennedy was assassinated, just months after Dr. King. This was how I understood my country then: we landed white men (women and minorities excluded) on the moon; we drafted men (women excluded, male minorities included) to fight in a senseless war; and outspoken advocates of justice got murdered.

Yet back then, my country was making social investments like those still made by Swedes. According to former labor secretary Robert Reich, “America used to invest a big portion of [its] economy in the future prosperity of all Americans”—meaning schools, public health, highways, public transportation, parks and research. According to Reich, in a video endorsing the American Dream Movement, we are still living off those investments. But not for much longer.

That’s why, on July 16 and 17, the American Dream Movement is sponsoring house meetings—gatherings of friends and neighbors in people’s homes to build a grassroots effort toward reclaiming the idea of an American dream.”The only thing we have in America that’s unique to America,” says Reich, “is our people—our brains, our health, our public research and our infrastructure. If we don’t invest in these, we threaten our prosperity and that of our kids’ and our grandkids’.”

Organizing sponsor MoveOn claims we can create a people-centered fix for the economy, “an all-new contract for the American dream.” The present contract exploits the poor to enrich the wealthy—pure social injustice. So to attend an American dream house meeting this weekend is to stand up, as Dr. King did. In these times, social justice means economic justice, and for that we must join our fellow Americans and together create a fair economic plan.

At press time, there are 17 different house meetings in the North Bay. Find one near you at www.moveon.org.