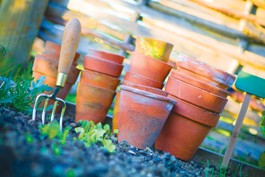 I‘ve got most of my garden planted now: three kinds of lettuce, arugula, five kinds of tomatoes, two kinds of cucumbers, a bunch of herbs, broccoli, spinach, carrots, onions, cardoons, artichokes, Brussels sprouts, corn, eggplant and chile peppers. (I was supposed to wait until May 1 to plant the tomatoes, but I’m impatient.)

As I surveyed the sprouts and anticipated my backyard bounty, I came to two realizations. First, 200 square feet isn’t nearly enough space to put a dent in my family’s fresh produce needs. During the hours I spent double-digging my beds, I thought I could go into business as a farmer with the surplus, but given our appetite, we’ll still need to go to the store for more. Even if I dedicated half my beds to onions we would need more.

Next, confining a garden to the backyard is all wrong. If I expanded to the front yard, it would obviously give me more planting space, but I think it could have a more powerful effect. It just might inspire my neighbors to peel up their lawns and plant vegetables gardens of their own and thereby create a kind of decentralized community garden. Let me explain.

In my wildest fresh-produce fantasies, like-minded residents on my street would gaze upon my front yard garden and decide to pick up a hoe themselves. Each one would specialize in a few crops as part of a coordinated effort to raise the food we wanted. And we might even get to know each other a bit better as we met to divvy up vegetables and discuss snail combat techniques and the virtues of worm casings as a fertilizer.

In a small way, I feel like my backyard labors have already sparked an interest in community gardening. A month or so ago, I rented a sod cutter to peel up the ugly mat of tangled weeds and grass where I wanted to plant my garden. If you’ve never seen a sod cutter, it’s an ingenious but loud machine that uses two blades that wiggle parallel to the ground to rip up the turf. After rolling over the grass with the blades going, you simply roll up the grass. It’s like laying down sod in reverse.

Anyway, my neighbor was curious about what I was doing with the contraption and watched it in action. Inspired, he asked if he could borrow it to rip out a section a grass in his front yard that had been overtaken by crab grass. He was planning to reseed it with grass, but interested neighbors kept asking what he was going to do with the bare ground. A garden? A fruit tree? Flowers?

He bowed to the neighborhood’s interest in something other than another lawn and decided to plant a peach tree. He first consulted with neighbors about what kind of fruit trees they grew so he wouldn’t duplicate their efforts. Now our little stretch of the block has apples, peaches, pears, cherries, lemons and oranges. I’ve pledged to share some of my apples in exchange for some of his peaches, and I’m sure other neighbors will join in, too. While my summer garden is set for this year, I’m already planning to expand into the front yard for a winter garden, and I hope to build on the patchwork community garden we’ve started with the fruit trees. Each of us can only grow so much on our own, but if we combine the yield of several gardens it would go a long way toward giving all of us more of the fresh produce we need. How cool would that be?