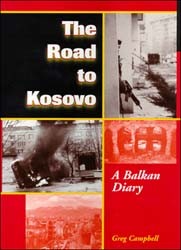 HORROR HUGS the rugged terrain of the Balkans like a grotesque second skin. Many Americans can’t find Kosovo or Bosnia on a map, but most of us know, or think we know, at least the bloody outlines of the decade-long nightmare that has engulfed the former Yugoslavia, the rape and murder and mass graves that have rolled over the region in a tidal wave of evil.

But that sparse knowledge may no longer be enough. As NATO bombs fall by the thousands on Serbia, as the province of Kosovo is emptied of ethnic Albanians, as our politicians debate sending in ground troops, the whole situation threatens to jump off the television screen and into the real lives of ordinary Americans.

There is, of course, no shortage of people offering to explain the whole tangled web to us. Commentary on the Balkans has become a growth industry. Unfortunately, much of what’s offered sheds more heat than light on the complicated situation. And that brings us to the latest entry in the field, Greg Campbell’s The Road to Kosovo: A Balkan Diary (Westview Press; $25).

This flawed but interesting book is the product of the author’s courageous decision in the summer of 1998 to drive a Budget rental car across the war-torn landscape of Croatia, Bosnia, Montenegro, and Kosovo. Campbell had visited Sarajevo once before, on assignment in 1996 for an alternative newsweekly in Colorado. But this time the freelance journalist braved snipers, Serb checkpoints, and Kosovo Liberation Army guerrillas to get a close look at the uneasy peace imposed by the Dayton Accords and the new conflict building in Kosovo.

The author is at his best when he is painting vivid pictures of the scenes he encountered on his two trips. These compulsively readable passages show us the burning buildings of Sarajevo, the stark mountains of Montenegro, and the bizarre feeding frenzies of the international media. There are images of horror: fiction from Stephen King could not surpass the graphic description of the mutilated bodies of a family massacred by Serbian police. There are finely observed ironies and absurdities: a little Yugo automobile crammed full of men with rifles; a rebel fighter wearing his KLA patch sewn onto a Dallas Cowboys cap.

But this book aims to be more than a travel diary. The author also attempts a political analysis of the situation. In that, he is less successful.

Campbell sums up the key players in astoundingly simple terms: the Serbs are murderous monsters, Western nations are well-intentioned but cowardly and ineffectual, the KLA guerrillas are flawed but heroic. The holes in this analysis are obvious even to a reader who knows little about Kosovo. It’s just all too simple to really describe the complicated Balkans.

You can believe that Serb leaders are evil killers and still wonder why Campbell can’t find more ordinary Serbian people to interview. You can support the KLA and still be disturbed by the book’s harshly critical take on the non-violent Kosovo nationalist movement that preceded armed struggle in the region.

Similar flaws appear in the author’s take on U.S. actions. The book, which went to press before the bombing began, criticizes the Clinton administration for failing to intervene with more force in the region. But the author never confronts arguments that NATO’s real interest in Kosovo has little to do with humanitarian values.

Campbell is quite convincing when he says that ancient ethnic hatreds in the region weren’t the true problem in the Bosnian conflict. The real catalyst for horror was the ruthless ambition of politicians, who whipped up ultra-nationalist feeling to buttress their own power. But before you know it, the author is arguing that ancient history can explain the situation in Kosovo.

Then, suddenly, Campbell cuts it all off with a conclusion so abrupt that it borders on the bizarre. His trip ends, his analysis dribbles out a few final clichés, and he goes home.

But maybe the abrupt ending is actually oddly appropriate for a book on this subject. Everybody, it seems, wants to offer easy answers: intervene, don’t intervene, put a bag over our heads and forget the whole thing. But give writers a few hundred pages to mull the situation over, and they seem to realize that things are more tangled than they first thought. When it comes to the Balkans, simple answers may be as hard to find as peace itself.