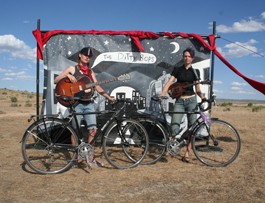 Music loving and the carbon footprint

We have green clothing, green restaurants, green investments—why not green music? Musicians are generally an earth-lovin’ lot, as are many of their fans. But music is a business, and no business is 100 percent environmentally benign.

The bad news for record lovers is that vinyl is diabolically full of toxins. The good news is that the volume of newly released vinyl records is a mere drop in the bucket compared to how much PVC we encounter through construction, apparel, food packaging and toys. Of course, you could buy only used records—there are only a million billion out there—or bite the bullet and score some yummy newly pressed vinyl, perhaps compensating for your purchases by swearing off bondage gear or vinyl siding for life.

Compact discs are smaller, but still material-intensive, mainly polycarbonate and aluminum. In life, there are two kinds of CDs: the ones we want, and the ones we don’t. Sure, we’re encouraged to donate or reuse CDs. The reason people get rid of CDs is because they suck and no one in her right mind has any use for them outside of scattered ill-conceived art installations. It’s possible to recycle unwanted CDs, but very few facilities accept them; so, for most of us, into the landfill they go.

Digital music, as unromantic as it may be, boasts a teeny footprint. There are no transportation costs, and we utilize computers, which we already use for every other damn aspect of our lives, to perform this task. So even though that little mp3 player may be loaded with heavy metals, it’s small and built to last, or at least until the newest gadget technology makes it obsolete.

The problem that eco-savvy performers face is less about recording media than road miles. Touring the country in a marginally roadworthy van is an indie-musician rite of passage, but these days it takes a lot more CD and T-shirt sales (inorganic cotton sewn in a foreign sweatshop, natch) to fill a tank up with fossil fuel.

The progressive bluegrass band Hot Buttered Rum converted their diesel engine to run on vegetable oil, a transportation method with the added benefit of requiring frequent detours to greasy restaurant dumpsters; their current tour is fueled by biodiesel. In the summer of 2006, the female duo the Ditty Bops rode their bikes 4,700 miles to gigs across the country. They had a support vehicle in tow, but they also had the PR machine of a major label and their bike tour scored plenty of goodwill and press.

However, the touring method of a band—while it might be both novel and environmentally friendly—is ultimately not going to determine whether or not an audience will come. Anyway, it turns out that it’s the thousands of fans driving to a stadium concert that leave a bigger carbon footprint than Miley Cyrus’ multitrailer caravan of Hannah Montana props and lighting. Hmm. Better carpool.

Stripped of all else, music is sound, and it’s silly to think of something as ephemeral and purely organic as sound as having a carbon footprint. Will CD inserts printed on recycled paper, eco-pavilions at the Warped tour and Bonnie Raitt’s carbon-offset surcharge for front-row seats make any difference to speak of, or is it all just well-intentioned hot air? Musicians can sing until their faces turn blue, but someone’s got to listen to them for it to make any difference.

Maybe the best way to have a diminutive music-carbon footprint is to not sweat the small stuff and instead focus on the larger picture. What’s more important, the 500 cassette tapes I just took to the Goodwill, or getting people to vote for candidates who support positive changes in energy policy? Maybe buying a new record or two isn’t such a bad thing after all.