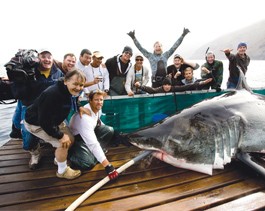 A controversial plan to hook, boat and tag sharks heads out this week

HOOKED: Dr. Michael Domeier (arms raised, center) and his team boat a great white shark near the Guadalupe Islands in this undated photo. The animal, a female, was tagged and released.

Fishing for great white sharks in California waters ended 15 years ago when legislation gave the fish full protection from pursuit, harassment and harm. This week, however, a Southern California marine research group is putting baited shark hooks in the waters near the Farallon Islands, spurring concern from others in the research and ecotourism communities that the procedure—which involves bringing the big fish aboard a vessel—could cause injury or death to the protected animals.

The Marine Conservation Science Institute from San Diego County, headed by veteran shark researcher Dr. Michael Domeier, submitted a permit application early this year to the California Department of Fish and Game and to the National Oceanic and Atmospheric Administration (NOAA) seeking permission to catch, boat, tag and release as many as 10 great white sharks within the boundaries of the Gulf of the Farallones National Marine Sanctuary while a film crew documents the project. The state and federal permits were both granted, and, weather permitting, Domeier will be fishing between Monday and Friday of this week, according to Maria Brown, superintendent of the sanctuary.

Brown says that multiple marine biologists were consulted to determine whether allowing the sharks to be hooked, boated and tagged—a procedure that Domeier has conducted on 11 white sharks at the Guadalupe Islands off the Baja California coast—could threaten the safety of the fish.

“Everyone we consulted has been very positive about Domeier’s research,” Brown states.

But Dr. Pete Klimley says he was among those consulted and that he firmly warned NOAA officials against granting the permit. Klimley, a professor of marine sciences at UC Davis, has conducted tagging projects on sharks for 25 years using hand-held lances to set the tags.

“I voiced serious concern about this issue when they came to me. You’re taking an animal that’s two tons and which needs the water to support its weight, and suddenly removing it from its environment.”

Klimley speculates that internal organs could rupture, causing death days later, and that unborn pups inside a pregnant female could be squashed.

Intentional capture of white sharks in California became illegal in 1994, and new regulations passed in March grant them additional protection in the Gulf of the Farallones National Marine Sanctuary. One of the new laws prohibits observers from approaching to within 50 meters of a white shark. Mick Menigoz, who has hosted shark-viewing trips to the Farallones for five years on his boat Superfish, says that he advocated for the tightening of protective measures for white sharks.

“We pushed for the new regulations, and we’ve bent over backwards for years to not hurt or bother the sharks,” Menigoz says. “We’re not even allowed to approach them, and now they’re letting these guys come in and use baited hooks to catch them. I’d be surprised if they don’t kill one.”

Domeier, who returned no phone calls or emails from the Bohemian, aims to fit captured sharks with advanced SPOT (smart position or temperature transmitting) devices. To install these, which communicate with satellites only when the sharks break the surface, researchers must drill a small hole in a shark’s dorsal fin and bolt the tag in place. The operation requires hauling the animal onboard for as long as 20 minutes. Cameras, which sources say will be filming for National Geographic, will be rolling.

Brown of the NOAA says that SPOT tags last longer than many existing transmitter types and, fitted to the dorsal fins of white sharks, could help to solve the unknowns about their migration patterns, such as whether the fish return to the Farallones on a strict annual or a biannual schedule.

But Dr. Ken Goldman, now with the Alaska Department of Fish and Game but who tagged and studied white sharks in California extensively in the 1990s, wonders how significantly Domeier’s SPOT tag project will contribute to the existing pool of knowledge of great white behavior, and he wonders if it’s worth the risk. Goldman has seen large great whites die of stress-related causes days after capture and release by sport fishermen.

“With great whites, it’ll take a long time to pull them in and handle them, and there’ll be a major stress factor on the fish,” Goldman says. “I’m concerned that the sharks will be stressed, lose their capacity to maintain their core body temperature and die.”

Superfish skipper Menigoz sits on the Gulf of the Farallones National Marine Sanctuary’s advisory council along with 12 other individuals. The council’s job, according to the sanctuary’s website, is to provide “the Sanctuary manager with advice on the management of the Sanctuary.” But Menigoz says he was never consulted for his opinion on Domeier’s SPOT tagging project.

“I’m very surprised I wasn’t contacted. At least a courtesy notice would have been nice, but it’s been top secret. Now everyone’s saying, ‘How can this be happening in a sanctuary?’ Well, believe it—it’s happening.”