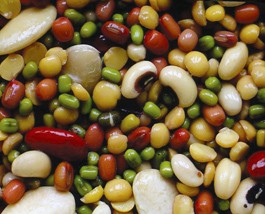 One of nature’s perfect foods, the bean rarely gets its due. Reviled even in a rhyming run that agrees that they’re good for your heart, beans lack the glamorous cachet of other produce and, indeed, of other dried foods.But KSRO talk-show host Steve Garner and his pal, chef John Ash, aim to change all that by making the lowly legume the object of their 23rd annual Good Food Hour recipe contest.

Original, you-made-it-up-yourself bean-based recipes must be received at the station no later than 5pm on Wednesday, Nov. 4. Post to PO Box 2158, Santa Rosa CA 95405; fax 707.571.1097; or email [email protected] for a chance to be one of four contestants who will gather at G&G Market on Saturday, Nov. 7, to cook their best bean in a taste-off with judges, including Rancho Gordo’s own Steve Sando, a man who’s truly bean around. Prizes include free wine, cooking classes, gift certificates and other booty. For more, go to www.ksro.com.