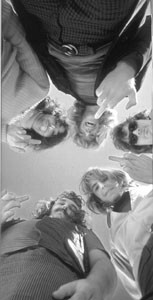 Dead in a Box

Grateful Dead archivist David Lemieux has called it “the Rolls Royce of vaults.” And there’s no denying that the band’s virtually impregnable San Rafael storehouse–13,000 audio tapes and 3,000 videotapes protected by five-layer thick walls, numerous security alarms, and a state-of-the-art fire-suppression system that releases Inergen, a gas that replaces all the available oxygen in the room–is as impressive as all the other endeavors taken on by the Dead during their long, strange trip.

Suffice to say that this set features rarities that have dazzled even the most committed bootleg collector. That’s quite an accomplishment for a band that actively encouraged tape trading and authorized the release over the years of 22 multidisc volumes of live material–the ambitious Dick’s Picks series–compiled by the late tape archivist Dick Latvala of Petaluma.

The dozen discs run the gamut, from the blues-based tunes on 1967’s self-titled debut to the wild experimentation of 1969’s Aoxomoxoa, from the reflective country-inflected songs of Workingman’s Dead and American Beauty (both released in 1970 and listed by late guitarist Jerry Garcia as his favorite Dead albums) to the acid-laced jams of Europe ’72.

The radio-friendly lengths of 1966’s “Can’t Come Down” and Gordon Lightfoot’s “Early Morning Rain” (included on the set’s first disc, which showcases pre-Dead bands the Warlocks and the Emergency Crew) may be an eye opener for casual fans familiar with the most popular cult band in rock history’s reputation for extended improvisations.

Diehard Deadheads can satisfy their seemingly endless appetite for rarities with alternate studio takes of such classics as “New Speedway Boogie,” an obscure and until recently completely unknown 35-minute jam from the Aoxomoxoa sessions, and a rare rendition of “Fire in the City” with jazz singer Jon Hendricks.

With input from longtime Dead publicist Dennis McNally (who is preparing a much-anticipated biography of the band) and Lou Tambakos (together they co-conceived and compiled the introductory “Birth of the Dead” disc), and produced for release by Rhino’s Grammy-winning executive James Austin and tape archivist Lemieux, the hefty box set is a lavish affair. Each disc features fully restored artwork and its own 16-page booklet with brand-new essays by such noted Deadologists as McNally, David Gans, Blair Jackson, Gary Lambert, Lenny Kaye, Hale Milgrim, Paul Nichols, Steve Silberman, and Owsley “Bear” Stanley (the North Bay resident best known as the onetime underground chemist responsible for the psychedelic era’s best LSD).

The box set also includes an 80-page booklet chronicling the band’s history, dozens of rare photos, reproductions of vintage rock posters and other memorabilia, promotional campaigns (one flyer recruits candidates for a Pig Pen look-a-like contest inspired by the band’s late keyboardist), and a detailed discography.

“The fact that this band played at the pyramids in Egypt testifies to their adventurous spirit, not to mention a feat of global and spiritual diplomacy. . . ,” producer James Austin writes in the liner notes. “There were many such high points on the Dead trail. For myself and millions of fans, we seemed to be living for the next concert. Our grades may have suffered, we worked fewer part-time hours, got high, and heard the most amazing music on the planet.

“It was a colorful, electric, mind-altering world. . . . It was a blessing and a curse.”

The box set will set you back 150 bucks. But if you’re a rock & roll fan, you’ll consider that a cheap ticket on this long, strange trip.