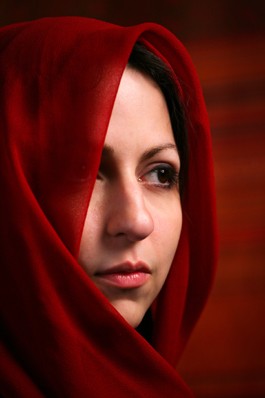 Life in war-torn Iraq is obviously no picnic, but it starts to look a little bit better when compared to conditions under Saddam Hussein (unless you were one of the select few who received his double-edged favors, of course). In Heather Raffo’s poetic, gracefully humane one-woman play The Nine Parts of Desire, running through June 14 in the Studio at Santa Rosa’s Sixth Street Playhouse, nine Iraqi women tell intimate stories of their lives before and after the fall of Saddam. Some of these stories are lovely and inspiring, some are funny, many are harrowing. All of them are performed by Denise Elia, taking another major step forward after several years working in the community theater trenches of smallish character parts and ensemble roles.

In Nine Parts of Desire, Elia, always a very physical actor, morphs in and out of the bodies of a distinct array of women: a grieving Bedouin woman dropping the shoes of dead people into the Euphrates every day as an act of devotion; a wealthy Iraqi artist wrestling with the compromises that have brought her success under Saddam; a neglected wife and mother, yearning for love, who discovers her own worth while posing for the aforementioned artist; an expatriate Iraqi, living in New York, anxious for news of her family as the post 9-11 bombing of Iraq begins; a fearful ob-gyn in Baghdad describing the horrific health conditions of her people after the commencement of the war and invasion; and others, all richly detailed, distinctly individual portrayals, thanks to Elia and co-directors Bronwen Shears and Elizabeth Craven.

The set is clever patchwork, suggesting different times and places with a television set here, a pile of rubble there, an easel, a chair, an array of glass water urns, a pool of water. Elia navigates from one character to another using slight costume changes, shifts in voice, changes in posture. This is a beautiful show, and an important one, taking us into the lives of “others” in ways that are both mesmerizing and deeply moving. Nine Partsis the type of show that was designed to challenge, change and inspire the people who see it, and in the hands of Shears, Craven and Elia, that’s exactly what this play does.