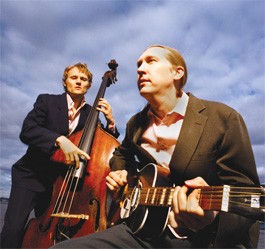 There is a great tradition of brothers’ bands going back to the Louvins, the Carter family, Phil and Don Everly and the Beach Boys, on up to the present day with bands like Oasis, Kings of Leon and the Black Crowes. Joining this tradition is the Wood Brothers. Oliver and Chris Wood grew up in Colorado listening to their father’s Cambridge – Hootenanny-era folk music.

“My brother got an electric bass for Christmas when he was a kid,” Chris Wood says via phone from his home in upstate New York. “He moved on to guitar and showed me some lines on the bass. We actually did some playing before he left the house.” But then Oliver headed west for college, eventually ending up in Atlanta. For Chris, the East Coast beckoned, first for school in Boston and then to New York, where he cofounded the influential jazz-based band Medeski, Martin and Wood.

“It was just so organic,” Wood explains, talking about reconnecting with his brother long after their respective musical careers had flourished. “It had been 15 to 20 years, and I don’t know what happened. We got to the point that we could look up from what we were doing and realize that we had the same job, we get along, we respect each other’s playing a lot. It just seemed like time to collaborate.

“It really is the best of both worlds,” he continues. “I still pinch myself to think I’m in a band with my brother.”So, if he had to choose—Everly Brothers or Beach Boys? “I guess Everly Brothers,” Wood picks, “the Beach Boys just seems more dysfunctional. But I’m sure Phil and Don had their days.”