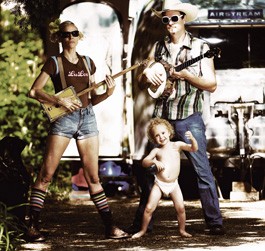 FIELD TRIP: Lucy Tight, Wayne Waxing, their three-year-old girl and a 1961 Airstream make up Hymn for Her.

Many albums rely on songwriting style, production approach or the personalities of the musicians for a unique sound or character. But for Lucy Tight and Wayne Waxing, who make up the duo Hymn for Her, some more tangible elements come into play—namely, a chain saw, a cigar-box guitar and a 1961 Airstream trailer.

Those three elements figured strongly into the making of Lucy & Wayne and the Amairican Stream, the second album from the duo. While on tour in Memphis, Tight and Waxing’s former band was helping a friend clear some fallen limbs from a storm that had hit the area. A chain saw bucked and hit one of the musicians in the head, sending him to the hospital.

Grateful for the work and sorry for the accident, the friend gave the group a unique thank-you gift—a combination guitar and bass he’d made using a cigar box for its body and a broomstick for its neck.

For a good while, the cigar box guitar sat idle in a closet.

“There were a lot of mixed feelings about the cigar-box guitar,” Tight says in a phone interview. “Every time we’d pull it out, it kind of reminded us about the chain-saw accident, so it kept on going back in the closet. Then finally, for some reason, Wayne and I just took it with us and we said, ‘You know what, we’ll play this thing one day when we have some time to learn it.'”

The duo recorded a 2008 debut CD, Year of the Golden Pig, which showcased the stripped-back acoustic sound. Then one day Tight decided to pull out the cigar-box guitar and see what the instrument could do. The two were immediately excited by the tone that emanated from the odd and seemingly primitive instrument, and decided to make the cigar-box guitar the centerpiece of Lucy & Wayne and the Amairican Stream.

Unconventional to say the least, the cigar box comes with two guitar strings and a single bass string with its own pickup—and its own set of challenges. “It really took a while to learn this thing,” Tight says, “because the neck is a broom handle, so there are no frets. I really just had to tune my ear in.”

And rather than take the cigar-box guitar into the studio, Tight and Waxing decided to record their new songs on tour, using their 16-foot 1961 Bambi Airstream trailer as a makeshift studio with their three-year-old daughter and 90-pound black Labrador by their side.

“We laughed a lot and had a good time doing this recording,” she said. “And the sound, it is what it is. But the roundness of the Airstream and the round edges make for a very unique sound, I think. It kind of bounces back and forth in a very lively way, which makes our album sound really live and rocking.”