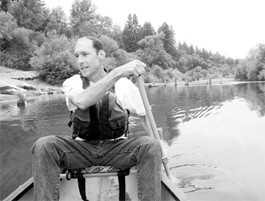 Shut off that tap, don't sprinkle that lawn: low river flows mean everyone must conserve

Photograph by Michael Amsler
Low flow and row: Don McEnhill of the Russian Riverkeepers aims to reduce his own family’s water use by nearly a hundred gallons a day.

From ankle-deep waters rippling across sparkling pebbles to deep pools moving slowly through tree-lined curves, the Russian River carries life-giving H²0 through the inland regions and into the ocean in an age-old cycle of renewal. It’s a force of nature, providing a cool summer refuge for everything from fingerling fish to frolicking folks.

In a year with record-low winter rainfall and dramatic cuts in the amount of water diverted to the Russian River from the Eel River, it’s also the focus of bureaucratic meetings and local concern.

“It’s been an extraordinarily dry year, and the fact that the Russian River basin isn’t interconnected with the Central Valley water supply [from the Eel River] means that the Russian River may be facing at an earlier point what the rest of the state may be facing later on,” says William L. Rukeyser of the State Water Resources Control Board Division of Water Rights. “If this turns out to be the beginning of a drought instead of just an extraordinarily dry year, what’s happening on the Russian River may be a preview of what might happen in other parts of the state.”

Everyone involved agrees there will be enough water in the Russian this summer for swimming, splashing and other aquatic activities for several miles upstream from the inflatable dams that are installed every year, although there could be short stretches where boaters might have to carry their kayaks or canoes.

And there’s complete agreement that getting more residents–not just river dwellers, but folks throughout Sonoma County and parts of Marin–to stop leaving the water running while brushing their teeth or to replace moisture-greedy lawns with less thirsty plants, the better the river will be.

What isn’t so clear is exactly how much should be done to keep the waterway as full and healthy as possible while also ensuring there’s enough water flowing this fall for the annual Chinook salmon spawning run. The main bone of contention is whether conservation efforts by local water providers should be voluntary or mandatory.

The Russian is the Sonoma County Water Agency’s main source for selling water to cities and districts throughout Sonoma County and in northern Marin County. Wanting to hold back enough water in its reservoirs to have sufficient quantities to release during the fall salmon run, the district declared an official emergency and the state recently awarded temporary approval for cutting summer water flows by about a third, from the usual 126 cubic feet per second (cfs) to 85 cfs. The idea is that a combination of lower flows and voluntary water conservation will keep the Russian River attractive to all types of species this summer.

“It’s going to take the community [conserving water] to ensure that we do have the flows in the Russian River for recreation and for the fish. We’re doing what we can and we hope everyone else will join us,” says water agency spokesman Brad Sherwood. “We’re hoping that we don’t have to mandate conservation, but it may come to that. Right now we’re doing voluntary conservation of 10 percent to 15 percent.”

That’s not enough, charges Don McEnhill of the nonprofit group Russian Riverkeeper (previously known as Friends of the Russian River). Similar low-flows of 85 cfs and voluntary rationing were allowed for several weeks in 2004, he recalls, and the voluntary conservation program failed miserably.

“We’re facing the lowest water levels that we’ve seen since 1976. If we had an emergency to whatever degree back in 2004 and they had voluntary conservation and achieved zero measurable conservation, it seems like, well, you had your chance and you blew it.”

It’s unfair, McEnhill argues, to place all the burden of a low-water year on the residents and tourism-oriented businesses along the river, when the river’s water is used by folks turning on their faucets and hoses throughout the area.

“The water we’re taking out of the river that’s not there to provide habitat for fish and wildlife and for recreation is basically going to lawns,” McEnhill says. “That’s where most of the summer usage goes. To de-water the river just to keep lawns lush and green is just basically wrong.”

Matching his actions to his words, McEnhill notes that his family of four (plus frequent weekend guests) has used an average of 244 gallons daily for the last three years. For two weeks, he’s been urging his family to conserve while checking the house water meter daily; it’s consistently been below 200 gallons.

“It’s just under 20 percent, but we’re not at our potential yet. I’m looking to get closer to 150 gallons a day. If I’m barking at people to look at mandatory conservation, I’d better [be doing it myself].”

But the only folks who seem to be paying serious attention to the situation are government officials and river residents, even though almost everyone who uses municipal water in Sonoma County or northern Marin County gets it from the Russian River; most folks don’t think about that when they turn use a shower, dishwasher or sprinkler.

“We’re all working with a limited resource,” McEnhill explains. “When there’s a shortfall, it’s wrong to take all of that need for conservation out of one entity, in this case the flows.”

Steve Jackson, owner of King’s Sporting Goods in Guerneville, agrees. “If you have an emergency shutdown of the river flows, there should be mandatory conservation.”

He’s also skeptical that the water agency has any real incentive to encourage or enforce cutbacks in water usage.

“All this is to them is holding more water back so they can sell more water and build more,” he charges. “They’re not cutting back on building or development, nor is their any mandatory rationing imposed on their customers.”

In fact, the Sonoma County Board of Supervisors voted 4-1 to approve a three-year study aimed at permanently lowering the Russian River flows, which would allow the water agency to drop to 85 cfs without declaring an emergency or going through the process of getting state approval. Supervisor Mike Reilly of West County’s 5th District was the lone dissenting vote.

“For the three out of seven years since 2000 that we’ve had to seek a lower flow in the summer, we’ve been able to do that within the parameters of [the existing agreement]. From my perspective, it’s not broke,” Reilly explains.

And just cutting flows is not enough, he says. “If we’re going to seek a permanent reduction in flows, then we ought to be seeking some sort of permanent or mandatory conservation program.”

One reason for the lower water levels this year, Reilly adds, is that an agreement which most officials thought would cut diversions from the Eel River by 15 percent actually dropped the amount of water flowing into the Russian River from the Central Valley by 33 percent. That means 25,000 less acre-feet in Lake Mendocino, Reilly notes, an amount which could have eliminated this year’s need for lower flows. It’s premature, he says, to seek permanent low-flow levels before seeing what happens with the Eel River diversions.

Jackson adds that the idea of permanent low-flow requirements is extremely unpopular with the folks along the lower Russian River,”We’re kind of a little nervous that they’re trying to sneak it in this year,” he says cautiously. “It’s going to be a battle. We’re going to fight it as far as we can.”

A public hearing for comments on this year’s decision to cut the Russian River to 85 cfs with be held after the regularly scheduled State Water Resources Control Board meeting on Tuesday, June 5, Joe Serna Jr./Cal-EPA headquarters building, Coastal Hearing room, second floor, 1001 I St., Sacramento; the Russian River session will start no earlier than 11am.