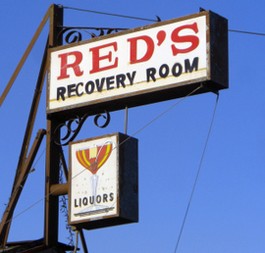 Immortalized by Waits in 1999, it’s a place to celebrate and mourn, a place where you can go by yourself and find old friends or meet new ones, and yes, a place where regulars really do know your name. It’s Red’s Recovery Room in Cotati, and sadly, after losing its lease, the roadhouse bar is closing later this month, probably on July 26.

“We’re not happy; Red’s should stay here forever,” says co-owner Maria Romani, wearing a roller derby T-shirt while sipping a drink at the bar. She hopes to reopen Red’s at another Cotati location.

The ramshackle wooden bar, on Highway 116 about a half a mile west of Highway 101, opened in 1976. Owners Bob (known as Red for his hair color) Lehan and Maureen Lehan took turns tending the bar, which became a place for celebrations ranging from turning 21 to divorcing.

“We welcomed everyone who walked through that door. They became our friends and regulars,” Maureen says, nostalgically surveying the bar last week. “A gathering place is being lost.”

The Lehans sold Red’s in 2003, and Red died in 2004. But Red’s Recovery Room soldiered on, giving people a place to play pool and buy stiff drinks at fair prices.

“It’s a dying, dying dive,” says Michael Mudd, sipping a beer on Red’s outdoor deck. “This is a historic moment.” The burly Mudd works as an electrician and says that one reason he loves Red’s is that anyone can go there straight from work. “Even if you’re sweaty or grimy, no one cares.”

Mudd recalled bringing his elderly mother to Red’s for a drink on a Sunday some 15 years ago. “I know what your Mom needs,” Red said to Mudd before making his mother a perfect martini. “It wasn’t a sin to have a cocktail back then,” Mudd adds.

Red was “a big, six-foot-tall redhead, a beautiful person,” Mudd remembers. “He could handle a bar and stop a fight—he was very polite, but big enough to escort you out the door.”

Like all great old bars, Red’s is filled with stories (liquor was distilled in the basement during prohibition, says one legend). Romani even swears that a ghost appears after hours. “Everyone who’s ever worked here has seen it,” she asserts. Is the ghost Red? Romani says no, adding: “It’s a good ghost.”