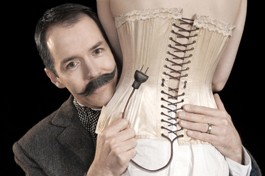 In Victorian times, at the dawn of the arrival electricity, the bulk of polite European society held no particular opinion on the subject of female sexuality, since they had no clue that it even existed. The female orgasm, never called such and limited strictly to the world of abnormal medicine, was called a “paroxysm,” and was believed by doctors to be a beneficial release of fluids that, when built up in certain women, caused the regrettable condition known as “hysteria.” With the advent of electricity, the vibrator began to be used in certain medical offices, and in Ruhl’s exhaustively researched play, we allowed to take a peek inside such an office.

Dr. Givings (Paul Niebanck), with his able, efficient assistant Annie (Stacy Ross, a frequent favorite at Mill Valley’s Marin Theatre Company), has developed a reputation for successfully treating the symptoms of female hysteria. Working in his impressively equipped home office, next door to his own living room, the doctor keeps the details of this practice from his chatterbox brand-new-mommy wife, Catherine (Hannah Cabell), who starts to become curious after the arrival of a new patient, the radiantly unhappy Mrs. Daldry (Maria Dizzia), whose stiff-and-proper husband (John Leonard Thompson) is worried about her emotional condition and lack of interest in “marital relations.”

With the simultaneous appearance of Elizabeth (Melle Powers), Catherine’s African-American wet-nurse, and the handsome artist Leo (Joaquin Torres)—a rare “male hysteric”—Ruhl sets the scene for a series of surprises, discoveries and personal evolutions. The excellent cast, some of whom are required to bare themselves emotionally and otherwise, carry the story to its satisfyingly moving conclusion (a climax in more ways than one). Compassionate and illuminating, In the Next Room is an electrifying entertainment.