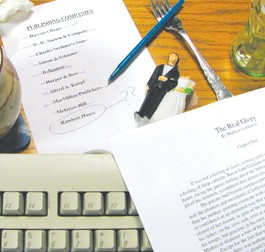 For fans of live theater, there are few things more exciting or nerve-racking than the world premiere of a brand-new play by a first-time author. They are exciting because without a constant stream of new plays into the pool—and new authors to write them—theater would have no future, and the appearance of a new play, any new play, is a sign that theater is alive and well. What’s nerve-racking are those very words “new” and “first-time.” We often presume that the work of a “first-time” playwright will seem amateur and unpolished. And when that first-time author is local, someone we might even know, then the stakes are even higher.

With The Book of Matthew, the debut effort by Sonoma County playwright Gene Abravaya, well known for years as an actor, director and theater marketing expert, there is every reason to be excited and (whew!) absolutely no need for polite concern. The Book of Matthew is an assured and emotionally rich delight. This lovely and affecting autobiographical comedy-drama, launched last weekend with a first-rate production by the Pacific Alliance Stage Company, marks the debut of a significant new voice, one that has already been heard outside Sonoma County; The Book of Matthew has just been selected as the 2010 Studio Theater season-opening play of the Old Town Playhouse in Traverse City, Michigan.

The PASCO production of Matthew, with an exceptional cast that is as adept at the play’s many comedic moments as it is honest and effective in the dramatic twists and turns, easily ranks as the best show to date in PASCO’s current season, with fine, perfectly paced work by director Hector Correa, who also gives a charming, multilayered performance in an important supporting role.

Matthew Liebowitz (Tim Kniffin, superb and perfectly cast) is a bitterly witty, barely employed New York novelist, making pizzas by day while sweating out the fate of his long-in-the-works first novel, which has been rejected by every major publisher but one. He has recently separated from his wife, Maggie (a wonderful Jennifer Coté), a soap opera actress who clearly still loves her husband but misses the hopeful, generous man he used to be.

Depressed and broke, reduced to drinking sour milk and eating days-old pizza, Matthew reluctantly agrees to watch over his aging, irascible father, Howard (the great Will Marchetti, giving another in a long string of inventive performances), who’s become all but mute since the death of his wife, giving only grunts and single-syllable responses to his family’s desperate attempts at conversation.

Matthew’s high-strung bookkeeper brother, Robert (well played by Jeff Coté), is frustrated at Matthew’s stubborn commitment to writing the Great American Novel (Matthew once had a great-paying job writing for Maggie’s soap opera but concluded that it was beneath him), while Robert’s whirlwind of a wife, Karen (a hilarious Priscilla Locke), is baffled that her brother-in-law can’t see that his wife still loves him. Reluctantly, Robert and Karen leave the elder Liebowitz in Matthew’s care to embark on a long-delayed vacation.

The first act, with its situation-based comedy and clever one-liners (“My wife didn’t leave me because I’m a slob. She left me because I’m a neurotic slob!”), reveals Abravaya’s former career working as a stage manager and producer of Hollywood sitcoms, but there is remarkable depth and potency to the story’s loving, second-act tidal wave of emotion, as Matthew and Howard engage in long overdue father-son combat, made all the more astonishing by Howard’s reluctance to use actual words to convey his feelings. Abravaya, while peppering the play with laughs, never shies away from strong, dramatic revelations, some of the best coming from Correa as Vincent Alcedo, Matthew’s gay, middle-aged, chorus-boy neighbor, with whom Howard forms an unlikely bond.

With this solid, entertaining production, Abravaya and company movingly examine the pain and frustrations of lifelong dreaming, and the cost—and intermittent rewards—of hoping against hope. For Abravaya, who finally gets to demonstrate his considerable skill as a playwright, the payoff has been well worth the wait.