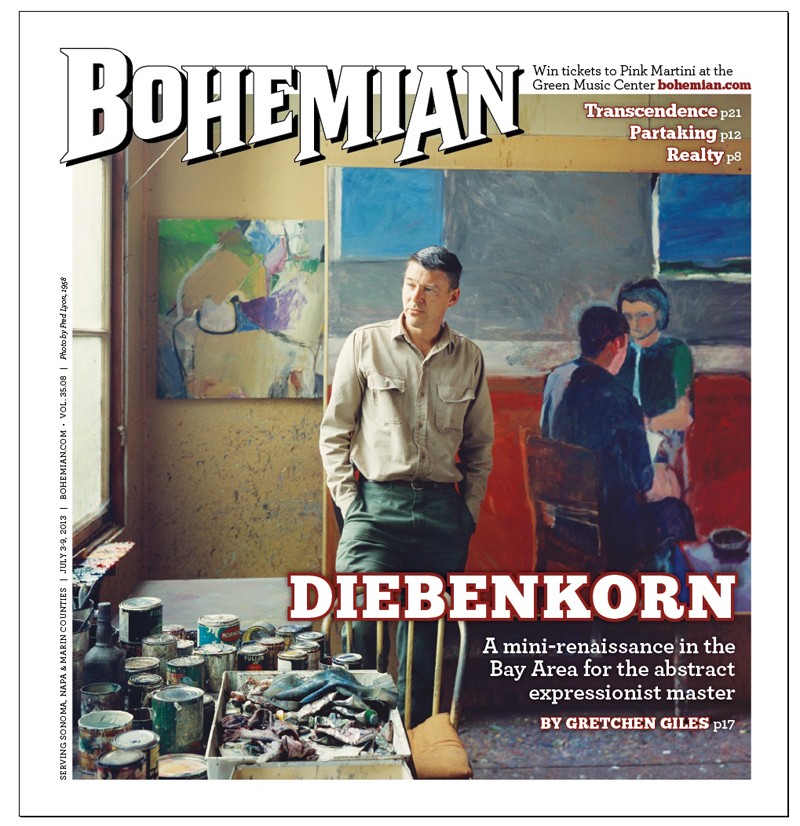 The North Coast painter Peter Onstad has a story he likes to tell. It was Nov. 22, 1963, and he and a friend were walking down a Berkeley street. A boy ran past them and shouted, “The president’s been shot!”

Most Americans tearily gathered around television sets and radios. But not Onstad and his friend.

“We had bigger fish to fry,” Onstad remembers. “We had an appointment with Richard Diebenkorn!”

That meeting Diebenkorn would be an appointment more urgent to Onstad than learning the details of President Kennedy’s assassination is but a small surprise to those who care about fine art.

Diebenkorn is set for a mini-reniassance of sorts in the North Bay and beyond, as two new exhibits open and two locally published books see release in the immediate future. To those same people who care about fine art, this is no surprise at all, a deserving recognition of the man who, before his final years in Healdsburg, left a legacy that’s still being rediscovered.

Arguably the most important painter to come from California, Diebenkorn was raised in San Francisco and fated to attend Stanford, where his father fervently hoped he would put away what he termed his son’s “fine avocation” and instead study something real, like medicine or law. But having seen a van Gogh at the de Young Museum with his grandmother in 1936, Diebenkorn was one of those rare folks who knew early on what he wanted to do with his life, and that was to paint. After Stanford, he enrolled in the California School of Fine Art, now known as the San Francisco Art Institute. His first one-man show was held at San Francisco’s Legion of Honor in 1948 when he was just 26.

Influenced by Willem de Kooning, as well as Matisse and Cezanne, Diebenkorn came of age just after WWII, when abstract expressionism held sway among young artists, mostly men well into their 20s who were just back from the corps, ready to attend college on the GI bill, and who brought with them the rage and loss of an unwanted early maturity amid gruesome war. Figures were exploded, backgrounds receded, rules were broken, everything changed.

Diebenkorn was quickly swept up into the San Francisco ab-ex movement in league with Clyfford Still, David Park, Frank Lobdell, Hassel Smith, Horst Trave and others. His daughter Gretchen remembers that as a time when, if you saw a figure in a painting, you never mentioned it. Representation was forbidden; emotion was all.

As always, the art community was divided, with New York painters claiming abstract expressionism as their own, and West Coast painters having to add the geographical descriptor “San Francisco” to the name. But in his 1997 American Visions PBS project, the great art critic Robert Hughes put the record straight.

“To me, the best abstract painter of the time wasn’t in New York at all,” Hughes intoned. “His name was Richard Diebenkorn, and he lived in California. He painted some of the most intelligent responses to Matisse that any American had done.”

By 1950, Diebenkorn moved his wife, Phyllis, and their family to New Mexico while he pursued a masters degree. By 1953, they were back in the Bay Area, settling into a comfortable house in the Berkeley hills, where they were to remain for the next 13 years. He moved again, in 1965, to Santa Monica, where he would produce his Ocean Park series of abstracts, the best-known suite of work in his oeuvre. Diebenkorn retired to Healdsburg’s Alexander Valley in 1988, and lived there until his death in 1993.

Hugely celebrated, the Ocean Park series was honored in a massive 1997 exhibit emanating from the Whitney Museum that traveled to the San Francisco Museum of Modern Art, among others. A piece from that period, Ocean Park No. 117, sold at a Christie’s auction in 2009 for $6.5 million, just shy of the $6.7 million that marks his most expensive canvas.

The work, both figurative and abstract, that Diebenkorn produced during his East Bay tenure is less well known. That oversight has been remedied with “Richard Diebenkorn: The Berkeley Years,” a lush, stunning new exhibit at the de Young Museum running through Sept. 29.

“It was during this period that Diebenkorn really became Diebenkorn,” argues Timothy Anglin Burgard, the Ednah Root curator-in-charge of American art at the de Young.

“His artistic integrity rendered him immune to external pressure to conform to either abstract or figurative styles, and set a liberating example that seems remarkably prescient given the inclusive nature of the contemporary art world.”

Not to be outdone, the College of Marin art gallery is undergoing a summer facelift in order to host a 40-piece show of Diebenkorn’s works on paper this September in conjunction with two new books on the subject introduced by painter Chester Arnold, a longtime COM faculty member, and produced by novelist Bart Schneider through his Kelly’s Cove Press.

The Bay Area could be said to be suffering from a delicious delirium of Diebenkorn fever.

Seated at the outside table of a Sonoma cafe one early morning last month, Arnold and Schneider allowed a visitor to admire the two books they have produced. One, From the Model, concentrates on Diebenkorn’s figures; the other, Abstractions on Paper, on his nonrepresentational pieces. Each is small enough to slip into a purse or read in bed, and cost just $20 apiece.

Seeing that the de Young was preparing to mount a large exhibit, Schneider thought to produce an accompanying book centering on Diebenkorn’s 4,000 or so works on paper. He approached the Richard Diebenkorn Foundation about the project and, he says, “they kind of lit up. That great work is just sitting there in their databases.”

Schneider asked Arnold to help him choose the images and write a short introduction to each book. Arnold asked the College of Marin to mount a show. Things started rolling. After Kentfield, it will travel the country.

Arnold, a highly regarded painter just returned from a one-man exhibit at the Katzen Arts Center in Washington, D.C., remembers that he first saw Diebenkorn’s work in reproduction. It caused what he calls “a spark.”

“That’s why I think that these books are so important,” Arnold says, sitting over a cappuccino. “You don’t need to see an original to get a spark. And that spark was something that really appealed to me. I was doing a lot of figure drawing at that time. Not that I patterned myself after him, though I did go through a Diebenkorn period in the late ’70s, I have to say.

“After the Ocean Park series came out, I started to rethink lots of composition and my use of diagonal. It was born from a tremendous admiration for someone who was a lot more refined than I thought I would ever be. It’s elegant, thoughtful, profound—transcendent.”

Schneider adds, “I think it’s a combination of really richly imaginative work, but it has a coherence to it, you know. Somehow, we can approach it. And,” he shakes his head, “it’s so damn handsome.”

The works on paper held by the Diebenkorn Foundation are all digitized and include pieces perhaps no one has before seen, stuff hidden in drawers, scraps from the studio floor. After choosing the work, Arnold wrote a grant to have the works framed and readied for shipping.

But choosing the art was all the fun.

“It was much easier than I had originally thought,” Arnold says. “Visually, [Schneider and I are] very much on the same page. We just sat together at the computer, and in a few hours, we had done the first cut. The difficult thing for me to get my head wrapped around was, ‘Here I am, sitting here, cutting Diebenkorn?’

“It’s an embarrassment of riches,” he laughs, “but someone had to do it. We tried to pick pieces that had some kind of unique spark to them or that were particularly good versions of all the different genres he was exploring from those early ink things to the collages with the cut-outs.”

The College of Marin show will open just before the de Young show closes.

“In some ways, for purposes of clarity and appreciation, to see a small show like that of really beautiful drawings is a really unique way of appreciating what he did,” Arnold says, “just as these books are, because they’re closer in size to the actual work, and will start to feel closer to the real feeling that’s coming off the work.”

In his recent review of the de Young exhibit, San Francisco Chronicle art critic Kenneth Baker derides the show as having “the opposite of its intended effect of boosting the artist’s stature,” arguing that by focusing on Diebenkorn’s Bay Area years, the museum gives yet another boost to the “cultural prejudice” in favor of New York and European artists.

The group at the cafe table just sighs.

Arnold, who was raised in Germany but has long resided in California, has surely felt the sting of this “cultural prejudice” before. He takes the long view.

“It’s only New Yorkers who have to do that; they build a fortress around themselves,” he says calmly.

Previous ArticleJuly 5: Strike to Survive at the Arlene Francis Center