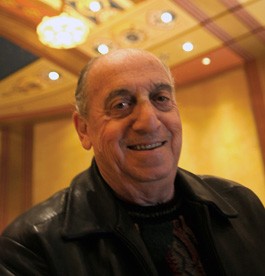 There it stood, for over a decade, a symbol of the times. Once it housed laughter, furtive kisses in the back row, Friday-night family outings. And then, 10 years ago, it was shuttered. The closed Uptown Theatre, once a jewel of 1930s architecture then tragically boarded up with plywood, was a sad reminder of the death of Napa’s once lively downtown nightlife.

It made George Altamura sad, too. When he bought the building from Santa Rosa theater mogul Dan Tocchini in 1999, the theater had been carved into four separate auditoriums, the heater didn’t work, the projectors were in disrepair and attendance was down. His goal was ambitious: to restore the Uptown to its original glory, the way it was in Altamura’s teenage years, when he’d show up to movies with a girl and never really watch the movie, if you catch his drift.

It took 10 years. But he’s done it. Reopened this year as a live music venue, the beautifully restored Uptown Theatre stands now as Altamura’s gift back to the city he loves, and something he proudly calls his life’s greatest achievement. For the time, effort and cost put forth—he hasn’t disclosed exactly how much—we are glad to honor Altamura with a 2010 Boho Award.

Even as a kid growing up in Buffalo, N.Y., Altamura used to draw the state of California in his school notebooks, dreaming of the West Coast. At 16, still in high school, he hitchhiked to Napa in a 1940 GMC panel truck, awed by the nightclubs, dancehalls and, yes, the Uptown, which he describes as “the magnet of the city.” He longed to stay, but his mother called him back home to finish school.

As soon as he graduated, he was back in Napa, working for Julian Weilder’s Rough Rider clothing factory on Soscol Avenue. He had nothing at first, sleeping in a neighborhood rabbit hutch and accepting sandwiches the girls at the factory would bring for him, feeling sorry for the charismatic newcomer. The year was 1949.

Fast-forward several decades, and Altamura, 79, is now one of the most prominent developers and downtown property owners in Napa. He acknowledges this hasn’t always made him the most popular figure in town.

“They raise hell about me all the time,” he stoically said earlier this year. “They say, ‘He’s got half the downtown empty because he wants those high rents.’ They don’t realize, I’d rent tomorrow morning for half of what it’s worth to get ’em full, but nobody’s looking to come in. There are no stores looking around to rent.”

Yet one thing his naysayers concede is that even in such a sour economy, Altamura took the chance on reopening the Uptown, and beautifully so. On the night of the grand reopening, under the relit vertical neon sign and the shimmering marquee outside, no one could argue that Altamura hadn’t pulled off a modern miracle.

Inside, the ceiling mural that was once covered up by blue latex paint had been painstakingly restored to its original form. The lighting fixtures were custom-made to match the exact original fixtures discerned from an old photo that someone unearthed during the renovation. The walls were recovered, the lobby repainted and the seats custom-ordered to match the art deco Egyptian décor. It was just like walking in on opening night—in 1937, the year the theater originally opened.

Under the management of the able-minded Sheila Groves-Tracey, who for 15 years booked the Mystic Theatre in Petaluma, the Uptown has already brought in big names to the valley, including Merle Haggard, Lyle Lovett and Lucinda Williams. B. B. King is coming next month. For a town that just 10 years ago had fallen virtually silent to live music, the Uptown isn’t just a sentimentalist’s dream come true; it’s a valuable cultural gift from the normally business-conscious Altamura, even as the lingering recession has cut into concert ticket sales nationwide.

“It’s a big risk,” Altamura admits. “I know that. But you can’t think that way. When I first came to Napa, I had a feeling for the town. Other people have that same feeling for this theater. Every place I go, people stop me and say, ‘George, what you’re doing with the Uptown, I’m just so happy.’ All the people that badmouthed me, now they’re saying better things.”

Next ArticleSept. 29-Oct. 6: Across the Bridge