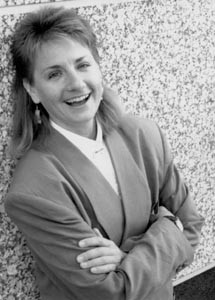 ‘Goddess on a Payroll’

Divine intervention: Monica Grant co-stars in Goddess on a Payroll.

‘Goddess on a Payroll’ serves up smart sketch comedy

PHILANTHROPIST Andrew Carnegie was once asked how he could afford to pay his staff so well. He replied, “I can’t afford to pay them any other way.” Those interested in entertainment beyond the stock options often offered by local theater can’t afford to miss Goddess on a Payroll, which cashes in its run at the Romantic Tea Room this weekend.

Featuring the awesome talents of comediennes Monica Grant and Teresa Chandler, Goddess on a Payroll (admirably directed by Stephen Drewes from an original script penned by Grant) is such a knee-slapper that your patella will crumble.

Two parts literate sketch comedy and one part seriocomic “Portrait of the Artist as a Young Lesbian,” the show delivers from the moment the vivacious Grant squawks out a couple of notes of Gershwin on her enviro-horn (a garden hose affixed to a funnel). In under 90 minutes, Grant and Chandler (sounds like a Golden Age comedy duo if there ever was one) rifle through a piquant cavalcade of sketches, monologues, and songs expertly crafted by the Dramalogue-winning Grant.

Its hilarious lifestyle humor and obvious appeal to a specific fan-base (hardly a Y chromosome could be found in the audience on opening night) notwithstanding, Goddess on a Payroll is not a “special interest” show, and Grant and her cohort are not “niche” performers. The show is ultimately an examination of love and loss, relationships and art, that will appeal to audiences of all persuasions. That Grant is able to create simultaneously a very personal yet universally appealing show testifies to her estimable talents as a writer.

Among her standout sketches is a brilliant (nay, divine) parody of the ’70s prison documentary Scared Straight. Redubbed Scared Single, the skit features two hard-boiled lesbians “doing 25 to life in bad relationships.” Booked on such charges as “assault with a deadly ego and accessory to drama” as well as “martyr in the first degree,” these hardened gals are easily as fierce as anyone from Scorsese’s stable of goombahs. They take several comic turns while tough-talking preventive counseling to the audience. And the skit closes with a doo-wop song.

Later, Grant and Chandler prove themselves masters of the sight gag during a bit where one lover begins to confide in another while waving incrementally larger “red flags” over her head as she “discloses inappropriately.” The visual pun is devastating.

The duo takes another crowd-pleasing turn with a rollicking lampoon of pop culture goddess Xena, Warrior Princess, and her sidekick Gabriella. Devised as a flashback, the skit details the relationship’s romantic back-story while Grant gallivants across the floorboards in full-tilt Xena regalia.

“Lesbian subtext? Is that all it is to you?” she asks skeptically.

Throughout, Grant makes several asides chronicling the gradual loss of a friend who is stricken with AIDS. Grant effectively uses these moments to illustrate the resilience of the human spirit and the necessity for art in the face of emotional peril. The poignant result is one of many examples of the show’s ability to shift modes with finesse.

Goddess on a Payroll is an inspired and energized evening of comedy, highly recommended to anyone who has been in love or knows the toils of the creative life. The show has sold out on the fringe circuit and will certainly do so locally, so audiences are encouraged to reserve tickets now. These women should be on salary!