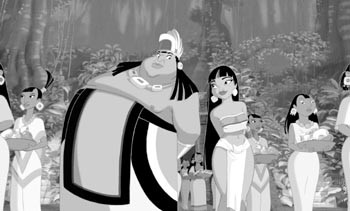 ‘The Road to El Dorado’

The Road to El Dorado, a new animated film that features the talents of Santa Rosa-born animator Rick Farmiloe.

TO RICK FARMILOE, an animation whiz kid with an eye-popping résumé, his latest film–DreamWorks Pictures’ The Road to El Dorado–marks not one but two important milestones.

This isn’t just Farmiloe’s 10th consecutive animated flick. It’s also the movie in which he moves from drawing sidekicks to animating one of the show’s major stars. Farmiloe played a major role on the team that brought to life Tulio (voiced by Kevin Kline), a semi-incompetent 16th-century scoundrel who, along with his equally unlikely partner, Miguel (Kenneth Branagh)–accidentally discovers El Dorado, the mythic City of Gold, hidden in the mysterious jungles of the New World.

Farmiloe, a Santa Rosa native, found his own New World among the animation studios of Hollywood. Unlike Tulio and Miguel, however, this adventurer had always known what he was looking for–and where he would find it. Farmiloe, 43, was dreaming of becoming a big-screen animator as far back as 1971, when he first began attending Montgomery High in Santa Rosa.

“I was just a little kid when I knew I wanted to draw cartoons,” he says. “Some of my first high school art teachers, unfortunately, seemed to think that cartoons were a waste of time.”

Unable to persuade Farmiloe to pursue a fine-arts career, his instructors finally gave in and supported his fledgling attempts at animation.

“Montgomery High ended up being a great experience,” he says. “I got a lot of encouragement and support.”

After attending SRJC and then the California College of Arts and Crafts in Oakland, Farmiloe landed a job in Southern California, animating a series of television shows, including Fat Albert, Mighty Mouse, and Heckle and Jeckle.

Eventually he moved all the way up to Walt Disney Studios, where his first feature was the infamous failure The Black Cauldron.

“Ouch,” Farmiloe says, cringing at the mention of that film. “I’d hoped people would forget all about The Black Cauldron someday.”

Farmiloe got into a groove animating goofy sidekick characters: Einstein, the lovable Great Dane in Oliver & Company; Scuttle the seagull in The Little Mermaid; the clumsy albatross airline pilot in The Rescuers Down Under; and the inept Le Foo Beauty and the Beast.

“I like doing sidekicks,” says Farmiloe. “So that’s what they always gave me.”

Any such large-scale character, he explains, has a team of several animators assigned to it. They learn the character’s moves and facial expressions, getting to know him or her literally upside down and inside out.

“It gets to where you know exactly how that character would react to any given thing that happens,” Farmiloe says.

After leaving Disney in search of more creative freedom, he briefly freelanced, working on The Swan Princess for Rich Studios, before finding a new home at the brand-new DreamWorks studios, where his sidekick status continued. “I did the camel in Prince of Egypt,” he says. “But he was a really fun camel.”

Then came The Road to El Dorado, a fast-paced, swashbuckling buddy comedy set in an ancient Mayan wonderland. The main characters, two goodhearted rogues, are mistaken for gods and decide to go on playing the part–until they can make their escape with bags filled with gold.

Under constant threat of discovery, and certain death by ritual sacrifice, Tulio and Miguel look as if they might get away with their scheme. But then the partners each fall in love: Tulio with the alluring Chel (Rosie Perez), and Miguel with the city of El Dorado itself.

The songs, by The Lion King‘s Elton John and Tim Rice, are tuneful, though a bit intrusive at times, and the subject matter–including Tulio and Chel’s amorous romp in bed–have earned the film a PG rating.

“Chel originally invited Tulio to take a bath with her,” Farmiloe reveals, “but we decided that was going too far.”

Though not as consistently visually awe-inspiring as Prince of Egypt, the new film nevertheless marks a significant step forward in animation characterization. From Tulio’s and Miguel’s distinctive body posturing to their amazingly realistic (and funny) facial expressions, Farmiloe and his many collaborators (who include another Sonoma County born artist, Ruben Hickman of Sonoma) may have created the best-acted animated humans in memory.

“There’s a lot of pretty sophisticated acting done by the characters in Road to El Dorado,” Farmiloe says proudly. “In the old days it would have been ‘Here’s the scared face, here’s the happy face, here’s the sad face’–and now we have a wider range of subtle emotions, so the audience can always tell what poor Tulio is feeling and thinking.”

Too bad animated characters can’t get Oscars. Thanks to Farmiloe and DreamWorks, “poor Tulio” would be a shoo-in.