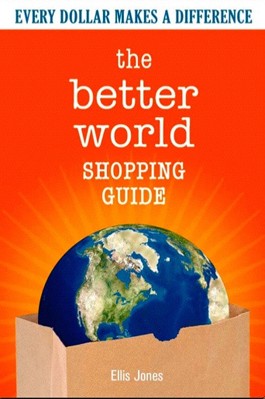 Presents of mind in conscious shopping

When Alorha Breaw discovered the pocket-sized paperback The Better World Shopping Guide: Every Dollar Makes a Difference, she immediately bought 17 copies. That was all the store had in stock.

“I’ve given them for everything from birthday gifts to housewarming presents,”

Breaw explains. She adds that they’ll make great stocking stuffers this holiday season. Breaw keeps one copy for herself, but laughs, “I’m having a hard time hanging on to that one.”

She uses the guide every time she shops, whether it’s for groceries, wine, clothing, gasoline—anything at all. “It’s a wealth of resources in one,” she explains. “When you’re out shopping, it’s an easy, easy, easy reference guide. And you don’t have to feel guilty as you make choices.

“The book covers 73 categories from airlines to wine, and gives manufacturers a letter grade of A to F—just like in school. Under the gasoline category, Exxon gets an F, and is described as the “#1 worst corporation on the planet” and a “renowned human rights violator.”

The book is based on the idea that individual dollars are becoming more powerful than individual votes. The average citizen casts a vote every few years—maybe every few months if the ballot initiative process goes into overdrive—while folks who are politically apathetic, unmotivated or overwhelmed might cast a vote even less often.

Yet consumers register their desires daily by how they spend their dollars. In this season of gift-buying frenzy, we’re making constant statements about which products we prefer, which stores we frequent, which websites get our credit card numbers.

“We do have a lot of power and influence, if only we can figure out what our real choices are,” says University of California sociology professor Ellis Jones, author of both The Better World Shopping Guide and the larger paperback The Better World Handbook: Small Changes That Make a Big Difference.

The power base in our society is shifting, Jones asserts.

“We have to come to grips with the idea that the economic realm may be becoming more important than the political realm. That’s just a reality. We may live in a democracy in the political world, but in the economic world, we don’t have a democracy. But we do have a role in that realm in that our dollars are our votes.”

“The bottom line is that every one of these companies needs our dollars to survive. It’s their lifeblood.”

So for the socially aware, it isn’t necessary to give up gift-giving on moral or ethical grounds, or to give only donations to worthy causes instead of actual presents.”

[The guide] provides a powerful way to make choices during the holiday season to allow your gifts to be both something nice that you’re giving family and friends, but also something nice for parts of the planet you’ll never see and for people you’ll never meet.”

Published in November 2006 with absolutely no marketing budget, the guide has already sold more than 20,000 copies. There’s a companion website at www.betterworldshopper.org, which lists background information, sells an iPod form of the guide and is beta-testing a cell phone version. The guide is also on sale at Amazon.com and has been spotted in large book chains like Borders and Barnes & Noble.

“It’s even sold at Wal-Mart—ironically, because Wal-Mart doesn’t rate too well in the book,” Jones laughs.

He recommends buying it through independent bookstores, fair trade shops or the website—but not because he’s focused on sales.

“It’s not really about the book. It’s about getting the information to people so they can make better purchasing decisions. We want to have people shift their dollars.”

Which makes holiday gift-giving work on more than one level.