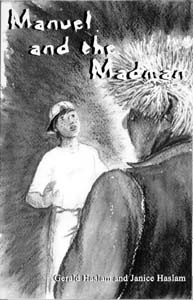 California’s diversity shines in ‘Manuel and the Madman’

DON’T JUDGE a book by its cover, we’re often told, so maybe it’s not quite fair that the first thing some folks will notice about Manuel and the Madman is the name of one of the book’s two authors.

Still, it’s a hard name to ignore. Gerald Haslam has been called the quintessential California writer, and a quick look at his body of work tells you why. Among other things, the hugely prolific Penngrove author has published one novel, eight collections of short fiction, and several works of nonfiction, including the critically acclaimed Coming of Age in California: Personal Essays. Most of this native son’s work, like his life, is a thoughtful exploration of life in the Golden State.

This time around, Haslam has teamed up with his wife, Janice Haslam, who teaches at a Petaluma high school, to write something a bit different–a novel for teenagers.

Set in a modern-day Bakersfield barrio, Manuel and the Madman (Devil Mountain Books; $9.95) follows the adventures of its adolescent narrator, Manuel Ryan, as he tries to adjust to a new life with his grandmother after his parents separate and go off looking for work.

Half Chicano and half Anglo, Manuel soon discovers that being a blonde kid puts him distinctly in the minority in seventh grade at Our Lady of Guadalupe School. His new friends speak Spanish, wear their baseball caps backwards, and tease him about being white. Manuel begins to hate his blond Anglo looks so much that he tries to dye his hair with shoe polish.

But the neighborhood is changing fast. The racial picture grows more complex as kids with names like Tran and Phuc enroll in school, and gangs and guns begin to draw Manuel’s buddies into their deadly orbit. All the while, the narrator is struggling with typical adolescent questions about sex and God and his parents’ separation.

Unfortunately, most of the adults in his life aren’t much help in these matters. His absent father is mysteriously incommunicado. His priest is content to warn him against the grim crime of self-abuse. Worst of all, his abuelita, his grandmother, is highly traditional and deeply superstitious, and she despises the newcomers to the neighborhood–“los otros,” as she calls them.

But Manuel does find a sympathetic ear and a kindly voice in his wise but eccentric neighbor, Mr. Samuelian, an Armenian immigrant who is the madman of the book’s title. With the old man’s help, the boy comes to terms with the kids in his neighborhood and with his own multicultural identity.

This novel’s greatest strength lies in its presentation of life in the barrio. Kids of all races come together to curse, fight, and make friends in a fairly realistic fashion on the neighborhood’s colorful streets. The authors also bring California’s rich history alive as Manuel encounters aging vaqueros who tell him stories of cowboy shootouts in old-time Bakersfield.

Now for the tough part. It’s no fun to criticize a book this well intentioned. But there are, it must be said, a few problems with Manuel and the Madman.

The plot has a wandering, accidental feel to it, with too little dramatic tension and not enough clues about where we’re going next. For instance, the book makes much of the fact that Manuel misses his parents. But then his mom just pops up without any fanfare as a casual aside.

Then, too, many young readers will grow tired of Mr. Samuelian, who offers endless lectures about tolerance, compassion, and other virtues. Using a novel to teach moral lessons to teenagers is fine, but a more subtle approach might work better.

Far more entertaining is Mr. Samuelian’s hilarious brother Haig, who wears an eye patch over a perfectly good eye just so he can tell kids tall tales about how he lost his vision.

Here’s Haig discussing an epic battle of his youth: “I had saved my final strength. With it, I threw the ruthless Nizibian from me and broke everything on him that could be broken. I broke several things that could not be broken. He never fought again. . . .”

And therein lies Manuel and the Madman’s ace up the sleeve. From Haig to the vaqueros, the book offers a cast of richly realized minor characters, an array of personalities as colorful and diverse as California itself. And if you’ve taken a good look around lately, you’ll realize how significant an accomplishment that really is.