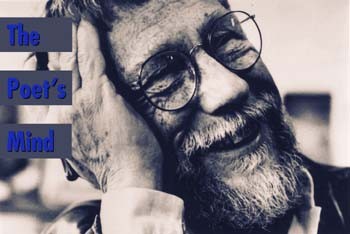 Zen and the Art: Poet Gary Snyder laughed when asked if he could be seen as a mountain writing a river. “More like a river writing down a mountain,” he said.

Gary Snyder’s epic is complete, but his journey is far from over

IF THE LIFE of an artist is a journey, a long travail down the perennial roads less traveled, seeking with intent a life lived for the chunky joy of experience, for the hopeful accompaniment of knowledge, and with a relish for hard knocks, then poet and activist Gary Snyder has just come around one hell of a bend in the road.

With the publication of his eagerly anticipated masterwork, Mountains and Rivers Without End (Counterpoint; $20), Snyder, 66, has finally completed his own version of what his comrade Jack Kerouac attempted with his innovative beat epic On the Road. Snyder’s road has just been a mite bit longer.

Mountains and Rivers, 40 years in the making, chronicles the life of the artist as a young, middle-aged, and aging man as he investigates both the mutable world and the immovable elegance of nature. Snyder appears Dec. 11 at the Luther Burbank Center to read from and discuss this effort.

Informed by his deepening devotion to Zen Buddhism–one that has encompassed all his adult life–the project was inspired by Snyder’s graduate studies as a young man at UC Berkeley in the 1950s, studying calligraphic art and Oriental languages. Moved by the differences in Eastern landscape paintings from those painted in the West, he was particularly affected by one scroll, entitled Mountains and Rivers Without End, in which the movements of pen and brush depicted the spiritual world of the natural in a way that prompted new sight.

“I pursued it intuitively,” Snyder says by phone from his office at UC Davis, where he is a professor of creative writing as well as the co-founder of the innovative interdisciplinary Nature and Culture program. “I was letting [Mountains and Rivers] show me itself as it would. But on the other hand, I was researching things about it, and some sections took as long as five years to complete. It was a very deliberate process that nonetheless opened itself up to intuition.”

Snyder’s research led him to learn about geomorphology, about river systems and watersheds. An ancillary effect of his preparations for sections of Mountains and Rivers has been his work on the Yuba Watershed Institute, an effort he joined with his “brilliant and cranky neighbors”–so called in the book’s end piece–to protect the fierce nature of their homesteads. And it also has led him to deeply consider those opposing complements: stone and water.

“The term ‘mountains and rivers’–those two combined in Chinese mean ‘landscapes,’ and that’s an interesting note,” Snyder says, “because that’s exactly what [the Chinese] mean when they refer to landscapes. But in Buddhism, there is also a traditional metaphoric association that goes way back, with mountains symbolizing a kind of stubborn, fierce, persistent energy–which, indeed, they do. Rocks are hard; they resist erosion. And there’s is an old tradition of the forces and nature of water as being fluid, flexible, all-permeating, all-embracing, and necessary to life.

“So, in Buddhist thought,” he continues, his voice warming to his subject, “those are shorthand symbolic terms for wisdom as willed spiritual energy, and compassion as the wise fruit of that energy. They go on to say in the Buddhist tradition that for the bird of enlightenment to fly, it must have two wings: the wing of wisdom and the wing of compassion. That wisdom without compassion is cold and arrogant, and that compassion without wisdom is often foolish. So, there’s also the sense that the two are essential to each other.

“Mountains bring the precipitation down, and precipitation brings the mountains down,” he finishes, “so there’s this sharing here and this giving there–an interaction that is persistent throughout all of geological time.”

But don’t let Snyder’s professorial tone put you off. What makes Mountains and Rivers such a pleasure to read and discuss is the almost tuneless depth of the schemes and the scenes wrought. Accompanied with the elegiac and the dense are soaringly simple pieces of reflection and addition. A midpiece, “Three Worlds, Three Realms, Six Roads” examines the various habitats of Snyder’s life in “Things to Do” lists that begin with his upbringing on a Northwest dairy farm, which section ends:

The poet traces his young manhood, the solitude of his internship as a fire-lookout (for which job Kerouac immortalized him as Japhy Ryder in his Dharma Bums), through his travels in San Francisco’s frenetic artist milieu of the ’50s (“Suck in the sea air and hold it–miles of white walls–/ sunset shoots back from somebody’s window high in the Piedmont hills/ Get drunk all the time. Go someplace and score”) to his long residence in Kyoto, Japan (“Get up at four in the morning to go meet with the Old Man./ Sitting in deep samadhi on a hurting knee./ Get buttered up by bar girls, pay too much/ Motorcycle oil change down on Gojo/ Warm up your chilly wife, her big old feet”).

Invited by a fellow artist on Buddha’s birthday in 1956 to sip the ceremonial green tea reserved for high occasions, Snyder decided to write a work of poetry that would render in words that which the scroll had depicted in images. Of the 16 other books that appeared along the way, one–Turtle Island–won the Pulitzer Prize for poetry in 1975.

Snyder lived in Kyoto for some 13 years. There he spent his days in the solitary pursuit of Zen wisdom, translating texts from Chinese and Japanese and teaching English. Returning westside, he traveled by foot and by thumb throughout the United States, working logging stints and on oil rigs, and making a point of walking the great vasts of his birthland. He has married several times, raised four children, and built a home in the tough environs of the Sierra Nevada’s Yuba River, living for more than a decade without electricity and running water. But through all the changes and challenges of his life, Snyder has dutifully kept a notebook, never letting the thought of this epic go.

Forty years is one long time to be immersed in the same project, and Snyder finally knew that he had come to the end when he wrote a poem about the desert in this epic of land and water. Centering on a return to an arid plain he had visited as a youth, this time accompanied by his children and fourth wife, writer Carole Koda, Snyder depicts a moonlight revel, Venus benevolent in the heavens, the company crunching contentedly on fried grasshoppers. Ever aware of his script as a scroll, the poet leaves the scene upon the page, noting:

“The space goes on./ But the wet black brush/ tip drawn to a point/ lifts away.”

“This is a realm where there is neither mountains nor deserts–but this is about going out into another space,” Snyder says, “into what you might call emptiness, which,” he laughs, “is also a Buddhist philosophical term.”

He refuses to sentimentalize his life’s journey. “I was lucky to hit on some good things early in my life,” he says, “and one of them was Buddhism, and that has steered me in a good direction.” As to his next effort, Snyder is similarly workmanlike.

“Now I gotta clean up the workshop,” he says simply. “Sweep the sawdust off the floor, pick up the wood chips, finish this project up, and then I’ll look around and see what I want to do next.”

From the December 5-11, 1996 issue of the Sonoma Independent