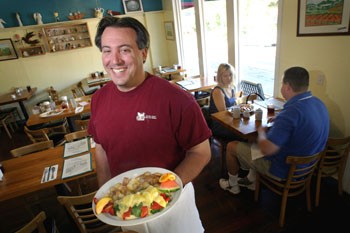 Casual cafe food gets the white-glove treatment at Garden Court

The Garden Court was, for years, located on a particularly bucolic stretch of Highway 12 in Sonoma Valley. On weekend mornings, its parking lot would be overflowing and people would have to improvise parking spots on the side of the highway. That’s a good sign–it means it’s food worth waiting for to many people–but I never was patient enough to score a table.

Now Garden Court Cafe and Bakery is in downtown Glen Ellen (if there is indeed such a thing as a downtown there). Co-owners Rich and Stacy Treglia bought Garden Court Cafe from Peter and Lesley Fay in 1997; before that, it was Fay’s Garden Court. Rich does all of the cooking and baking and, as we shall discover in a moment, jam making.

On weekdays, I learned, it’s possible to just waltz in and grab yourself a table. The place is cheery and small but not crowded, with a décor rooted in the “cute country knickknack” vein–not overdone, but definitely perceptible, with a few curios hanging on the walls and some nicely framed but unexceptional wine country art. There’s a pot-bellied stove in the middle of the room, though being the dog days of summer, there wasn’t much use for it at the time.

Hollandaise-related dishes are a good once-a-year luxury, and Garden Court’s Benedicts are worth the splurge. I’d like to believe that the spinach on my eggs offset the nutritional damage from the generous slabs of crispy-smoky bacon–it’s never too early to squeeze a little something green into your day, particularly when faced with pork products.

But I had ordered Eggs Glen Ellen with two eggs when I should have stuck to one. By the time I’d plowed through all of the bacon, onions, spinach, and hollandaise, there was no room left for the mess of country potatoes on the side. No wonder the waitstaff’s T-shirts read: “If you go home hungry–it’s your own fault!”

Mr. Bir Toujours was roused from his comatose weekend slumber early on a Sunday morning to assist in treading more of Garden Court’s breakfast territory. We drove an hour, most of which was occupied by me warning him that we’d be in for a wait. “I used to not even be able to park at this place,” I said.

This was not what he wanted to hear. Mr. Bir Toujours is not a morning person, meaning that in the mornings, his behavior is not very personlike. Sure enough, we were in for a wait of about 20 minutes or so. It wasn’t so bad, though, because there’s a deck out back under a trellis of grapevines where pots of coffee and pieces of coffee cake and scones are available to soothe the savage beast in nonmorning people. You can even eat some of the grapes from the vines, if you’re feeling adventurous. My one complaint: We discovered this area not because the waitstaff told us about it but because a helpful customer saw Mr. Bir Toujours sulking in caffeine withdrawal on the bench out front and tipped us off.

Once seated, Mr. Bir Toujours was a very good sport when, after I told him he could get whatever he wanted, he said, “Oh, eggs Benedict!” and I said, “No, no, not that–I’ve already tried that.”

He got two eggs over medium instead (“Just Eggs,” as the menu puts it, $8.50 with meat and $6.50 without). As for the sausage patty, it was as sizable as a hamburger patty, almost. Enlightening. All of Garden Court’s sausages are made in-house, and homemade sausage always tastes so much better than mass-produced stuff. I’d like to eventually sample all of Garden Court’s sausages (hot Italian, turkey-apple, and turkey chorizo).

There’s only so much food one can consume in one day, however, and the macadamia nut waffle with fresh fruit and plum sauce ($7.95, the special that morning) I had ordered claimed much of that day’s stomach real estate. A light and golden Belgian waffle was all but obscured under a mighty pile of sliced bananas, pears, apples, and plums–it was like a whole smoothie’s worth of fruit.

The plum sauce was chunky and a deep ruby color, sweet but almost more of a relish than a sauce in its consistency. Plentiful and crunchy macadamia nuts in large chunks studded the waffle’s webbed interior. This was one serious waffle. Even so, I managed to clean my plate without incurring that awful, leaden post-big-breakfast feeling.

Mr. Bir Toujours, a big connoisseur of jam on toast, was delighted with Garden Court’s homemade jam, praising its fruity vibrance. They make their own jelly, too.

This house-made thing is a big part of Garden Court’s appeal. Nothing there is terribly fancy, but the care and attention they put into things typically overlooked–the quality of jam, for instance–make all the difference. Pretty much everything at Garden Court tastes like it was made by some mythical country-cooking grandma clad in calico, the kind of person who scavenges her own wild blackberries and grinds her own meats–like Tasha Tudor, actually, who’s a likely candidate for owning a pot-bellied stove, too.

From the bakery, I tried a brownie ($1.95). Like most of the bakery goods, the brownie tastes as homey as it looks–not sleek by any means, but with its own homespun charm. These things are monster blocks, more on the cakey side then the fudgey side, and dotted with a generous handful of chocolate chips. I left mine in the car in the warming rays of the noonday sun, so it was all oozy when we ate it at the office. It made me popular for about five minutes.

On the lunch tip, Garden Court offers all kinds of sandwiches that will please a food-loving wine country tourist who’s fatigued of cutting-edge cuisine in white tablecloth restaurants. I nearly had a conniption fit when I saw that the special that day was the hard-to-find Monte Christo ($8.95), which is sort of a savory French toast sandwich of turkey, ham, and Swiss cheese that’s dipped in an egg mixture and griddled.

Sometimes Monte Christos are served topped with powdered sugar and raspberry jam on the side, though this version was not. It was stacked into two triple-decker triangles, in the manner of a club sandwich. The problem with this was that the sandwich’s thickness didn’t allow the custard to set fully, resulting in rather soggy, eggy bits on the corners. Those parts I just didn’t eat, but the rest was very tasty. The side of potato salad was dressed with a sour cream and dill mixture and was far preferable to the half-mayonnaise garnish salads you often get with sandwiches.

Garden Court offers four-course prix-fixe dinners every month at under $40 per person. I wasn’t able to make it to September’s special dinner, though its menu looked alluring, hinting at dishes a step up in refinement from omelets and pancakes.

The servers at Garden Court are all very friendly and pleasant, but they do have a tendency to leave you stranded for spans of time that are perhaps five minutes too long. During our Sunday breakfast, for instance, no one came to refill our coffee. But aside from that, Garden Court is a lovely little spot, relaxing and slow-paced with food that’s made to be worth going out of your way–and waiting on a porch with coffee and scones–for.