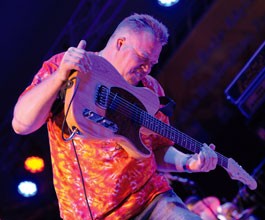 BASICS: Lightnin’ Malcolm found his first guitar with only two strings in ‘a pile of junk.’

While the more sophisticated headliners B. B. King and Buddy Guy get most of the attention at this year’s Russian River Blues Festival, it’ll be Lightnin’ Malcolm, accompanied solely by drummer Cameron Kimbrough, who’ll take the audience to that raw, edgy space where the oldest form of the blues interfaces with the modern world.

Malcolm’s self-composed music is rough, hypnotic and highly percussive. “My guitar is more like a drum with notes,” he says during a phone interview from Mississippi, comparing the effect to house or rave music. “It’s back to the basics. Sometimes it’s just one chord or riff going over and over. If you have the patience, something happens, and it becomes exhilarating. It’s about waiting on the groove to take over, and soon you’re not playing the groove, the groove is playing you.”

Malcolm’s lyrics are sparse, and often sound more like moans than words. “I try to make my vocals go back to those old field-holler days,” he explains. “Sometimes the words don’t matter. It’s the sound.”

Malcolm claims roots in the Mississippi hill-country blues of John Lee Hooker, R. L. Burnside and Junior Kimbrough, and emulates the guitar-drum duo format those men often used. Discussing the advantages of a two-man band—aside from the obvious economic one—Malcolm notes less interpersonal problems. “Some musicians are crazy. Our minds work differently than other people. Also, a two-piece band has this raw, animal instinct to it.”

Malcolm was born in 1974 and grew up in rural Missouri, where he first played along with the radio using sticks from his backyard and, later, an old guitar with two strings he found in a pile of junk. At age 12, he heard his first Muddy Waters song, “Mannish Boy.” “That’s where I really heard the blues and felt that was what life was all about. My life was set right there,” he says.

As a teenager, with his dad gone and his mom working late, he prowled the nightlife, playing guitar at poker games and house parties. Sometimes he played in church, where, Malcolm says, “the old ladies got scared when I played blues. They still believed it was devil music.”

Moving to Mississippi in 1992 to be near his heroes, he met the multi-generational Kimbrough and Burnside families. “I felt at home there,” Malcolm says. “I got along with the old guys. Now I want to pass on their cultural knowledge.” He listened intensely to the hill country blues and the fife and drum music that preceded it, finding the trancelike, tribal nature of these styles to be not only a spiritual experience but, he says, “what I’d been hearing in my head all along.”

After he was introduced to Junior Kimbrough’s 14-year-old grandson, Cameron, the latter joined Malcolm onstage on Memphis’s Beale Street. They clicked, even without prior practice. Twelve years passed without contact until a year ago, when Malcolm chanced upon Cameron practicing guitar in a laundromat. They started playing together again, and the alchemy was still there. “Our two instruments talk to each other,” Malcolm says. “It’s like a drug when we get to playing.”

Malcolm brings to the stage the feel of Mississippi juke joints he’s played, describing them as rustic affairs, where the bar consists of a plywood plank sitting on two sawhorses, with a lady frying chicken, musicians jamming, people sweating and dancing frenetically while drinking corn liquor. “It’s raw and so much fun,” Malcolm says. “Everybody’s loose. Most of the people are having hard times and come to get lost in the music, to calm down and keep from going crazy. It’s a release.

“All I care about is bringing people that release. Blues, when you boil it down to the roots, takes negative energy and makes it positive.”

As to his appearance at the Russian River Blues Festival? Malcolm makes a Southern promise: “We’re gonna be on fire.”