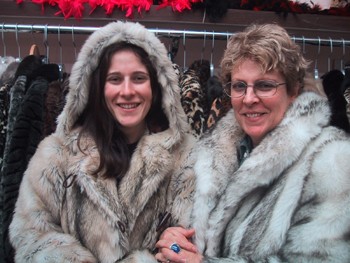 As the fur flies in Guerneville, the middle ground gets harder to find

Guerneville resident Alex Bury distinctly recalls the day her life in this small Russian River resort town changed forever. A conference planner for People for the Ethical Treatment of Animals (PETA), Bury was driving down Guerneville’s main street last November when she passed Kings and Queens, a vintage thrift shop preparing to open. In the store’s display window were three mannequins draped in fur coats.

“I was just shocked,” recalls Bury, a six-year Guerneville resident who formerly owned Sparks vegan restaurant. “It looked like a furrier. It was outrageous.”

The fact that two out of three of the furs in the display were synthetic–as are most of the coats on Kings and Queens’ racks–did little to assuage Bury’s anger. Mixed in with the faux fur was a smattering of vintage mink, wolf, raccoon and mouton coats, most of them made more than 30 years ago. As far as Bury is concerned, they could have been made yesterday.

As a longtime volunteer for PETA and a member of Sonoma People for Animal Rights (SPAR), a local animal-rights group, Bury responded as she has been trained: she wrote a letter, had several of her Guerneville colleagues sign it and delivered it to the store’s owner, Mikki Herman.

“Congratulations on starting a new business,” the letter began. “It is important to us to support small, local businesses–and we just adore shopping at cool vintage places . . . but we cannot support a store that believes it is OK to skin animals alive, without any anesthesia.”

The letter insisted that because Kings and Queens was selling fur–even vintage pieces culled from animals killed decades ago–it “must take responsibility for the gruesome slaughter of baby harp seals going on right now in Canada. Even if you are only buying old furs, you are still marketing for the fur industry, and they will be grateful that a store in Guerneville is helping them kill more animals.”

The letter concluded by presenting Kings and Queens with a choice: “If you will pull the fur from your store, we will be some of your biggest supporters and customers. . . . If you choose to support the needless slaughter of animals for a silly luxury, we will be out front with posters and leaflets showing exactly what happens to animals in the making of fur garments.”

Bury figured the letter would be the end of the issue. “Usually, stores dump furs after just a couple of letters and customer feedback,” Bury says. “I had a lot of hope for the situation. I thought the fur would be gone.”

Bury thought wrong. Kings and Queens owner Herman never answered the letter and refused to stop selling vintage fur. Perhaps more shocking to Bury was that more than a few Guerneville residents, some of whom she considers friends, have turned against her and her cause. When Bury and a dozen SPAR members began picketing Kings and Queens in early December, twice as many counter-protesters showed up, some of them proudly proclaiming a love of meat and fur with their own picket signs as they dined on barbecued meat.

“The reason I live in Guerneville is because I see it as a compassionate and progressive town,” Bury says. “I didn’t know there was this undercurrent. I wish I still didn’t know.”

What’s happening in Guerneville is a battle between two opposing moral claims. The first, PETA and Bury’s, insists that animals are sentient beings with rights, including the right to not be abused and exploited for unnecessary human ends. The opposition’s claim comes straight out of the national religion–capitalism–and states that business owners have the right to buy and sell anything they wish, as long as it is permitted by law.

Mikki Herman never really imagined she’d have to take up the latter argument in her own defense–after all, slaughtering animals in order to make and sell products made from their fur isn’t illegal in most Western countries, including the United States. A 30-year Guerneville resident and mother of four, she had collected vintage clothes for years before opening her store in December. She’s well aware of the fur industry’s documented cruelties and adamantly refuses to buy new fur. However, Herman says it never occurred to her that selling vintage fur, which she considers a form of recycling, might spark a minor rebellion.

“It’s not about fur, it’s about freedom to choose,” she says. “I don’t see this as any worse than reusing a pair of shoes. I’m announcing to Alex Bury that I need no help with my conscience. She’s not my mother.”

With the fur flying over the protest throughout December, rational discourse was often abandoned, with each side accusing the other of various transgressions. Bury, for example, likened the fur industry to the Holocaust, a comparison that rubbed Mikki and her daughter Danila, who are of Jewish decent and lost relatives to the Holocaust, the wrong way. Counter-protesters jeered at Bury and her fellow picketers, calling them “fags,” an epithet more shocking when uttered in the supposedly gay- and lesbian-friendly town of Guerneville. By the beginning of this month, Bury could hardly walk down the street without someone flipping her off.

Shortly before New Year’s, Danila Herman made a series of signs out of pink construction paper and distributed them to local businesses. The signs state, “It’s our choice what we buy, sell, wear and eat.” At least 10 local businesses–roughly half of the town’s commercial community–have pasted them up in their windows.

“I don’t like fur, but I would never tell anyone else what to do. [SPAR] tells us what to wear, what to eat, who to sleep with–it’s like the Taliban or something,” says Valerie Hausman, who works at Memories That Linger, a clothing store that was also picketed by SPAR because it sold rabbit fur scarves.

Jan Pinney, owner and operator of Hemp & Chocolát is sympathetic to Bury’s cause, but has put Herman’s sign up in her window anyway. “I believe that people have a right to a choice,” Pinney says. “I don’t appreciate animals being slaughtered for clothing. But the bottom line is, this is a very small town, and when one business is picketed, we all lose.”

The furor has cast a pall over a town still reeling from Russian River Chamber of Commerce executive director Steve Fogle’s suicide in October and a proposed plan to reduce river flows, potentially threatening the area’s dominant tourist industry. For many business owners, even those sympathetic to the notion of animal rights, Bury’s protest couldn’t have come at a worse time. The fact that Guerneville’s business community may suffer losses does not deter Bury. “I don’t think it’s anything compared to the extremity of animal suffering,” she says. “That’s why I feel comfortable with what I’m doing.”

The fact that fur is a luxury item and not a necessity only heightens the animal suffering for people like Bury. “Fur is so insanely unnecessary,” she says. “No one thinks they have to have fur to get through the day.”

Still, the question remains: Why bring this battle to Guerneville? Several North Bay thrift and vintage stores also report that they sell used fur and have never had a problem. So why the problem in Guerneville?

“We can’t be a microcosm of the world at large, apparently,” says Mikki Herman. “It’s like the Gestapo is in town. What are they going to do to me next?”

In fact, Bury is promising to escalate the conflict even further, with protests planned for the two holiday weekends in February and the annual women’s weekend in May.

“They will not cross picket lines,” she insists of the Bay Area women who traditionally flock to the region for the latter event. Kings and Queens, and perhaps many other Guerneville businesses, will almost undoubtedly lose money because of the controversy. But it’s not too late, Bury says.

“If Mikki decides she wants to talk, we’ll call it off,” she says.

That outcome seems unlikely. Herman says the negative publicity has only helped her business. “The fur is flying off the shelves faster than the faux fur,” she says. Furthermore, Herman intends to stick to her guns. “I will live in a tree and go broke before I give in,” she says.

On a recent overcast afternoon, Alex Bury walks down main street in her muck boots, noting which stores have placed Herman’s pink signs in their windows and waving demurely at the people inside the shops, some of whom were once her friends. She plans to e-mail a list of sign-bearing store names to her SPAR colleagues so they can begin complaining.

“All of us live here because it’s Guerneville,” she says. “I can walk around like this, I can operate a vegan restaurant.”

She sighs. “All of that is gone now.”