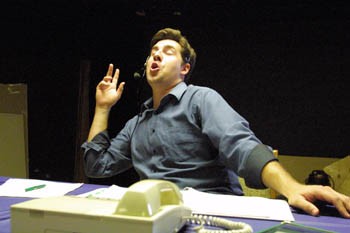 Mystery novel readers encounter it constantly: the locked-room riddle, in which a detective has to figure out how a victim has been strangled, shot, or stabbed while sleeping alone in a secure room. The world of theater offers something similar: the one-person play, in which a single actor alone onstage for 90 minutes or so must figure out how not to kill the show or be murdered by a fickle audience.

But in Fully Committed, now onstage at Actors Theatre in Santa Rosa, actor and director Argo Thompson makes it look so damn easy you wonder what all the fuss is about.

Thompson plays Sam, an out-of-work actor paying the bills by manning the red-hot reservation line of Manhattan’s most popular four-star restaurant. (Thompson took the stage opening night; he alternates with actress Kimberly Kalember during the play’s run.) Thompson also brings to life about 40 other characters, including a great many irritated would-be diners wondering why they can’t get reservations at this exclusive eatery.

“God, Sam, I don’t know how you do it,” a rival actor snidely informs him. “If I had your job, I’d shoot myself.” And suicide does start to seem like a sensible option after the audience gets a taste of Sam’s workday.

Sam’s boss, simply known as “the Chef,” is a celebrated master of global-fusion cuisine. He is also a hilariously over-the-top control freak who delights in humiliating his employees. When a customer gets disgustingly sick in the restaurant bathroom, the Chef forces Sam to clean things up: “It’s not part of your job?” the Chef practically shrieks in disbelief. “Your job is to do whatever I goddamn tell you to do.”

Sam’s co-workers don’t offer relief. Instead of showing up to pitch in, the reservations manager prank-calls Sam and then makes up lousy excuses for running late. Jean-Claude, the extremely French maitre ‘d, alternates between icy imperiousness and very French attempts at humor.

But the biggest cross Sam bears are the customers who call up expecting him to deliver the impossible, the inconceivable, or the incomprehensible. They want a table for this weekend at a restaurant that’s fully booked for the next two months. They wonder how many feet they’ll be sitting from the lighting sconce. They want to know why they should pay $150 for jicama-smoked Scottish wood squab. And they’re willing to beg, bribe, and threaten to get their way: “We’re just two tiny, tiiiiny people,” one Southern belle pleads. “Isn’t there any way you can fit us in?”

Thompson wrangles this array of roles with impressive skill. He’s got great comic timing, a flair for accents, and a highly expressive face and body. The audience can only marvel as it watches him go from playing an 82-year-old woman to an icy New York socialite to the French maitre ‘d to Sam making fun of the maitre ‘d then back to the 82-year-old woman–all in about two minutes.

The play has a well-crafted narrative arch, and there’s rich satisfaction in watching Sam come to terms with the bizarre personalities around him. After all, these characters–psychotic bosses, abusive co-workers, and eccentric customers–are so funny on the stage because people in the audience know how unfunny they can be in real life.