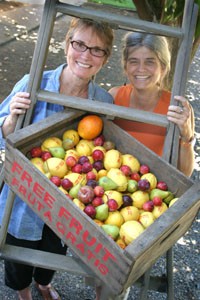 Fruta Gratis and the transient art of fruit

Anyone who has a fruit tree in his or her yard knows its double-edged gift: refreshment and sustenance blossoming just beyond the door vs. the gooey flotsam of smashed, rotten flesh staining the driveway.

The zone of contrast between fruit as a luxury item and as a bothersome surplus is the creative habitat of artists Pam Bolton and Cindy Cleary, who months ago sent an anonymous letter to a handful of North Bay newspapers.

“Do you have fruit trees in your backyard or orchard that produce fruit you don’t have time to pick or eat? Do you ever wish there was someone to pick the fruit and a way to get it to people who could use it?”

The letter concluded with contact information for Free Fruit/Fruta Gratis, described as a “political art-intervention group,” inviting the public to offer fruit for the taking, which Free Fruit would use for one of its installations. Initially, Bolton and Cleary had intended to remain anonymous, but a few of the papers publishing their letter printed their names, so the gig was up.

Cleary, who lives in Guerneville, and Bolton, who lives in Geyserville, have been collaborating for three years. They met while in graduate school at Orinda’s John F. Kennedy University in the department of arts and consciousness.

“We were asked in separate classes to find someone in the class to collaborate with,” Bolton says. “So Cindy and I got together, and because we both lived in Sonoma County, we brainstormed . . . and we realized we both felt this angst about the fruit orchards that had been pulled out everywhere in the county. And [then] the glut of vineyards.”

Something Bolton heard over the radio was one of the initial sparks for Free Fruit. “I was coming back from Berkeley listening to KPFA, and there was an interview with a young man who said, ‘My folks never had enough money to buy fruit. We never had fresh fruit.’ And to think of not having fresh fruit–it’s so astounding. Why are we not feeding ourselves? Why are there any people hungry when there’s abundance?”

The duo’s first action was to save fruit seeds and send them out to a random mailing of 33 people, “mostly by virtue of them having their address be Forestville or Orchard Lane or something to do with growth,” Bolton says. “Thirty-three is a very powerful number–because of all our actions, we’ve kind of engaged the mystery, the elements, the planets.”

Their first actual installation was to put bare-root fruit trees out on the side of the road, along with a sign reading “Fruta Gratis” and handouts with information about how to plant the trees. “We put them in places where migrant workers hang out, we put one near New College,” Bolton says. They revisited those sites for following installations, next giving away fruit recycled from the Cloverdale Citrus Fair.

Free Fruit installations are minimal but attention-grabbing. The artists pile donated fruit–some misshapen and gimpy, but all naturally Crayola-bright–in wooden fruit boxes marked with a “Free Fruit/Fruta Gratis” sign, and set out a stack of paper bags so passers-by can take up the offer.

And then there are the handouts: orange, green, and yellow slips of paper with typewritten musings on local agricultural heritage or writings by Pablo Neruda. But otherwise, it’s just the viewer and the fruit. “We usually put a poem out where we leave our fruit–it’s kind of simple and straightforward, and not a lot of language attached to it,” Cleary says.

All of the fruit is marked with the Free Fruit stamp, a red “Sunkist”-like emblem that winks at our numbness to branding and marketing. The bags are stamped too, so if a person got the fruit secondhand and didn’t know where it came from, perhaps he or she would think Free Fruit was a new produce company.

When Bolton and Cleary did their first installation with the fruit trees, they stayed and watched, something they have mixed feelings about. “We stood back, but we took field notes and photographs,” says Bolton. “We also felt like it took something away from it, because we ended up being the ones in the know. We were being like the scientists. And it’s kind of nice to have the unknown be part of it. Those people who are coming are part of the art and the collaboration.”

And–outside of giving away fruit–the mystery is the fun part. The fruit goes fast once it’s out; people love free things. It stirs their curiosity, but it also stirs the artists’ curiosity: What happens to the fruit once it leaves, and who is it going home with? Do those taking fruit come from big families? Will they sell the fruit? Will they make marmalade? Do they share with their neighbors?

Cleary cites the artists’ detachment from the installations once they are erected as a vital element to the art itself. “At each place, eventually somebody either took the whole crate or dumped the crate into the back of a truck or car. And having that be fine–that person was going to do something with the fruit.”

Even though Free Fruit’s actions and intentions are noble and helpful, they are not a full-scale organization to fight hunger or promote sustainability. The simplicity inherent in the approach is the whole point–that we, too, can make this happen. We all give away; we all, at some point, take; and we can facilitate other people’s giving and taking.

“We haven’t done it with the intention of solving some problem, but with identifying something that’s disturbing to us and then having people wonder,” says Bolton. “That’s exactly what we wanted. And also, we’ve had a lot of possibilities. Communities could come up with maps where there’s free fruit and . . . figure out how to get that backyard fruit that somebody can’t get anymore to people who could eat it.”

“One of the things we’re hoping is that we can be a conduit between the people who want the fruit or need the fruit and the people who have the fruit,” Cleary says. “We’ve gotten so many phone calls from people who say, ‘I have one tree, [or] I have a hundred trees,’ and organizations who are doing similar kind of work with food or hunger, wanting to know if there’s a way that we could connect. I really didn’t think we’d have much response. I don’t know why I didn’t trust that other people were feeling the same way we were.”

Both Cleary and Bolton do individual projects using natural materials. Cleary’s been working with fruit and fruit juices on large-scale pieces of mulberry paper, “to see what the fruit has and what it can feel like, what it wants to be,” she says. “I really got to know the character of each fruit–how it goes on the paper, what’s really inside of it.”

Bolton, who’s also a spiritual counselor, looks to her home for inspiration. “I’ve really felt called to use natural materials from the land where I’ve lived for 25 years. And I really feel we need to have a reverence again for nature and connect with art, have the artist remembering for us that reverence we need.”

The next step Cleary and Bolton want to take the project in is still unclear, but that’s because there are so many possibilities. “We’ve talked about the project like throwing a stone into a pond and watching the ripples move out, seeing how it touches other people, and what that brings,” says Cleary. The idea of collecting oral histories of farmers on tape has come up, as has the concept of setting up Free Fruit/Fruta Gratis as a model for other communities.

“Free Fruit across America,” laughs Bolton. “We’re definitely going to continue to be playful in that sense with it. And to make public installations.”

“I think the playfulness and the magic are the two key words that enliven a really serious subject,” Cleary adds.

“And maybe excite . . . or interest [people] in coming up with creative thoughts, just stimulate that creative thinking,” Bolton continues. “There is abundance; there is enough for all of us. It’s just a matter of understanding that.”