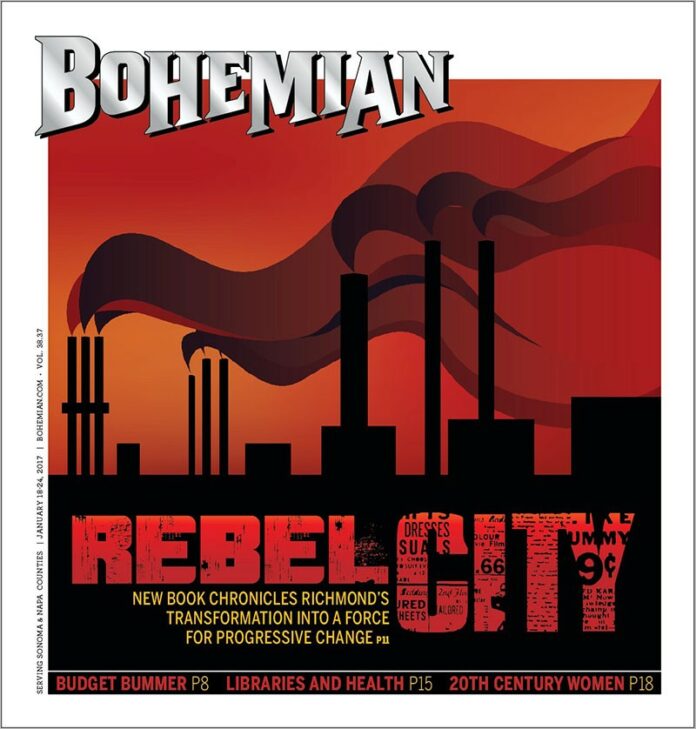 From Company Town to Rebel City

Richmond shows how progressives can win

Rebel cities have long been laboratories for progressive policy experimentation. Specifically, the small Bay Area city of Richmond has stood out for its boldness. It’s now the subject of a new book by Steve Early, Refinery Town: Big Oil, Big Money, and the Remaking of an American City.

A long-time labor activist
and a frequent writer for
In These Times, Early moved to Richmond five years ago. After “thirty-two Boston-area winters,” Early found the placid weather more of a draw than the city’s vibrant urban-reform movement, he writes. But naturally he soon got involved and began taking notes, eventually producing a lively read—an intimate, warts-and-all look at how a small
band of activists fought for
and won a slightly better world at home.

Early’s book is a ray of hope for anyone wondering how to survive, and possibly even thrive, under Donald Trump and a hostile Republican Congress.

Richmond was once home to factories that built warships and automobiles. Today, what’s left of local industry is a giant oil refinery owned by global superpower Chevron. The de-industrialization of Richmond produced the usual urban problems: white flight, declining tax revenue, a corrupt government and a police force that behaved like an occupying army.

In 2004, an “unlikely group of Greens, Latinos, progressive Democrats, African Americans, and free spirits” formed the Richmond Progressive Alliance (RPA), and began to organize around environmental and good-government causes. It grew into a political machine.

Party labels don’t appear on Richmond city ballots, and all city council seats are elected on a citywide basis—a structure that’s advantageous for insurgent minority efforts to gain representation and build a reputation in government.

In its first election, the RPA managed to win a city council seat for Gayle McLaughlin, a Green. As councilwoman, McLaughlin championed city parks and pushed for more environmental regulation of the refinery. Two years later, she was elected mayor.

McLaughlin hired a good government city manager, who straightened out the city’s books, as well as a new police chief who retrained the city’s force to emphasize community relations and de-escalation.

The alliance also fought to make Chevron pay its fair share in taxes, eventually extracting an additional $114 million from the company. It helped negotiate a separate $90 million payout, along with new safety regulations and investments for the plant. In turn, that money was invested in parks, youth jobs programs and expansion of the city’s workforce and services.

In spite of such successes, the RPA found itself under regular attack. Its members skewed older and whiter than Richmond’s diverse population. Machine Democrats exploited this fact by running African-American opponents against RPA-supported candidates. These hacks were routinely endorsed by state Democratic leaders like Dianne Feinstein, out of party loyalty. In a dynamic familiar to anyone who labors in urban union politics, the building trades and police and fire unions also opposed the progressive alliance.

Finally, and least surprisingly, Chevron spent $3.1 million in an unsuccessful effort to defeat the RPA slate in 2014. To put that in perspective, that’s more money than the company spent on every congressional race in the country for two cycles—combined!

From Protest to Policy-Making

Richmond progressives also faced intense opposition from powerful real estate interests. The city made national headlines with its Richmond Cares plan to use its powers of eminent domain to help homeowners whose loans exceeded the values of their homes in the wake of the mortgage crisis and Great Recession that followed.

“The banking and real estate industries,” writes Early, “wanted to strangle Richmond Cares in the cradle before it could become a model and precedent for other cities.”

Corporate interests sued to block implementation, and inundated the local airwaves with broadsides against the mayor and progressive councilmembers. In essence, the banks threatened a capital strike, warning that “lending for new home buyers will dry up, home values will decline, and neighborhoods will be hurt,” Early writes. Ultimately, the mortgage industry successfully lobbied Congress to prevent the use of eminent domain to renegotiate private mortgages. Such a bill was signed into law by President Obama in late 2014.

Efforts to provide relief for Richmond renters were more successful, although no less contested. Located just 17 miles from San Francisco and connected by a train line, Richmond has seen an influx of new residents priced out of more expensive cities to its south. Newcomers were soon pricing out longtime Richmond residents, as rents were raised by hundreds of dollars a month, with no warning. Evictions spiked.

In July 2015, the city passed a package of rent-control measures. They established a rent-control board, capped annual rent increases to the federal inflation rate and established a “just cause” standard for evictions. The California landlord lobby responded by paying canvassers to mislead several thousand Richmond voters into forcing a referendum on the law. Although Early’s book went to press before the November election, the happy postscript is that Richmond’s rent-control law was one of the many progressive ballot initiatives that won.

The rent-control battle exposed a deepening rift between the RPA and the new mayor, Tom Butt. Butt, whom the alliance backed at the end of McLaughlin’s two terms, favored a “supply side” solution to the city’s housing crunch and bitterly walked out on the council’s rent vote.

These kinds of political growing pains are being experienced in almost every city where progressive coalitions have won more power in city hall. In the transition from protest to policy-making, alliances contend with the rising expectations of left voters, on the one hand, and the dawning reality, on the other hand, that liberal allies may only be along for part of the ride.

‘What a little group of people could accomplish’

Appropriately, Refinery Town includes a foreword by Bernie Sanders. Before he became the
de facto opposition leader against Trump, Sanders gave hope to a beleaguered and much tinier left during the Ronald Reagan years, as mayor of the small Vermont city of Burlington. He’s now working with Our Revolution, the national organization that spun off from Sanders’ recent run for the presidency, and is focused on the recruitment and training of local activists for down-ballot races.

Community activists who are just starting out could find the Richmond example a bit daunting, which makes intimate, contemporary histories like Refinery Town so valuable. The first step, of course, is to find each other. The activists who would go on to form the Richmond Progressive Alliance first coalesced around a successful effort to block construction of an oil-fueled municipal power plant next to the Chevron refinery.

The next project they worked on was a year-long campaign to stop the police from harassing Latino day laborers at their morning meet-up spot outside a local Home Depot. This campaign was also a success, and led to the creation of a day-laborer association to improve safety and workers’ wages.

As Early writes, one founder recalled that organizing around these discrete winnable issues “showed what a little group of people could accomplish,” and inspired the shift into electoral work.

This story originally appeared in
‘In These Times.’