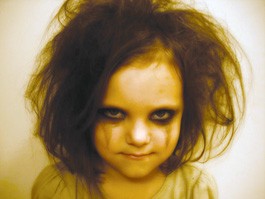 In the theater world, whenever an actor says “It’s curtains,” the word usually signals the imminent demise of whomever they are swapping dialogue with. When John DeGaetano, the director of the Raven Players’ upcoming Halloween-weekend Monster Bash, says “It’s curtains,” he is giving the specific reason for the popular annual variety show.

“The Raven Theater needs curtains for the stage,” he laughs. “And heavy-duty curtains aren’t cheap.” Twelve thousand dollars, to be exact. The hope is that much of that cost will be raised by singing, dancing and joke-cracking monsters. Last year’s debut of the Monster Bash (which included a staged recreation of Orson Welles’ famous War of the Worlds radio telecast) was so successful that it was immediately obvious that the show would be an annual occurrence. This year’s program, however, without the radio show in the second act, will be able to feature twice as many performers.

“We’ve got 16 separate performances,” says DeGaetano, who directs and appears onstage throughout the show. “I can’t really tell you what any of the acts are or what they’re made of, because the thing about the Monster Bash is that everything is a surprise. What happens from act to act is a surprise—and who those performers turn out to be is a surprise. All I can say is that we’ve got a lot of very recognizable people in the show, most of them actors and singers who’ve been performing on stages all over the North Bay.

“That’s really all I can tell you,” he continues. “Secrecy is extremely important because, well, I can’t tell you why, because that would spoil it. I can say that every act has a Halloween theme, and that we selected these 16 acts from more than 30 submissions. I can tell you that one of the acts is a repeat of something that was very popular last year—but I may have already said too much.”

OK, then. Unsubstantiated rumors have it that the “repeat performance” may be an enormous, colorful, unleashing of Michael Jackson’s Thriller, with a horde of zombie dancers in full creep-show array. DeGaetano neither confirms nor denies this, but does admit that zombies may have been seen rehearsing dance moves in and around the Raven Theater over the last few weeks. DeGaetano also confesses that some recognizable horror-show faces will likely make an appearance.

“We do a little bit of a tribute to several of our horror-movie-type stars,” he says, “horror-movie icons who’ve been out there for years, and everyone has grown up with. But it’s a family show. There’s nothing too scary.

“The idea behind the show was to create a slightly scary version of a community talent show. The full variety show reflects a range of what the North Bay has to offer. Some of the acts are by professionals, and some are by less experienced people who just had a really fun idea of what they wanted to present. Are some of these acts somewhat questionable? Yes. Let’s just say we have put together a show with a lot of range.

“Halloween,” he continues, “is such a wonderful time of year. There’s something about it that is just inherently theatrical. I go way back with Halloween. When I was in college in Ohio, way back when, some friends and I put together a Halloween-themed musical act, and we ran the circuit of Halloween parties, with talent contests, and we won money all over town with that act. That may have been part of the inspiration for the Monster Bash. I think there’s always room for outrageousness, and everybody needs an opportunity to show what they can do. Based on last year’s turnout, I think that there’s a desire in the community to see what our friends and neighbors are up to.”

It’s simply added value that some of those friends and neighbors will be dressed like the walking undead.