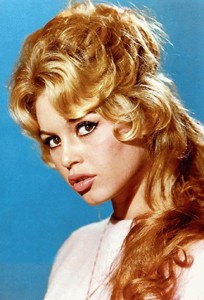 French pop music stalks the fringes of my listening habits like a bratty sex kitten from one of those steamy 1960s Roger Vadim flicks. This often flirtatious music, especially the twee ’60s-era sound known as “yé-yé,” is one of my guilty pleasures. (One of my most valued possessions is a Brigitte Bardot vinyl picture disc emblazoned with an image of the blonde cinema goddess, her bedroom eyes heavy with mascara.) Now my guilt is rendered all the more pleasurable with the recent release of actress and singer Julie Delpy’s contributions to the Before Sunset soundtrack (shades of Claudine Longet), Pink Martini’s Sympathique, the jazzy Paris Combo CD Motifs and a bevy of new compilations.

But who needs an excuse to listen to silver-screen siren Bardot cooing a faux-bossa ballad from one of her many pop albums?

This lust for all songs French reached a fever pitch last fall, not through the ill-fated presidential candidacy of Francophile politico John Kerry, but with the release of the excellent two-volume Sunnyside Café CD set, Pop à Paris: Rock n’ Roll and Mini Skirts and Pop à Paris: More Rock n’ Roll and Mini Skirts, both on the Universal-distributed Sunnyside label. It’s the perfect starter kit for those seeking to sample the sassy waters of French pop–and it’s a load of fun.

If Pop à Paris whets your appetite, check out these other compilations, including several recommendations from the excellent Slipcue e-zine French pop guide (www.slipcue.com). Slipcue is a totally reliable source compiled by KALX DJ Joe Sixpack that has served me well when deciding whether or not to plunk down $25 for an import copy of Jacques Dutronc’s Beatles-esque musings or some other soundtrack from Francelandia.

‘Ultra Chicks’ They’re all here, including Jacqueline Taieb, on this multivolume series of teen-crazed yé-yé retrospectives titled Lolita, Baby Pop, Ya Ya! and so on. Power pop and Tuesday Weld (what’s she doing here!?)–how can you go wrong?

‘Swinging Mademoiselle’ Everything from yé-yé to psychedelia on two volumes, with some crossover with the Ultra Chicks collection, but totally enjoyable.

‘The Rough Guide to the Music of France’ This is a refreshingly broad survey of French pop. The ubiquitous Edith Piaf makes an appearance, but you also get folk star Gabriel Yacoub and some very interesting pop, rock, jazz and world crossover artists (like the Masilia Sound System) who have helped reshape the definition of French music in the past few decades.

‘Psychegaelic: French Freakbeat’ A rare bootleg compilation that explores the mid-1960s mod-influenced psychedelia of French bands that were paying strict attention to their British brethren, most notably Small Faces and Cream.

‘Cuisine Non-Stop: Introduction to the French Nouvelle Generation’ This 2002 entry from David Byrne’s globe-tripping Luaka Bop label explores the multiculti side of French pop with tracks by Lo’Jo and such obscure artists as Mickey 3D and Ignatus.

‘Killed by Death 200: Rare Punque Francais, ’77-’83’ So the French can’t rock, huh? Fix your ears to this set of melodic Gallic punk and hardcore.

‘The Best of Brigitte Bardot’ Ah yes, BB, the ultimate yé-yé girl. This 2004 compilation is rife with light pop (“Bubble Gum” and “Comic Strip”) that doesn’t necessarily rank among her best but has plenty of playful kittenish vocals, and it includes tracks that didn’t even land on the three-CD BB box set a few years back. You’ll be humming “Le Diable est Anglais” in no time. The CD cover alone is worth the price of admission: no one could wear a leather micro-mini and thigh-high boots like Bardot.