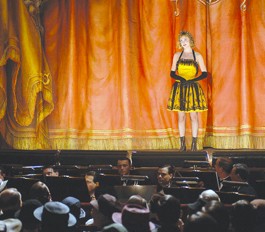 A bald, plump, meek little man named Pigoil (Gérard Jugnot) turns himself in to the coppers for murder. They ask him where he’s from. The Faubourg, he replies. “Which Faubourg?” the cop asks: “The Faubourg,” Pigoil answers. And Paris 36 unfolds in a working-class fantasyland, an imaginary quartier of Paris held down by the peeling old Chansonia Theater.

In France, 1936 was a year of economic depression and political strife. I had a history teacher who claimed that Leon Blum’s premiership, along with Woodrow Wilson’s presidency, was proof that teachers should never lead countries. Still, Blum’s shaky, left-wing coalition government brought in the 40-hour week and two weeks annual vacation, as well as a brief interlude of peace before France fell to fascism.

This busy, badly edited, graceless musical has a heady background. It also has a huge inventory of traditional music-hall tunes from the 1930s that it could have used, and didn’t. Paris 36 does have some elements you can sink into: photographer Tom Stern’s rich color and the golden gleam of its female star, Nora Arnezeder, who plays a novice singer called “Douce” (“Sweet”). But director Christophe Barratier’s camera sets some kind of record for being in the wrong place at the wrong time. In Czechoslovakia, technicians built an ambitious set to look like Paris back when it was Paris. Consistently, Barratier makes sure you can’t see it.

The plot follows the actors and stagehands making a co-op out of the shuttered Chansonia. Though they get it up and running, the workers are unable to escape the shadow of the wealthy thug landlord Galpiat (Bernard-Pierre Donnadieu), who is connected to high-powered fascist circles. This heavy has also appointed himself as a “protector” to Douce. Douce’s true love is the stage manager, Milou (Clovis Cornillac), a socialist organizer who can’t keep Douce in the style to which she would like to be accustomed.

As for Pigoil, he has lost custody of his beloved son, Jojo (Maxence Perrin), a musette whiz. In Joe Bob Briggs’ phrase, here is a plot that gets in the way of the story. The musical scenes start up and are brutally curtailed in midsong, and then there’s yet another bad cut to one of the less interesting subplots. The theater goes out of business one too many times. Douce herself doesn’t show up until a half-hour after the film begins, and she doesn’t really get a chance to shine until her last number, a death ballad called “Entérée Sous le Bal.”

One wonders if there’s as much old-burlesque and vaudeville revivalism in France as there is in the United States—if there were performers who could have been used for this film. Kad Merad’s Jacky, who holds down one arc of the film, does dreadful imitations before he finds a spot as a rapid-patter-song specialist. Then you need to wonder why it took so long to establish that Jacky had a hidden talent, after suffering through his lousy stage act. We see so much more of his terrible bird calls than we do of the singers who seem to have talent. The film’s wrong-foot-forward approach never fails, right up to the Stella Dallas ending.