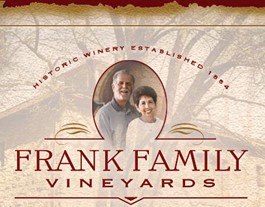 Touristy Napa Valley has been long been tagged with the epithet “wine Disneyland.” Ironic that when a Disney bigwig imagineered his own Napa winery, the result is a surprisingly no-frills experience modeled on the Napa of old.

As president of Disney Studios, Rich Frank oversaw such hits as Aladdin and The Lion King; no doubt, he’s tight with the Mouse. In 1990, all he wanted out of Napa was a weekend retreat, until a bottle of Rombauer Chardonnay began his enchantment. Sagely advised to keep his day job, Frank nevertheless purchased a rustic estate and began to grow a brand that exalts not the owner, but the historic Larkmead winery, the wine and, natch, the guest.

The original tasting room was in a dilapidated house so funky that everyone who describes it references a different era from 1920s bungalow to 1960s government office. Yet it was apparently a much-loved destination, and a top 10 recommendation in the wine glossies. It was demolished in 2008, and tasting was moved to the property’s newly remodeled craftsman farmhouse.

When I walked in, straightaway I was offered a complementary glass of sparkling Blanc de Noirs ($35). Pleasantly diverted by flavors of baked apple, pear and toasty-yeasty aromatics, I had a look around. The big old farmhouse rooms are furnished with a few curiosities from bygone days of wine and film, with a bar to each room. This, I was told, is so that no guest is found wanting behind a three-deep crowd. On my way past the bubbly bar, I was handed a flute of 1997 Signature Brut ($65). The bartender leaned easily back on his stool and crooned a few lines of a Rat Pack tune to no one in particular.

When I finally landed at a bar, it was actually tasting-room manager Dennis Zablosky’s desk. Back in the old shack, visitors became acquainted with the wryly amiable Napa native while squeezing through his office, situated as it was between two cramped tasting areas. A wall plastered with snapshots of visitors cheerfully sandwiching him attests to his rep as tasting-room legend. Even in Zablosky’s spacious new digs, of course, wayfarers old and new are welcome.

Another reason that people feel the love for this place: Frank’s no-fee tasting policy. It’s all free, from the bubbly welcome to the last complex and juicy sip of 2005 Napa Valley Cabernet Sauvignon ($45). Surely, that’s only because the movie mogul can afford such magnanimity? That was my thought, too—but the publicist swears that the winery operates on cash wine sales. Who would have thought that in Napa you could get by on charm and good wine alone?