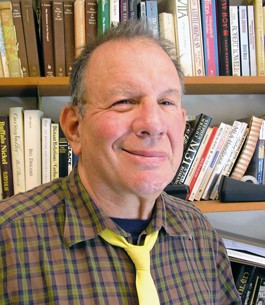 Is he a radical, a Beat, a historian or a farmer?

Photograph by Daniel Raskin
PROF: Jonah Raskin has been at SSU since 1981.

Jonah Raskin has had a long and impressive career, and it shows no signs of ebbing. The 67-year-old communications professor  at Sonoma State University has published countless essays and reviews, as well as more than a dozen books. Beginning with the 1971 literary study The Mythology of Imperialism, Raskin has given himself a long series of hearty projects that have resulted in important books on Allen Ginsberg, Abbie Hoffman and, most recently, Jack London.

For my money, Raskin deserves canonization, if only for his extraordinary, sleuthlike 1980 biography My Search for B. Traven, which tracks the ghost of the elusive Traven, author of The Treasure of the Sierra Madre, throughout Mexico. Traven spent his last years in Mexico, and retains legendary status there; cab drivers amaze Raskin by quoting his lines.

After weaving his way through a wide circle of former Traven intimates in Mexico City, Raskin gets an invitation from his widow, Rosa Elena, to stay in her house, and there, surrounded by a lifetime of the author’s artifacts, he writes the biography. Raskin begins to lose his grip as he channels Traven. In a remarkable scene, Raskin dons the dead man’s clothes and glasses, and begins to wonder who he is.

In 2007, the book was translated into French (Á la Recherche de B. Traven) and published in France. Raskin, brought over for a series of readings, was delighted to encounter enthusiastic crowds in bookstores around France, where B. Traven is taken at least as seriously as Jerry Lewis. After every appearance, young people took Raskin out to drink and discuss the book further. It was the kind of reception he’s never had in this country.

In May, Raskin publishes a new book, Field Days: A Year of Farming, Eating, and Drinking in California, with University of California Press. The book provides a rich history of Northern California agriculture and features portraits of local luminaries from General Mariano Vallejo and Luther Burbank to M. F. K. Fisher and some of the latter-day pioneers of organic farming. Field Days also offers a personal account of Raskin’s year spent meeting local farmers, working in their fields and bringing produce to market.

When I ask Raskin to describe the arc of his career, he flashes me his gonif grin and says, “It’s been all downhill.” He explains that his journalism career began at age 15, writing high school sports for The Long Islander, the weekly newspaper founded by Walt Whitman in Huntington, Long Island. “Hard to top that.”

Raskin, who was co-captain of his high school football team and made Newsday‘s All-Suffolk County team in 1958, had his breakthrough in journalism when he wrote about the halftime goings-on at a game he played in. “Everybody loved the piece,” Raskin remembers.

But Raskin scoffs when I suggest that it was maybe he who invented New Journalism, the brand of participatory journalism associated with Hunter S. Thompson, Norman Mailer, and Tom Wolfe. “No,” he says, “Jack London was writing that stuff decades earlier.”

After his high school glories, Raskin chose to attend Columbia University, not for football but because that is where his Beat heroes, Jack Kerouac and Allen Ginsberg, went to college. After receiving his MA in American literature, Raskin moved to England and studied English and American literature at the University of Manchester.

Raskin’s first university teaching job was at the State University of New York, at Stony Brook, where he taught English lit. While on the faculty at Stony Brook, Raskin became involved in radical politics. He participated with Students for a Democratic Society in the occupation of Columbia University in 1968, and in 1970 had become Minister of Education for the Youth International Party (Yippies), whose co-members included Abbie Hoffman, Jerry Rubin and Paul Krassner.

Denied tenure at Stony Brook because of his militant activities, Raskin became, in his words, “a radical freelance journalist,” living on book advances and fees from articles and reviews.

In 1981, Raskin joined the SSU faculty, where he’s been the chair of communications studies since 1988. He especially enjoys teaching media law, a lecture course. When he describes the class to me, he gets that gonif grin back on his mug.