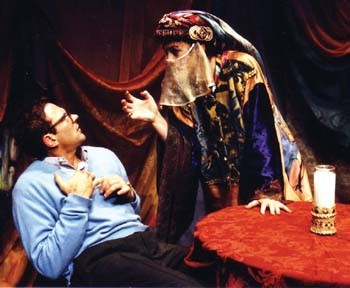 The undisputed hit of Marin Theatre Company’s 2003-2004 season was The Last Schwartz, by New York playwright Deborah Zoe Laufer. A dark comedy about astronomy, furniture and family dysfunction, the play struck a deep chord with Bay Area audiences, and instantly established Laufer as a new “best favorite” at MTC.

The Marin Theatre Company is currently staging Fortune, Laufer’s new two-person romantic comedy, in its world premiere. A far different play than Schwartz, this one is lighter and sillier, deliriously contrived in its set-up and plot.

Nevertheless, Fortune, energetically directed by MTC executive director Lee Sankowich, carries all of the elements that Laufer’s expanding corps of devotees love her for: blunt, beautiful, funny dialogue; an empathic insight into the aches, conflicts and dreams that make us human; a knack for revealing the hidden significance of our most trivial and foolhardy impulses; and a bold, death-defying willingness to face the awful truth and still wrap things up on a note of sweetness and hope.

Hope, it seems, has abandoned the melancholy Maude (Julia Brothers in a remarkable and agile performance), a lonely storefront psychic who hides her emotional fragility, literally and figuratively, behind a veil. Her clients never see her face, and she adopts a Russian-accented, Garbo-toned voice whenever conducting business in her gauze-draped parlor. The last in a long line of female fortunetellers, all with a reputation for never being wrong, Maude has reluctantly accepted that love is not in the cards for her. Such is her destiny, as foretold by her long-absent mother, who must have been in a bad mood the day she saddled her daughter with that one.

Having given up on love, Maude has grown surly, fed up with looking into other people’s futures, impatient that those with more promising fates have wasted their time worrying about petty details instead of living the fullness of their lives. Fate is something that the cynical Maude very much believes in.

“This is America!” she exclaims at one point. “You are free to live whatever life you choose–within your socioeconomic limits and predetermined destiny.” Her life changes when she takes a new client, Jeremy (Darren Bridgett), a despondent accountant who is hungry for evidence that somewhere in the world there is a woman who could love him. An awkward, geeky sort of guy, Jeremy is not the type to attract a lot of attention from the opposite sex, and his visit to Maude is clearly the poor fellow’s last grab at hope, a desperate attempt to find a reason not to kill himself.

Maude sees that he will kill himself, however, and soon.

Against character, she lies. Attempting, perhaps, to change Jeremy’s destiny, with no hope of achieving anything, she tells him he’s about to meet his red-headed soul mate, and thus sets up the course of the play, in which she is pulled deeper and deeper into her deception, ultimately disguising herself as a series of red-wigged modern archetypes–a nervous secretary, a flirtatious bombshell, a pushy biker chick–to “accidentally” meet and interact with the gradually blossoming Jeremy.

Where all of this is going is obvious, of course. By attempting to change this lonely man’s future, the fortuneteller will end up changing her own, after a number of false turns and one or two legitimate surprises.

The real magic here is in the performances of Brothers and Bridgett. As their downbeaten losers begin to see glimmers of hope, gradually believing that love and happiness might really be possible after all, it’s impossible not to believe it right along with them.