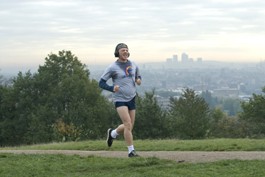 T he story of David Schwimmer’s Run Fat Boy Run is sturdy and old-timey, with a healthy balance of high and low humor, though it does go quite low. Here is the principal laugh-getter of 2008: the display of a spongy-bottomed man in bun-huggers. So is a new variation of the old pie in the face, using a half-quart of bodily fluid. Underneath the crowd-pleasing gunk is a sturdy plot, though. Almost any well-built comedy of today will turn out to have the same structure as a good silent movie, and the 1926 Harry Langdon comedy Tramp Tramp Tramp might make a good double bill with Run Fat Boy Run .

Dennis (co-writer Simon Pegg, recently of Hot Fuzz and Shaun of the Dead ) was a runaway groom at his wedding to the visibly pregnant Libby (Thandie Newton). He has had five years to regret his weakness. Now a pot-bellied slob who works as a security guard at a lingerie shop, he lives in a flat surrounded by beer bottles. When he comes to pick up his son, Jake (Matthew Fenton), Libby hints of a new man in her life. He’s Whit (Hank Azaria), a rich and insufferable American businessman who is preparing to run in a 26-mile Nike River Run marathon through London.

Dennis, who claims “I’m not fat, I’m unfit,” decides to show Whit up and prove to Libby he can start something he’ll finish. He’s coached in this epic athletic event by his portly landlord Mr. Ghoshdashtidar (Harish Patel), as well as his best friend (and Libby’s cousin), the decadent Gordon (Dylan Moran). The latter has indebted himself heavily in a bet that Dennis will make the finish line.

Seeing The Bank Job a top-notch heist film set in 1970, it occurred to me what I liked most about the film was seeing so much of London. Like The Bank Job , and like Shaun of the Dead, Run Fat Boy Run is a film that insists on the stalwart nature of brick walls, cigs, pints and baked beans for breakfast. Pegg’s Dennis is a nostalgist, with a collection of T-shirts from bands of the early ’80s. His cinema is almost as besotted about the old London as Jacques Tati was about the old Paris.

Azaria’s Ralph Bellamy-ing is prime; his camel-like face is supplemented with a computer-supplied hard body to flaunt in the gym. Having complimented Azaria, I have to add a love letter to standup comic Dylan Moran, an Irish comedian also featured in Shaun of the Dead , who is not as well-known in America as he needs to be. He is a crouching, furtive party with the black tousled fur of a canal-drowned cat. A dangling cigarette complements the customary snarl, a snarl that changes to a hyena’s smirk of beguilement when he wants something. In Moran’s voice, the almost musical sarcasm of James Mason meets the bray of an affronted German officer.

On the BBC, Moran invented and played Bernard Black, wine-darkened proprietor of Black Books , a dank bookstore decaying into a compost heap. In one episode, the shop even drew snails. During three seasons of the show, Moran went where no one but John Cleese had gone before him, in showing cowardice, spleen, wrath and the sensible desire to not be pestered by anything good, clean or decent.

Moran is perhaps a little softer in Run Fat Boy Run , in one moment giving up his Rolex to help out his good friend Dennis. Fortunately, Gordon also tries to knock some sense into Dennis with a fistfight, a rather inept slapping contest that plays like a pair of differently-abled children trying to give each other pink-bellies.

Schwimmer’s direction isn’t as light-footed as his cast, but he’s strong on the plot points, and that helps more than it seems. He insists on the logic of the story and makes sure that the reason why Dennis ran away—and the reason why Libby might be willing to forgive—are worked out. The attention to structure allows the comedians to go wild, and the romantic comedy makes a harmonious blend with the slapstick.