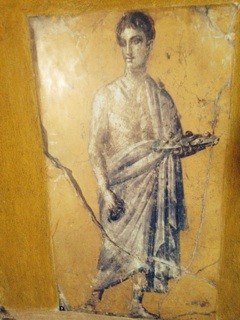 Food and Wine Odyssey: Anchors Away

This is first of a series of sponsored posts documenting Bohemian and Pacific Sun publisher Rosemary Olson’s wine and food cruise around Italy and Croatia with Duckhorn Vineyards and Food & Wine Trails.

Our ship, Oceania Cruise’s Riviera sets sail from Rome. I’m traveling solo and I walked into the first evening at a private Duckhorn Vineyards reception from not knowing anyone on the ship to meeting 100 eager travel companions. We range in age from 30 on up and come from across the U.S. Walking into the room and being able to make a connection with complete strangers is fascinating. We all quickly see the thread of our love for good wine and food. Alex Ryan, Duckhorn’s president and CEO, says his wines “celebrate life and new stories.” So off we go.

Our first day is all about Roman history and we tour the vineyards of Vesuvius guided by Piera owner of Vin Viaggiana. She is a history buff who has been giving tours since 2001. She is full of humor and spunk. She is also a celebrated sommelier who works exclusively with Food & Wine Trails.

I sit in the front of the bus next to Piera to get much more insight and stories. She’s married to a Scot. She says she’s shocked how much beer Scots drink vs the volumes of wine Italians drink. Sitting in the first seat behind the driver, I see the hairpin turns we are making, nearly gasping at each turn while nearly skimming the scooter riders with no helmets.

In the Campania region, we explored ancient Stabiae, one of only seven Roman villas buried by volcanic ash by Mount Vesuvius. The ruins were excavated twice. The first time many of the mosaics, frescoes and statues were looted. It’s astonishing how much skill and time that went into the interior murals and frescoes. Inside we saw an underground thermal bath. It’s believed that slaves went through tunnels 24 hours a day to keep fires hot to warm the baths. I will appreciate my hot tub even more!

Venturing through the towns of Pompeii up to a winery for a tour and lunch, we saw the local produce of lemons (home of the famous limoncello which I now know how to make), oranges, olives and walnuts in abundance. Tomatoes originated from Christopher Columbus which surprised me and the olive trees from Greeks which makes sense. Farmers once came down the mountains in cloaks carrying cheese, earning it the name ‘monks cheese.’ Nearby Grananio is known for its dried pasta. It was once dried in the streets by young boys hand fanning it. Speaking of fanning, the temperature is abnormally hot, we felt like we were literally baking under the sun needing fanning ourselves!

Finally, we arrived at the Sorrentino Family Vineyard. Zio Antonio greets us at the driveway with an eager smile. He was the classic Italian we were waiting for, hugging and kissing, flirting with the woman, engaging in fun with the men. He was the master wine pourer, a few glasses for us, the rest for him as he’d tilt his head back and down the final pours! Every time he did this, about 20, he became more lively. Wine at the five-generation old vineyard is 100 percent organic. Grapes are grown in volcanic soil which reportedly gives the grapes a higher sugar content which is my preference along with higher alcohol levels in more full-bodied reds. California’s reds like Cab and Zin are higher in alcohol than Italy’s heartier reds.

Back in the days of Roman Empire, we learned, wine was with honey, saltwater or sap. Locals say this added to their feisty gatherings and uproars…was this a preservative?

Ciao until next time.