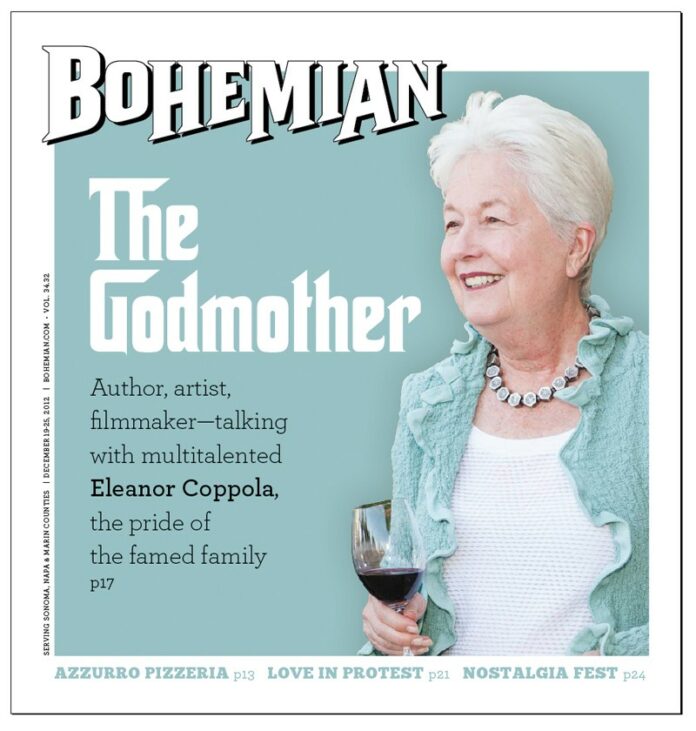 Following Her Own Star

Eleanor Coppola on the importance of the unseen path

Smartly dressed and looking younger than a woman enjoying her seventies, Eleanor Coppola is a portrait of poise. When it’s suggested that she’s the de facto grand dame of Sonoma County’s wine scene—given the epic, family-friendly winery and resort that bears her husband’s name in Geyserville—she doesn’t take the bait.

Eleanor Coppola is far too grounded and earnest to be susceptible to such platitudes. A few moments with her and one realizes she’s not someone interested in the limelight so much as, say, the use of quicklime lighting in 19th-century theater. As an artist, she has more practical concerns. Chiefly, what’s next?

“I’m going into my studio everyday, and it’s really great to have a time of transition, where you can look in your books and make sketches and think about all things you might want to be doing in the future,” says Coppola. “Right now, I’m making a series of watercolors. I don’t know where that’s leading, but part of it is going down the unseen path.”

That “unseen path” has led Coppola through a dizzying array of life experiences. Despite being the wife of film phenom Francis Ford Coppola and the mother of filmmakers Roman and Sofia Coppola, Mrs. Coppola has always followed her own star.

But even before Hearts of Darkness, Coppola enjoyed a varied career in visual arts. In the early 1960s, she was creating commissioned decor for restaurants and hotels, working closely with architects and generally applying her eye to an array of creative projects, including a mural for the airport in Las Vegas. When she was offered a gig working with the art director on the set of Dementia 13, a gothic horror picture helmed by a new unknown director in Ireland, the gig appealed to her innate spirit of adventure.

Nearly a dozen documentaries to her credit later, the question looms—would she have continued to work in film had she not met Francis?

“When I got there, I started getting homesick and really missing my life at home. Francis was in this wonderful creative ferment, and it was very exciting for him, but I was just starting to fade,” she explains.

The film’s distributor had intended to send a crew to the Philippines to shoot a short promotional documentary about the film, but the director elected to handle the promo in-house to keep them away from an already beleaguered production.

“Everybody had a job but me. I had made these little art films in the early ’70s. He said, ‘It’s five minutes, you can get it, Ellie,'” Coppola recounts. “It grew organically, and I really got into it. Again, it was a visual expression.

“My nature is to try things I don’t know how to do—one after the other. Dance costumes? I’ve never done that, but let me try!” she says, referring to her work with the Oberlin Dance Collective. “Write a book? I’m not a writer, but I’ll give it a try!” Notes on a Life, an autobiography, was published in 2009.

“The Eleanor Coppola that I know is a celebrated filmmaker, author, photographer, designer and artist. She is collaborator and confidant to one of the world’s great directors, managing to hold his interest through 50 years of matrimony,” says Jay Shoemaker, CEO of the Coppola Companies, who has known Coppola for many years. “A creative force in her own right, she has now added a complex and delicious wine to her portfolio.”

Indeed, Coppola has literally put her signature on the other family business—wine. A blend of Syrah and Cabernet Sauvignon (“I like Syrah, especially when it’s used in blends,” says Coppola), the fruit is sourced from both the Sonoma vineyard and their historic Inglenook property in Napa. Award-winning winemaker Corey Beck, who has worked for the family for more than 15 years and knows Eleanor well, was able to craft a wine that reflects her personal tastes. She designed the label featuring her own autograph, which serves as the wine’s brand and personal endorsement.

“I’m totally delighted. It turned out better than I expected. I didn’t know it would be so good. I’m very appreciative of Corey’s work. The whole thing was fun,” she said. “I think that you should be doing work that’s fun.”

Besides working with the winemaker, Coppola works with other winery talent to put her signature touch on the entire visitor’s total experience.

“We’re very fortunate to have Ellie readily available to lend her artistic and critical eye to our work. She always goes beyond a simple ‘yes’ or ‘no,’ taking the time to explain where she’s coming from,” says Janiene Ullrich, director of shared services for Francis Ford Coppola Presents. Ullrich is tasked with sourcing the myriad merchandise sold at the winery. When traveling, Coppola often contacts Ullrich with the details of an item that has caught her eye, and Ullrich endeavors to bring it to the winery.

The merchandise then serves as both a keepsake for winery visitors as well as a mnemonic for Coppola. “It often unravels into a great memory or story, and it’s a treat to hear her tell it,” says Ullrich of the various textiles and scarves, jewelry and plates that find their way to Geyserville.

Recently, while her husband was on business in China, Coppola ensconced herself in her rural, creative space and let her muse lead her where it would.

“I literally moved into my studio for four days and three nights,” she recalls. “It’s a little bit like camping. It doesn’t have a shower, there’s a hotplate, the basics. I just stayed in there and hiked around nearby. It’s been really interesting,” she reflects. “I’ve never been alone. All my life, I’ve had kids, I’ve had a husband and family around me. Sometimes, I’ve been to a hotel for a couple of days or something, but there’s still interaction. I had no phone, no email, no interaction with the outside world. Just me in my space and nature surrounding was a very deep experience.”

One of Coppola’s guiding principles could be summed up simply: “Find what you’re meant to do, and do that.”

“If you’re really doing what you’re meant to do, there are a lot of wonderful highs. In the creative process, there are also a lot of discouraging moments when you can never reach your internal vision, and the frustration that you can’t get things exactly right,” she says. “I think life should be a process of doing what you do well and enjoying it.”