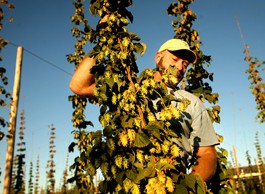 Beer is a processed food. It is made from preserved ingredients, often pulled out of dry storage a year or more after harvest for shipment to breweries around the world. Many factories that make beer approach the beverage as a mass-produced product, like Snickers or Coca-Cola, one that must taste predictably the same batch after batch. But craft brewers have recognized the connection between their beer and the earth, and to celebrate each autumn’s hop harvest, these beer makers brew up limited batches of the latest innovative trend in brewing: wet-hop beers.

The vast majority of beer is brewed using hops that have been dried. Drying significantly detracts from the aromatic properties of this flower, as its bitter acids and aromatic oils evaporate in the 140-degree baking kilns. Dried hops are compressed, packed and bundled like hay and can be used anytime, anywhere.

Fresh hops cannot. They signify a tangible time and place, and the beers they go into are a seasonal product of the harvest. Brewers who live in growing regions like the Pacific Northwest enjoy obvious advantages in brewing wet-hop beers, as they stir the fragrant unwilted blossoms into the beer just minutes or hours off the vine. Ninety percent of the production of American hops comes from Oregon and Washington, and there the wet-hop beer trend has found a strong foothold in the presence of 40,000 acres of plantings.

Still, California’s brewers are getting in on the wet-hop action, and each year many breweries pay top dollar to overnight fresh hops to their facilities. In fact, Chico’s Sierra Nevada Brewing Company made the first North American wet-hop beer in 1995 with fresh Cascade and Centennial hops flown in from Washington. But brewer Steve Dresler wanted to bring the freshness factor even closer to home, and five years ago he planted three acres of hops on the land adjacent to the brewery for sole use in the now annual Chico Estate Harvest Ale, released in its third vintage in September along with the 12th vintage of the original Washington state Wet Hop Ale. Each of the malty ales borders between an India pale and an amber, with a particularly fresh and herbal hop character.

Lagunitas Brewing Company has also been stirring fresh Washington hops into specialty batches the last two falls, and this fall owner Tony Magee grew and harvested over 300 pounds of hops from a third of an acre east of Tomales Bay.

“People told us they wouldn’t grow here, that it was too cold or too windy, but as near as I can tell these guys are rock stars,” says Magee. “You just put this rhizome, this little stick, in the ground, and up comes this prehistoric-looking vine.”

The small hop orchard has served as a successful experimental crop, he says, and this spring six more acres will be planted.

“Growing your own hops gives you a little more ownership in the whole process,” says Magee. “It gives you a deeper understanding of the mystique of brewing beer. It’s like the winemaker who also grows his own grapes.”

“That would be a stretch, but not impossible. In wine, the grapes are 100 percent of the wine. Hops contribute far less than 1 percent of the final beer’s weight. No doubt, someone skilled could taste and identify some crop differences by year, location or growing climate, but I can’t say I have that skill.”

Mark Vickery, brewmaster at Golden Valley Brewery and Pub, just south of Portland, has now made five consecutive vintages of a wet-hop ale sourced with hops grown 10 miles from the brewpub. Vickery, a wet-hop beer innovator who founded the now annual Fresh Hop Beer Tastival in Portland four years ago, wishes to instill in his beer a unique sense of locality, and though he and others easily market this angle to fascinated brewpub customers, Vickery feels that terroir remains elusive in a product as processed and contrived as beer.

“Terroir has a hard time translating to beer. With wine, everything—the grapes and the yeast—can be gotten from the same place. With beer, that’s not quite possible.”

Yet multiple breweries in the North Bay are cutting out the food miles and bringing hop production into their backyards for the simple sake of having an “estate” wet-hop beer. Moonlight, Dempsey’s, Moylan’s and Russian River, in addition to Lagunitas, all grow hops onsite or nearby for use in harvest-time wet-hop ales. The climate here may be far from perfect, as farmers in the Northwest claim that happy hop vines like a good freeze each winter, but for Peter Burrell, owner and brewer at Dempsey’s, growing results thus far have been satisfactory. On a two-acre farm west of Petaluma, he is growing a handful of vines, and an annual crop of 15 pounds has contributed to five vintages of wet-hop beers. The current release, the fresh-hop Red Rooster, is on tap at the riverside pub. With wet-hop beers, Burrell says, the control that the brewer exerts on the beer is limited; a limited supply of hops in turn limits the ability to fine-tune the beer, and what the season provides is what you get—much, he notes, like a vintage of wine.

Bear Republic’s brewmaster Richard Norgrove, who makes a wet-hop pale ale each year, has had less success than others in growing local hops. He attempted to do so on his grandmother’s property in Windsor, but poorly drained soil led to root rot and stifled the health of his vines for several years. Eventually Norgrove abandoned the project and now sources fresh hops from Washington’s Yakima Valley each fall.

At Moylan’s Restaurant and Brewery in Novato, several hop vines are growing along the back wall of the brewery in the parking lot. Brewer Denise Jones harvested a hop crop of approximately one pound in the fall of 2007 and used Yakima Valley Warrior hops for her wet-hop ale. This year’s estate crop was a bumper, harvested in the last week of October, and will be on tap this fall. Jones will also be releasing several other beers with fresh Northwest hops this month, including a double IPA, a triple IPA and a bottled barleywine.

At Sierra Nevada, as orchard managers boost the hop acreage from three to 10, all of which will swing into full bloom by next fall, brewer Dresler also has his eye on 35 acres nearby that he believes could look lovely dressed in golden shimmers of barley, making feasible the idea of a fully estate produced beer.

But Lakefront Brewery in Wisconsin may have beaten Sierra Nevada to the punch. Here, managers are arranging to pull together all the essential agriculture elements to make a “100-mile beer.” Lakefront has struck contracts with six local organic farmers to custom grow its hops—though whitetail deer ate the entire harvest this summer—and on another nearby property a farmer has dedicated 80 acres to beer barley.

However, on a full-production scale, estate beer is not a feasible idea for most breweries. Sierra Nevada alone would require hundreds of acres of hops and even more of barley, and the agricultural infrastructure of beer-making requires highly regional and established industries. There is no room in the Central Valley for both hops and barley, says brewer Dresler.

“The idea of cottage malting houses for each brewery just isn’t feasible,” Dresler says. “The industries behind beer-making are huge.”

This reality will likely persist for the foreseeable future, and wet-hop beers will likewise remain a limited portion of America’s beer flow—a celebratory event which brewers frequently liken to Beaujolais Nouveau. Anyway, Hunt at Moonlight says wet-hop beers are too susceptible to idiosyncrasies of season and harvest for a brewer ever to rely upon as a staple product.

“Financially, fresh hop beers are failures, but brewers don’t make them for the profit. We make them because they are the highest honor we can give to the hops. We love hops and know that there’s no other way to get these most ethereal fresh flavors into a drinkable form.”

The season only comes once per year, so taste the flowers while you can.