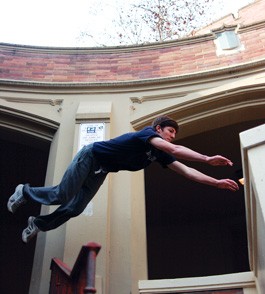 According to Ryan, I’m ready to double-kong over picnic tables. I’ve already mastered a monkey jump, a cat walk, a cat leap, a speed vault and a few precision jumps. Come to the jam on Sunday with the other traceurs, he insists. I’m a natural. Right?

What I am is sore.

I’ve just spent a weekend immersed in parkour, a vigorous gymnastic practice rapidly blazing across the urban landscape. In the Bay Area, where two organizations promote the culture with monthly jams and regular training sessions, it’s never been more alive and encouraging of new practitioners, or, in the original French, traceurs. Ice, ibuprofen and Tiger Balm not included.

What is this new mystery sport? Parkour, or l’art du déplacement, is a noncompetitive discipline regularly defined as the art of overcoming obstacles in the most quick and efficient way possible using only one’s body. But since its inception in France in the late ’80s, generally credited to David Belle and his childhood friend Sébastien Foucan, it has collected elements of gymnastics, track and field, ninjutsu, combat training and general trickery to evolve into a fascinating and eye-catching method of traversing the urban environment. Think of it as Chuck Norris meets Nadia Comaneci.

Thanks to shows like MTV’s Ultimate Parkour Challenge, movies like Casino Royale (featuring Foucan) and District-13 Ultimatum (starring Belle) and even a parkour spoof on an episode of The Office, parkour is more popular than ever. I got a basic run-down of the phenomenon by packing up my shorts and deodorant and heading to CrossFit Marin, where Andres De La Rosa, 35, and Ryan Fulmer, 21, teach classes to everyone from a four-year-old boy to a 40-year old woman who plays violin with the Philadelphia Philharmonic.

“Kids, when they’re like three, four and five, they seem to be running around doing a little baby version of parkour,” De La Rosa says, “and in a way, they’re just learning how to traverse their environment.” As people get older, he points out, they lose that natural curiosity, and parkour is a good way to rediscover it. Most traceurs, much like street skateboarders, are constantly assessing their urban environment and adapting quickly to its unpredictable terrain.

Fulmer and De La Rosa work like opposite sides of the same sawhorse. Routinely and hilariously in disagreement with each other, they give two different approaches to the sport, both of which are valuable. Fulmer is what’s referred to as a “huck and chuck” instructor, basically kicking his birds out of the nest and watching them freefall into a shoulder roll. De La Rosa, on the other hand, stresses personal fitness and safety, and when he leads me out to drill some basic safety maneuvers, Fulmer cups a hand to his mouth and whispers, shaking his head in mock protest, “This here, this isn’t parkour.”

De La Rosa starts me out with some simple extensions, head rolls and shoulder rolls, making sure I have orientation and know what to do in the event of a fall. He has me trip myself backward and come out of it into a candlestick rock, protecting my head by keeping my body “hollow,” or arched. He shows me some simple precision jumps, and soon has set up a basic obstacle course with boxes and mats. I jump off a wooden box, over a block, slap the ground, run and monkey-jump a block, drop and shoulder-roll out.

This is not easy, at least mentally. I find myself mapping my moves ahead of time but relying on a hazy instinct for motion while in the rapid throes of momentum, and sometimes stepping with the wrong foot or rolling raggedly. I am not a particularly athletic or coordinated person, I explain, but they insist that I am doing well.

Ideally, De La Rosa says, I would have much more basic training before advancing to technical moves. But Fulmer must see something in me—though I’m not sure quite what it could be—because he starts setting up larger blocks and pads inside the gym in what seems like a recipe for disaster. “OK, get in here!” he shouts.

In contrast to De La Rosa’s gym gear, Fulmer is in jeans, black-frame glasses and a tight black T-shirt. At just 21, he has several physical parkour trophies: calluses across his palms and a sizable calcium deposit on his shoulder, like a sub-epidermal doorknob. He hooked up with Bay Area Parkour a few years ago and started their monthly “jams,”gatherings of enthusiasts in different cities around the Bay Area, and now teaches “pure” parkour, venomously eschewing the “free running” approach of wall flips and showy tricks. His goal for me today is to land a double kong, whatever that is, and he’s got about 20 minutes to do so before the next class starts.

So we run some jumps. With unstoppable confidence, Fulmer pushes me to the next difficulty level as soon as I complete each maneuver. I leap up a large block, navigate myself over with my hands and land poorly on my side. Whoops! Try again: good. Next! Leap atop the block, jump down, shoulder-roll. Good. Next! Jump over the entire block, shoulder roll. Great!

As tiring as this is, I seem to be making fast progress, and after some forward and backward cat-walking on a balance beam, I’m full of genuine anticipation when Fulmer says it’s time to square up two large blocks together. This is the double kong, he says, and bolts into a run. Slapping the blocks once each with his palms, he leaps them both in a single bound, lands in a run and coils back to talk me through the move.

Run faster, jump higher, and keep your head up, Fulmer says. Motion is the key, he stresses, adding that “a lot of parkour is just catching up to your own momentum.” He tells me to “pop hard,” look forward, throw my legs up over my head as I go over the blocks and to somehow, some way, land on my feet. What the hell. There are mats.

So I tear off into a run, pop as hard as I can and invert my lower body in the air. I push off the first block with my palms, then whiz by and slap the second. I enter that magic zone where I’m not thinking anymore and am utterly stupefied when I notice that I have somehow, some way, landed on my feet.

I wasn’t about to jump over cars anytime soon, but I knew I wanted to hit some actual streets with Brett Robert. A 30-year-old teacher’s aide, Robert is one of Santa Rosa’s most high-profile traceurs and a mentor of sorts to people like Christian Fairfax, 18, and Michael Corley, 19, who gathered on a recent morning at a local high school to train.

While Corley and Fairfax practice running flips and precision jumps along tall, skinny banisters, Robert, somewhat sheepishly, admits that he got into parkour the way most do—by watching videos of it on YouTube. About two years ago, a nasty judo injury had torn his knee’s meniscus, and he was walking on a cane for four months when he discovered Oleg Vorslav’s famous Dvinsk Clan ‘Le Parkour‘ video. He threw the cane away and started practicing on his own. “Coming from a punk-rock background,” he says, “at first I was like, ‘If only I could find someone to teach me!’ But then I was like, whatever—do it yourself.”

One might never guess from his ebullient spirit and fluidity of motion, but Robert is an ex-heroin user and alcoholic who drank and used drugs for a decade before entering a group home six years ago. He’s been clean ever since, and evades the go-to motivational speaker’s stance of comparing the high of parkour to the high of heroin. Yet parkour plays a part in his recovery, he says, because “it’s really, really positive. It’s like going back and healing all of that stuff. A way of making amends.”

The tight-knit parkour community, Robert says, is where he finally found his place to belong. “After years of searching in the bottle and in the spoon, I found a spiritual solution and a way to stay clean, a way to feel normal without getting high,” he says. “Freedom from addiction is more than I could have hoped for, but I still wasn’t happy. It wasn’t until I found parkour a few years after that I found a path to happiness.”

As with the younger people he trains, he runs me through some precision jumps from varying heights, stressing the absorption of impact. I learn speed jumps and speed-safety jumps—essentially side vaults over obstacles too high to leap over—and we do some monkey jumps. A concrete surface changes everything psychologically, so there’s no way I’m flinging my body sideways through the air and double-konging anything outside the gym. Still, the act of applying skills in a somewhat real-life setting—walls, benches, banisters—feels much more renegade and authentic outside.

“Authentic” and “pure” are words tossed around in the parkour community quite often; message boards provide endless and sometimes acrimonious debate on what’s “pure” parkour, and as Fulmer told me, there’s a huge rift between the practitioners of “free running” and parkour. Parkour is all about efficiency; free running stresses a more lackadaisical approach to the urban environment; none of it means anything. “All the controversies that happen in parkour, they happen online,” Robert says. “They never happen in person.”

Fulmer noticed this static disconnect between traceurs, and started the Bay Area’s monthly Parkour jams, where the online community gets together and trains face-to-face in parks, schools, buildings and beaches around the Bay Area. The next one is tomorrow, and every traceur I’ve talked to has invited me regardless of my beginner status. But it’s not the long drive or the chance of rain or even any perceived inability on my part that keeps me away. It’s that I’m so sore I can barely type, let alone vault my tired body over some trash cans.

I’m not alone. “A lot of people within the parkour community,” Robert says, “are afraid that we’re going to experience massive growth from getting more media attention; from there, being more commercial . . . But I personally think parkour’s not going to become massively popular, because it’s hard.”