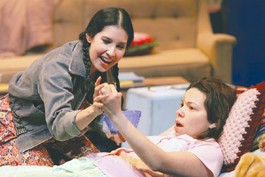 MTC's transcendent 'Lydia' is imperfect, but still demands to be seen

Lydia, by the fast-ascending Bay Area playwright Octavio Solis (Bethlehem, Gibraltar, June in a Box), is two plays intertwined in one. In its West Coast premiere at Marin Theatre Company, the first act and the last 10 minutes of the second act are among the best plays I’ve seen in years. In these portions of Solis’ ambitious work, Lydia is achingly lyrical, breathtaking in its inventiveness and heartbreaking in its view of the dark, shimmering heart of senseless tragedy and the wounded but still hopeful humanity of its characters.

In MTC’s production, Lydia, at its best, is brilliantly committed, carefully planned and precisely paced by director Jasson Minadakis, a beautiful execution of the playwright’s vibrant vision of a 1970s El Paso, Texas, where the emotionally scarred, Mexican-American Flores family lives in a fishbowl-shaped house, and a brain-damaged daughter spins desperately beautiful webs of words even as her body lies trapped in near silence on her bed.

Frustratingly, the other play—the one that occupies the bulk of Lydia’s second act—is a run-of-the-mill family potboiler bordering on the melodramatic that is ramblingly structured and bizarrely paced, with a smattering of unsatisfying character arcs and abrupt endings which lead (at last!) to the real ending, the one that belongs to the first Lydia, an ending that is both shocking and lovely, magnificently tragic and absolutely perfect. In spite of its flaws, Lydia is a play that simply can’t be dismissed, its achievements far outweighing its faults.

Our sometime narrator is the semicomatose Ceci (a truly astonishing performance by Gloria Garayua), stricken on the eve of her Quinceañera in a car accident that has shattered more than windshield glass and Ceci’s young life. Crushed by a mix of anger, remorse and guilt, Ceci’s brother Rene (Lakin Valdez, excellent) has embraced a self-destructive lifestyle of macho posturing and late-night brawling, while their overworked, still-hopeful mother, Rosa (Wilma Bonet), has traded her lifelong Catholicism for the miraculous promises of a local Holy Roller church.

Rosa’s husband, Claudio (Luis Saguar), an undocumented immigrant too distraught over his daughter’s condition to even look at her, has become a monster, either locked in alcohol-fueled silence before the TV or exploding in violence against his youngest son, the sensitive poet Misha (David Pintado), the only Flores who treats Ceci as if she were still a member of the family, reading and talking to her as she lies convulsing and murmuring on her mattress in the living room.

Ceci’s cousin Alvaro (Elias Escobedo), recently returned from Vietnam and signed up, to the irritation of his family, as a border patrol officer, was once the object of Ceci’s adolescent desires, and his appearance threatens to reveal the secret of what really happened the night of Ceci’s accident.

But the largest threat to the family’s status quo, for bad and good, is the arrival of Lydia (Adriana Gavira), the feisty, spirited girl-woman Rosa hires as a live-in maid. Her instant bond with Ceci, and her casual insistence that Ceci can communicate with her, rattles some members of the family while charming others—including Ceci. Enigmatic, resourceful and casually intoxicating, Lydia appears at first to be the family’s savior, but even she cannot alter the Flores’ crash-course with destiny.

Underscoring everything is Ceci’s lively inner monologue, fueled by the appropriate amount of teen angst and pent-up sexual yearnings. As Garayua rises from the bed to bound around the room (a fine functional set by Robert Mark Morgan), jumping on the couch, sneaking up to sniff her brothers and parents, her comments are alternately directed to the audience (describing the accident: “The Pontiac was wrapped around the pole like a lover, and me flying in the air through confetti glass”), to her unhearing familia, and to God (“How could you take so much of my brain and forget to take the part that wants the hokey-pokey?”).