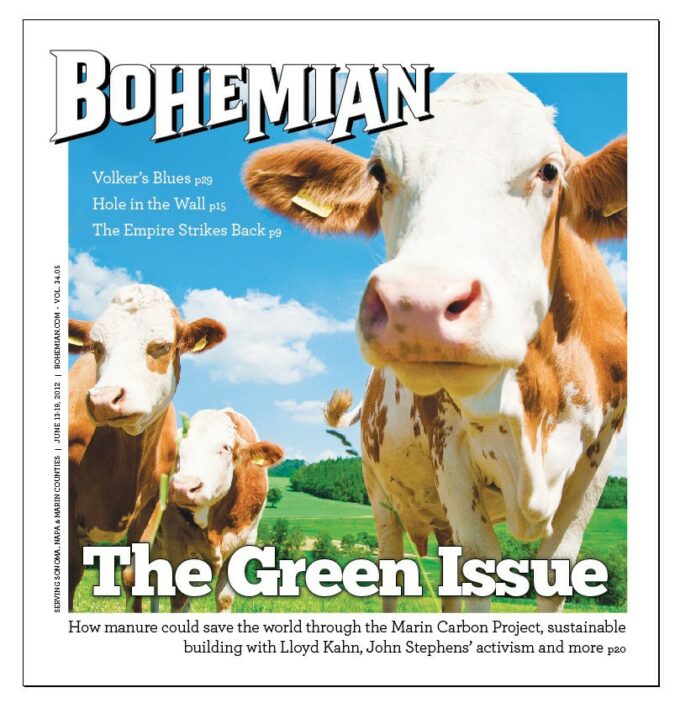 When it comes to climate change and the impending disaster it spells for life on earth, good news is hard to come by. Many climate scientists say we’ve already reached the point of no return. But thanks to the work of a team of scientists working in West Marin, the end may not be so near.

For the past four years, the Marin Carbon Project has quietly been conducting research in the grasslands and pastures of Marin and Sonoma counties that, if borne out, may just save us all. In a nutshell, the group’s research has shown that by making small changes in how grasslands and rangelands are managed, carbon can be removed from the atmosphere and stored in the soil. If these practices can be disseminated and practiced broadly, they could move the dial on climate change.

And it could be as easy as spreading cow manure on the ground.

First, a quick science lesson: there is a fixed amount of carbon on earth. This carbon moves between several large pools—the atmosphere (carbon dioxide), the earth (carbon, i.e. oil, coal), the ocean (carbonic acid) and in humans and all other living things (carbohydrates). While climate-change deniers disagree, it’s widely accepted that things started to go south when humans began to burn soil-based carbon, releasing it into the atmosphere. The increase of heat-trapping carbon dioxide in the atmosphere has given us climate change—and a very uncertain future.

Riding bikes, using solar power and drying clothes on the line all help reduce carbon emissions, but the troubling fact is that these necessary efforts will only slow the rate of climate change, they won’t stop it. We need something else to reverse the earth-warming feedback loop already forcefully underway.

Enter the Marin Carbon Project. While peer-reviewed results are due to be published as soon as this summer, preliminary findings of the group’s work are enormously encouraging.

It all began when researchers spread a half-inch layer of compost onto John Wick and Peggy Rathmann’s Nicasio ranch to see what impact it might have on banking soil carbon. Previously, the group had sampled soils on 35 plots in Sonoma and Marin counties, and found that those with the greatest soil carbon had been covered with large amounts of manure. Manure can stoke photosynthesis in plants, pulling carbon out of the air and into the soil, but in large quantities it can pose health and water hazards. So the researchers settled on the use of compost for their research.

What they found amazed them.

“This is the most exciting news on earth right now,” said project director Wick.

In addition to the compost study, the group is also looking at how cattle pasture can increase soil carbon; properly managed, cattle can help grasslands thrive and increase carbon uptake in the soil. Jeff Creque, rangeland ecologist and cofounder of the Marin Carbon Project, said the results are very promising.

“Our soils are a huge potential reservoir,” he said. “Soil carbon offers the most hope.”

Once the carbon project’s work has been published, the group wants to distribute its findings to landowners, farmers and ranchers. A delegation of Chinese officials has already visited West Marin to tour the project. China, by the way, has the world’s largest grasslands, in Mongolia. Given that one-third of the earth is covered with grasslands, the potential to scale up the project is vast, said Torri Estrada, consulting director of the project.

“You start to think of the scale of rangeland in California alone, and it starts to make a big dent in reducing metric tons of carbon.”

How much carbon needs to be removed from the atmosphere to roll back climate change is a key question, and one that doesn’t have a definitive answer yet. But data shows capturing carbon in the soil can be the way to do it, Estrada said.

“We know technically it can work. The scale is the issue.”

If the science bears out and the group’s methods are repeatable, the implications are potentially huge. Industrial, chemical-intensive agriculture is responsible for as much as one-third of climate-changing gasses. But by focusing on practices that sequester carbon, agriculture can become a big part of the solution. Farmers who increase carbon in the soil may be able to tap into the emerging carbon market. The production of compost, which in itself performs a huge service by diverting green waste from landfills where it can emit climate-warming methane gas, will become a growth industry of green jobs.

And we may not leave a smoldering globe to future generations—or this generation.

“Anywhere you have a piece of soil, you can sequester carbon,” said Jeff Creque, agro-ecologist and cofounder of the Marin Carbon Project. “To me that’s a wondrous thought. Anyone can do it.”